One day in 1925 vaudeville promoter George Beaucham approached banjo-maker John Dopyera. It was the era of silent movies, in which a piano and sometimes orchestra supplied live sound at cinemas, and Beaucham had a challenge: could Dopyera, 31, make him a guitar loud enough to be heard over other instruments?
Dopyera set to work, and over the following months invented a guitar with three aluminum cones mounted underneath the bridge, an amplification scheme similar to the diaphragms inside a speaker. The instrument was 3-4 times louder than a normal acoustic guitar and had a rich, metallic tone, as though it were being played in a large metal basin. 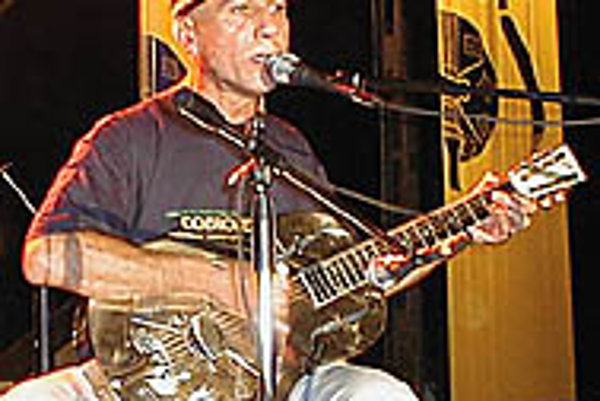 Bluesman Peter Radványi on the nationality of the Dobro guitar's inventor

One day in 1925 vaudeville promoter George Beaucham approached banjo-maker John Dopyera. It was the era of silent movies, in which a piano and sometimes orchestra supplied live sound at cinemas, and Beaucham had a challenge: could Dopyera, 31, make him a guitar loud enough to be heard over other instruments?

Dopyera set to work, and over the following months invented a guitar with three aluminum cones mounted underneath the bridge, an amplification scheme similar to the diaphragms inside a speaker. The instrument was 3-4 times louder than a normal acoustic guitar and had a rich, metallic tone, as though it were being played in a large metal basin.

Broadly known as the resophonic guitar (sometimes called National or Dobro), it became a staple in jazz clubs and movie houses across the US. All told, up to 100,000 were sold between 1929 and 1935.

Then the electric guitar was invented. With volume no longer an issue for guitarists, Dopyera's magnum opus became a footnote in music history.

Footnote, that is, until the 1960's and 70's, when blues and folk musicians rediscovered the resophonic sound on classic American records. Interest in Dopyera's invention took on a second life, and in the 1990s spread back to Slovakia, the country of his birth.

"Around 1989 we discovered that Dopyera was from Slovakia," said Slovak blues guitarist Peter Radványi. "Until then he was always mentioned in the international press as a Czech or Soviet."

In 1992 Radványi co-founded the Dobrofestival in western Slovakia's Trnava, a week-long gathering of resophonic guitar enthusiasts including some of the best bluegrass, blues and Hawaiian guitar players in the world. This year's festival, which ran August 28 to September 2, marked the 75th anniversary of Dopyera's first resophonic patent.

The Trnava Dobrofestival is the only festival in the world devoted exclusively to the Slovak American inventor, according to Dopyera's son John Edward, 72, who was in Trnava for the event.

"In the states there are slide-guitar and bluegrass and blues festivals with concentrations of dobro guitars and players," he said. "But nothing like this."

John Dopyera never visited Slovakia after leaving at age 14, although he spoke Slovak to his 10 siblings his entire life. His family was from the village Dolná Krúpa outside Trnava, where his father was a miller for a Hungarian count and made instruments, mostly violins, on the side.

John Edward Dopyera says that the family's circumstances shaped his father into a simple craftsman with little interest in business. John Dopyera's parents had moved to the US because they sensed a war coming in Europe and didn't want their boys to be "cannon fodder".

"As a result of the massive disturbances - wars, political upheavals - in Slovakia in my father's lifetime, he was afraid of change. He devoted himself to his work. He only wanted a simple, honest life," said the younger Dopyera.

The history of the resophonic guitar was likewise shaped by Dopyera's immigrant experience. At the turn of the century, few central Europeans lived on the American west coast; those that did were treated as second class. After founding the National guitar company in the late 1920s to build the resophonic, Dopyera felt taken advantage of by his partners, and struck out on his own.

"The company had flyers printed that said George Beaucham was the inventor," said John Edward Dopyera. "My father didn't demand a lot of money, he was never rich, but he at least wanted credit."

Dopyera split with Beaucham to start the Dobro guitar company in the early 1930s. The name had a double meaning: 'do' taken from Dopyera plus 'bro' from brothers, with dobro also being the Slovak word for 'good'. Dopyera's brothers later moved to Chicago, where they made millions of dollars with the Valco music company and other business interests.

John Dopyera elected to stay in Los Angeles and continue making instruments. He was never rich, and was famous only among a small circle of people who knew he had invented the resophonic guitar. He died in 1988 aged 94, having registered some 40 patents.

Interest in Dopyera's resophonic guitar was stirred in the 1960s by blues and bluegrass musicians who wanted to emulate the vintage sound they heard on 1930s American records. At the time the guitars were being sold for relatively small sums, often turning up in junk or antique shops. John Edward Dopyera said he'd heard of them trading for beers in a bar. But after a popular band put a resophonic guitar on a CD cover, resophonic guitars became a hit for the second time.

"In the late 1980s, dobro guitars were still going for only a few hundred dollars," said Bob Brozman, an American musician at the Trnava Dobrofestival. Brosman has written a book on Dopyera guitars. "Then [American rock band] Dire Straits put an old National guitar on the cover of their album Brothers in Arms in 1989, setting off a wave of interest."

Today, vintage resophonic guitars trade for anywhere from $2,000 to $5,000. Some, owing to their lustrous, art deco design, hang in art or antique collections.

"Their value has increased by 1,000% in the past 15 years," said John Edward Dopyera, who donated five guitars from his late father's collection to a Trnava museum in 1996. He estimated that between 20,000 and 30,000 original Dopyera guitars existed today.

Dopyera was involved in two companies and took out three resophonic guitar patents between 1926 and 1935. Nationals, a truncated version of his first company's name, are brass-bodied, chrome-plated guitars with either a single or triple-cone system inside. Dobro guitars, taken from the second company's name, are made of wood and have a single cone.

Nationals are preferred by blues and Hawaiian music players, dobros by bluegrass musicians. Resophonic guitar is the umbrella term.

Six companies today make resophonic guitars, including four American, one Korean and one Chinese, as well as 30 independent instrument makers, including a man from Prague. They sell for around $1,000.

"Resophonic guitars have the best sound for blues," said Papa George, a finger-picking London bluesman who said he fulfilled a two-decade wish by buying a 1932 National guitar in 1998. "I've wanted to buy one since the seventies but couldn't afford it."

"If you listen to classic Hawaiian records, they all have that National sound," said Hawaiian slide-guitarist Ken Emerson, who owns nine resophonic guitars. "To get the exact sound, you have to have an old one. The new ones are close but not quite there."

"I own three myself," he said. "With dobro guitars it's like love at first sight."