When asked of the whereabouts of one of Pezinok's locally famous wine makers, an old man making his way home from church rubs his scruffy beard, blinks and then points up the road to a dark wooden wine press in front of a small stone house barely visible through the falling snow. "There," he says, "that there Ľudovit Tretina has some good wine. Go on up there."
A sign warning visitors of a mean dog marks Tretina's winery door. After minutes of buzzing the doorbell, the snapping of unlocking bolts and the barking of the (presumably) 'bad' dog becomes audible. 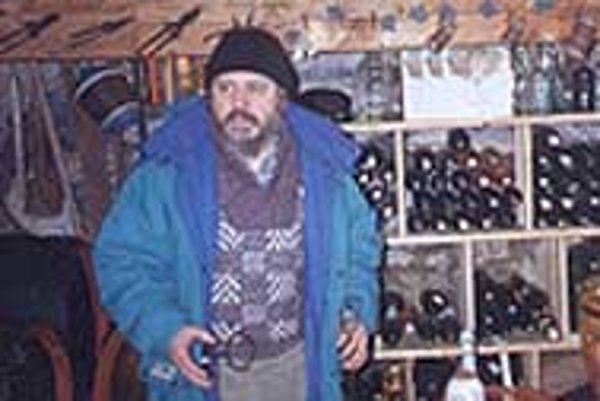 Font size:A-|A+  Comments disabled
When asked of the whereabouts of one of Pezinok's locally famous wine makers, an old man making his way home from church rubs his scruffy beard, blinks and then points up the road to a dark wooden wine press in front of a small stone house barely visible through the falling snow. "There," he says, "that there Ľudovit Tretina has some good wine. Go on up there."

A sign warning visitors of a mean dog marks Tretina's winery door. After minutes of buzzing the doorbell, the snapping of unlocking bolts and the barking of the (presumably) 'bad' dog becomes audible. A tanned man in a leather vest, wool sweater and vintner's cap opens the door, an unfriendly Doberman named Luxo restrained at his side. "Come on in," he says invitingly.

In his cosy cellar, Tretina asks his wife to retrieve a 1997 vintage Rizling vlašský from the back room for his visitors. He pops the cork, places it under his nose and inhales deeply. "This is the 97 Sauvingon," he scolds his jolly round wife. Tretina shakes his head and fills four glasses.

Gently holding the glass by its long stem, Tretina swirls the wine around to "release the fragrance." He sniffs the white wine and nods; we sip. The wine is aromatic, dry, delicious. Luxo stares enviously at the half full glasses, growling. Surprisingly, Tretina spills a few droplets of wine on the floor which the dog eagerly licks up. "We're worried Luxo might be an alcoholic," the wife laughs.

The search for a quality bottle of Slovak-made wine is not as simple as it would seem. Wine sold in shops and grocery stores almost always comes from the huge enterprises that dominate the Small Carpathian landscape just northwest of Bratislava. Although sufficient for 45 to 120 crowns, they lack the quality and, more importantly, the story of an authentic bottle of Pezinok wine. "Wine should tell a story," Tretina says. "I know... wine is in my blood."

While the suddenly popular Vinotéka (wine shops where you can sample international wine) in Bratislava have wonderful vintages from Australia, South Africa and France, they can't tell you a thing about a good Slovak wine other than Tokaj. "Pezinok wine is supposed to be good," said one waitress at the Vinotéka across from the Irish Pub in Old Town Bratislava. "We don't have any though. Would you like to try an Australian Chardonnay?"

Some might, but those thirsting for a taste of real Slovak wine must venture to Pezinok, where small wine-makers battle the odds and create wonderful wines, financing their humble ventures by selling to friends or by word of mouth.

Pavol Boriš is also a local wine maker, as well as a wine historian and the founder of the local association of wine-makers. His paying job is teaching, and he plays the part of professor perfectly. With his thick grey beard and moustache, large round glasses, rumpled clothes and worn leather bag, he rides around town on his old bike ("my wedding gift," he says with a smile).

But his real passion is wine. In a crowded Pezinok tavern, patrons send their greetings to the professor. "Thanks for the '95 Müller Thurgau, it was a real hit," shouts one. Embarrassed, Boriš suggests a quieter cafe.

While noting that wine across Slovakia is generally good, Boriš explained that the soil around Pezinok was perfect for certain wines. Rizling vlašský (Weischriesling), Veltlínske zelené (Green Veltliner), Müller Thurgau, and Rulandské biele (Pinot Blanc) are the most famous grapes grown in the region.

"Wine from Nitra or southern Slovakia is good," he says. "But it can be bland. There are few variations in flavour. You can really taste the distinctness of Pezinok wines. From year to year, soil to different soil, each wine has its own character."

Tretina agrees. "Pezinok is in a unique, God-given setting for wine-making," he explains. "The gentle slope of the Carpathian mountains means that the sun hits the vineyards as it rises in the east, peaks in the south and even as it sets and the last rays of the day are laid on the hills." Tretina says warmth is vital for grapes to form their character. He should know - Tretina won a 1999 contest in Zagreb, Croatia for best wine in central Europe for his 1997 Sauvingon.

Back at Boriš's house, he unlocks the cellar - the scent of wine immediately floats up. In small and cramped quarters, he shows off the carved wooden barrels which mark his different vintages. Through his glass tasting tube, he draws a sample of a clear golden wine known as Rulandské biele, a grape that hails from Burgundy, France.

"It's important for this wine to sit in a wooden barrel," he says. "This is one of my favourites." Smooth as velvet, the wine tastes striking, a little like vanilla but definitely fruity. Boriš smiles as he fills the glasses again.

Boriš has six different vintages of wine in barrels, and a rack of bottles from very good years. "The year of the revolution, 1989, was a good year... 1995 too." He steps back and surveys his prized cache. "This is what I've got. If one of my wines goes out of style, at least I like it."