Slovakia needs to catch the IT train

SLOVAKIA's future economic growth lies almost entirely with the need to fast-track the use of information technologies, which is significantly undeveloped, say leading analysts.
Officials and company representatives are concerned that unless Slovakia introduces IT tools into general working practice, it will fall behind its competitors, even among the newly accessioned countries. 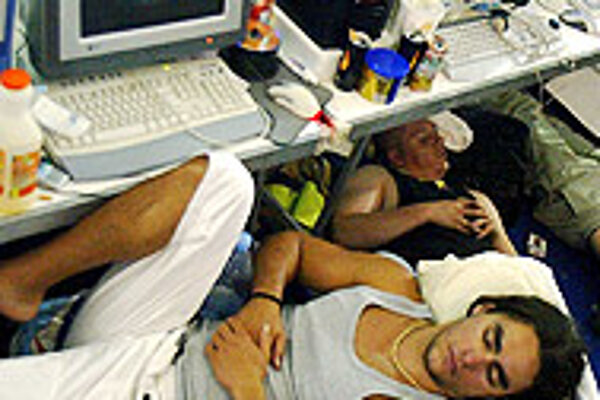 Officials and company representatives are concerned that unless Slovakia introduces IT tools into general working practice, it will fall behind its competitors, even among the newly accessioned countries.

"The country is behind [in the field of information technologies] not only among the established EU15 states but also the countries that entered the EU with Slovakia," Transportation, Post Office and Telecommunications Minister Pavol Prokopovič told the press.

Whilst the government has introduced measures to spread the use of IT, especially in schools, there are growing fears that once Slovakia becomes less of an attractive proposition to investors the republic will suffer an economic downturn.

Analysts forecast that low costs and a cheap labour force, which presently makes Slovakia an attractive proposition to investors, will gradually disappear once the purchasing power of its citizens grows.

To offset this prospect every effort should be made to create an information society and a knowledge-based economy.

And it is not only ministers who take this view.

Miroslav Majoroš, president and CEO of Slovak Telecom said: "Cheap labour cannot be a permanent competitive advantage for Slovakia in the EU. Educated citizens and the development of a knowledge-based economy will guarantee that Slovakia will become a part of a developed Europe."

He said that the experience of other countries shows that only through cooperation between government, the public sector, and private firms can an information society be built and maintained.

"Successful reforms have attracted foreign capital, but at this time we have to discuss priorities for the future. I am certain that Slovakia, being a country without important raw materials, will have to increase its effectiveness through innovations in the economy and a well-educated workforce. The strongest tool is definitely the spread of information technologies in society," emphasised Peter Weber, general director of Hewlett-Packard Slovakia.

Boris Kekeši, the general director of IBM agreed. "The experience of developed countries indicates that there is a definite correlation between productivity growth and the introduction of information technologies".

It is generally acknowledged that the government is investing in disseminating IT throughout society. But Peter Kollárik, the general director of Siemens, thinks it is important that cabinet measures must be coordinated to create one functioning system.

A recent study by the Slovak Academy of Sciences (SAV), based on data from nineteen EU countries, proved that high investment in information technologies leads to faster economic growth.

The study revealed that the ratio between investment in IT and the gross domestic product in Slovakia represented 1.59 percent of the GDP in 1995, a figure significantly below the average of other countries in transformation. The International Data Corporation estimates this ratio should increase from 2.17 in 2000 to 2.93 percent by 2006.

According to another survey conducted by the Slovak Institute of Public Issues (IVO), the highest level of competency in computer skills is in the 18 to 24 age group.People older than 60 have the lowest knowledge. And generally people living in larger cities have access to better equipment than those outside the urban areas.

"The Bratislava region greatly dominates the rest of Slovakia. Not only with better access to modern technologies but also in higher purchasing power," added Marián Velšic, an analyst with IVO.

According to the survey approximately 25 percent of respondents felt they would never have a need to use IT, and 4 percent thought they would be unable to learn the necessary skills.

Digital literacy, access and affordability of the internet, and public sector online services are crucial priorities according to Prokopovič, which the government should make policy.

"We have to identify the problems so that we will able to solve them," he added.

The minister says the best solution for developing digital literacy is to introduce information technologies throughout the education system.

"Employment in a knowledge-based economy requires the development of greater IT skills. Unfortunately most Slovak citizens do not consider digital skills and the internet particularly useful".

An inadequate IT infrastructure is another obstacle according to Prokopovič.

"Access to the internet should be available to everyone, such as in public places. But the cost of computer equipment and internet connection are the biggest barriers," said the minister.

Corporations and government are the biggest operators of hi-tech information in Europe. Utilising these sectors to access information technologies could be a positive way to increase interest and develop IT skills throughout Slovakia.

If people are able to find useful information on the internet, and come to realise that communicating with the state via the internet may save them time and money, they will be encouraged to use the technology.

Additionally, this initiative could reap savings and increase the effectiveness of the whole state administration system.