THE TINKER'S craft is part of the rich colourful mosaic of Slovak culture. The Slovak tinker tradition arose as a small, humble, house-to-house occupation in the regions of Kysuce and Trenčín in Slovakia's northwest, and the Spiš region in the northeast of the country. 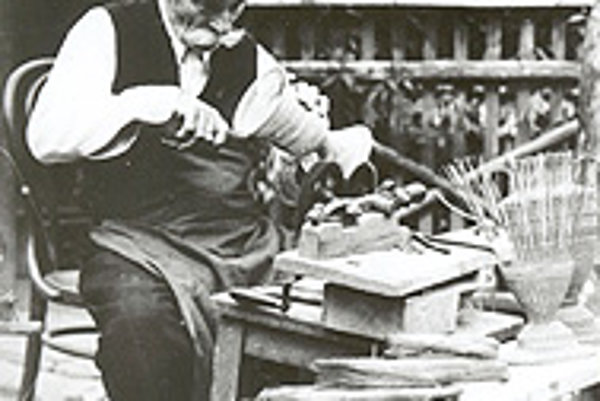 Font size:A-|A+0
THE TINKER'S craft is part of the rich colourful mosaic of Slovak culture. The Slovak tinker tradition arose as a small, humble, house-to-house occupation in the regions of Kysuce and Trenčín in Slovakia's northwest, and the Spiš region in the northeast of the country.

Some of the most interesting examples of the tinker's craft can be found in the Slovak National Museum in Martin.

The craft of the tinker developed out of Slovakia's difficult economic and social situation. The mountainous country with its poor soil meant earning a living as a farmer was nigh on impossible. People left home and travelled to other regions in search of a livelihood.

In the beginning the tinkers worked as itinerants, going from house-to-house and offering their skills. With the growth in manufacturing they fixed mainly farming implements and common household utensils, occasionally also making small items.

With developments in manufacturing came a qualitative change in tinkering. New methods of manufacturing in the 19th century influenced the tinkers. The trade took on a certain sophistication and the tinkers began to offer technologically demanding, richly ornamented items that had both aesthetic and utilitarian functions.

Some of the masters of this trade confined themselves to Slovakia, while others went farther afield, to Austria and Hungary, and the best even further. From the middle of the 19th century many active and enterprising tinkers started to open their own workshops in major cities, where they usually manufactured wares typical for that land.

Especially successful were the tinkers that settled in tsarist Russia. They set up factories with large-scale, machine-assisted production. These manufacturing methods, coupled with the experience and skills learnt in Western Europe, meant that the tinker's craft reached its zenith in this part of the Slavonic East.

The tinkers spread out all over Europe - in today's Poland, Hungary, Bohemia and Moravia, Austria, Germany, Switzerland, Belgium, The Netherlands, France as well as Great Britain. In the Balkans the tinkers originally settled in today's Bulgaria, Romania, Slovenia, Croatia and Serbia. Some of them proceeded further to Asia Minor or in the other direction to America.

In the late 19th and early 20th century many tinkers won valuable international prizes for their work. Some worthy of mention include master tinkers Jozef Holánik-Bakeľ and Jakub Šerík from Dlhé Pole, Štefan Hunčík from Vysoká nad Kysucou and Alexander Hozák from Veľké Rovné, whose elaborate utilitarian and decorative articles are well known for their unique artistic expression.

After World War I the craft began to decline as a result of the growing competition from industrial production and the limited opportunities for a life of wandering.

By the middle of the 20th century the craft virtually disappeared, yet it has never been completely erased from our lives. Master tinkers had their followers and these created new forms and set new standards of quality for this old craft. In their own individual way, graphic and other artists have used tinkering techniques in their work.

Since 1990 tinkering has entered a new period of development and the boundaries of using wire have opened.

Today we can see tinkers' techniques in wire combined with other materials in small and monumental art forms, in jewellery, bijous, and in the design of utilitarian items.

The tinker's craft tells us a story of the never-ending ability of man to continually create and re-create the new and the beautiful.