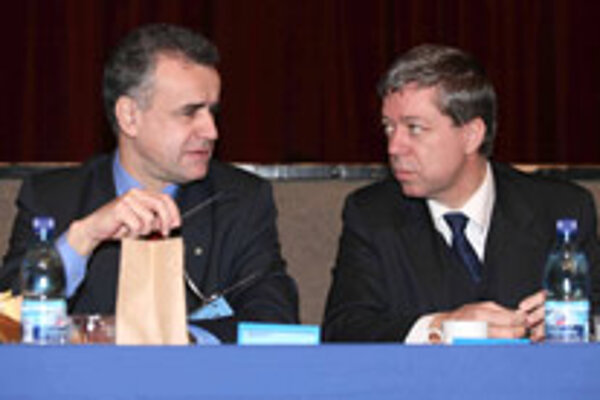 Those unhappy with where the party is heading are the co-founder of the KDH, František Mikloško, and former KDH vice-chairman Vladimír Palko, who ran a failed campaign for party chairman last summer. Pavol Minárik and František Bauer were the other departing members.

The members resent the KDH leadership for consenting to a coalition with Smer after parliamentary elections in June 2006, even though a coalition between the parties never materialised.

"Political pragmatism and opportunism have become the doctrine of the KDH," Mikloško said at a press conference. He added that this doctrine has affected every facet of the movement.

"We do not want to be in a movement where the chairman is so busy defending his position he becomes unable to give his opinion," Mikloško added.

All four members said that they would remain in parliament as independent MPs and that they so far do not intend to found their own party.

Political analyst Miroslav Kusý said that the departure will not weaken the opposition, but will affect the KDH, which can ill afford more bad news.

He doubted whether the MPs would set up new political groupings.

"These members of parliament would have big problems founding their own party because the KDH's constituency is conservative, but they're fundamentalist," he said.

"It means a strong fraying of the integrity of the KDH," he told The Slovak Spectator.

Moreover, Mesežnikov said that he had already noticed a difference between the direction the KDH was heading and the message the departing MPs were promoting.

"This group cared more about the national dimension, vigilance towards Hungarians and a bigger distance between the KDH and the SDKÚ," Mesežnikov explained.

Mesežnikov agrees that the departure will cause the KDH to lose standing, but political analyst Michal Horský disagrees.

Horský told the aktualne.sk news website that "logic says that it will influence the movement's support, but the KDH constituency is narrowly religiously inclined and has trouble deciphering these political differences."