THE VICE-CHAIRWOMAN of the opposition SDKÚ party, Iveta Radičová, should run for president. That's the conclusion of political scientists who say she has a real chance of making it to the second round, and that she should run even if she does not get the support of all the opposition parties. Direct presidential elections in Slovakia will be held during the second half of next year. 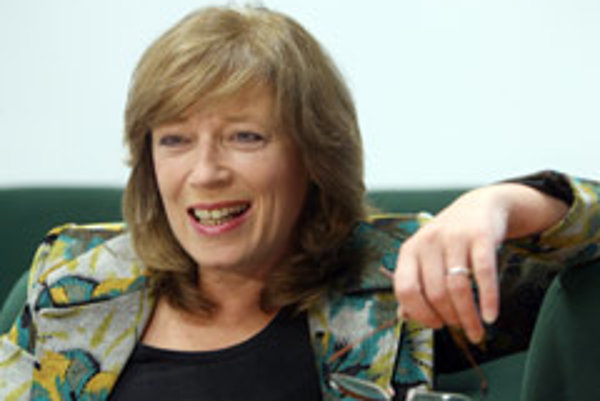 THE VICE-CHAIRWOMAN of the opposition SDKÚ party, Iveta Radičová, should run for president. That's the conclusion of political scientists who say she has a real chance of making it to the second round, and that she should run even if she does not get the support of all the opposition parties. Direct presidential elections in Slovakia will be held during the second half of next year.

Two weeks ago, the opposition Christian-Democratic Movement (KDH) set out some conditions on which it would decide whether to support her candidacy. It said Radičová should publicly express her support for the protection of human life from conception to natural death. And that she should also publicly support the traditional marriage-based family.

Radičová originally said she would only stand if she received the support of all three parliamentary opposition parties.

"I agree to my nomination for negotiations about being possible joint candidate. Now everything is in the hands of other opposition parties," she said as early as November 13, 2007, according to the Czech news agency ČTK.

Radičová reacted to the KDH's conditions on March 4 by reciting the Slovak constitution: "I can declare that for me, life, human life, is the most precious value and that unborn life is worth protecting," she told media.

But the KDH has since insisted that it needs to negotiate with the SDKÚ whether to support her.

Radičová's statement did not go unnoticed by gays and lesbians. Július Kolenič, the chairman of the civic association Inakosť - Otherness, said that gays and lesbians are equal citizens of the state, and that the president of Slovakia is their president, too.

"I thus call on Iveta Radičová to show now that she intends to be the President of all citizens of Slovakia, and to not accept conditions which would make this impossible," the head of Inakosť stated, as quoted by the weekly Týždeň.

"Mrs. Radičová cannot expect the support of both Inakosť, and the KDH," the KDH chairman Pavol Hrušovský told the TV news channel TA3 on March 11.

Asked by The Slovak Spectator why the KDH chairman was so interested in a small civic association with little political influence, the KDH spokesman Martin Krajčovič answered: "Of course, we just take into consideration the reaction of this association.

"We want Mrs. Radičová to declare publicly that she would defend the protection of life and traditional marriage between man and woman."

Radičová hinted to journalists that she understood what KDH representatives want from her. They wish her to publicly agree with a ban on abortions and condemn same-sex partnerships. She stressed that she could not fulfil such a condition.

"Protection of human life, but also the right of choice, is effective," Radičová told TA3, adding "I cannot basically change anything on my stance, as this would mean you have changed my soul".

The ethnic-Hungarian SMK party is waiting until the end of March to make a decision. Pál Csáky, the party's chairman, criticised KDH representatives for setting conditions for their support of Radičová.

"To push her into such public statements, where she will be forced to respond to the opinions of some smaller groupings, at the risk of repulsing another group, is probably not very wise," Csáky told TA3 on March 16.

Radičová admitted that Slovak voters may have problems supporting a woman for the presidential post.

"One day, this breakthrough will certainly come to Slovakia," she said last November. "But it does not mean that I will make the breakthrough."

Opinion polls published by the MVK agency at the beginning of March show that Radičová is the most serious challenger to Ivan Gašparovič, the current president. While 52 percent of people intending to take part in the election said in February that they would vote for Gašparovič, Radičová had 26-percent support.

Although Gašparovič has already gained the support of the ruling coalition Smer party and the Slovak National Part (SNS), neither the KDH nor the SMK have so far expressed official support for Radičová.

Political analyst László Öllős told The Slovak Spectator that Radičová can run without the support of KDH or SMK. In presidential elections, the personality of the candidate is the crucial thing, Öllős said. "Of course, the candidacy is difficult without party support; but support alone will not help."

Political scientist Samuel Abrahám is convinced that Radičová has a chance of winning in the presidential race. Abrahám considers it a mistake to lend much significance to whether the KDH supports her or not. Moreover, he thinks KDH support for Radičová is unlikely since the party's supporters consider her too liberal, are disinclined to support a female candidate, and are in any case divided among themselves.

"I think that if she has a good, dynamic campaign, she has a good chance," Abrahám said. "Even if she lost, she can - with her popularity - help regenerate a completely broken opposition."

Grigorij Mesežnikov, the president of think-tank Institute for Public Affairs, is also convinced that Radičová should run - even without the support of the KDH. Moreover, Mesežnikov said that Radičová is a politician who showed as Labour Minister in the Dzurinda government in 2006 that she is a successful politician.

The KDH is behaving unfairly towards Radičová, according to Mesežnikov. "The KDH sticks to several issues, and tries to push through its ideas even in these situations. I consider it regrettable," Mesežnikov told The Slovak Spectator.