Foreign Police have ways of making you wait

FOREIGNERS who decide to stay in Slovakia for more than 90 days face an initial ordeal. At the Office of the Border and Foreign Police in Bratislava, where applications for temporary or permanent residence are handled, their patience is tried in the small office by a long wait for their turn. 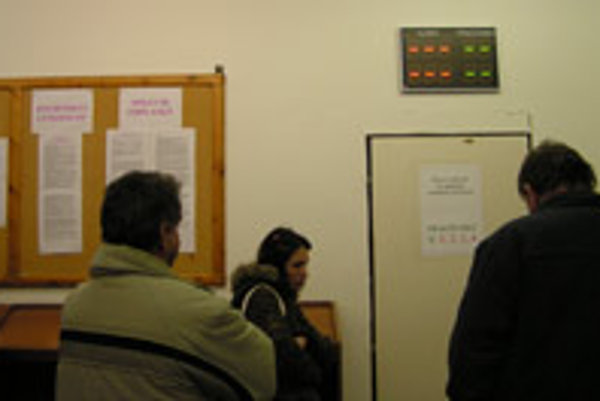 FOREIGNERS who decide to stay in Slovakia for more than 90 days face an initial ordeal. At the Office of the Border and Foreign Police in Bratislava, where applications for temporary or permanent residence are handled, their patience is tried in the small office by a long wait for their turn.

"Go there and film it on camera," one of the readers of The Slovak Spectator asked. And he was right: there is a lot of interesting material to be filmed. In a relatively small square hall, people from around the world wait for the doors to open.

One door is meant for citizens of non-EU countries, the other for EU passport-holders. On the wall, there is a notice-board displaying detailed information: about the office hours of the Foreign Police; about which fee stamps should be affixed to the application; there is even a request that applicants who are less than completely satisfied with the way employees deal with them file a complaint. However, all the information is in Slovak.

"We are here to renew our temporary residence," says a Chinese woman, Li, who is studying Czech in Prague. She speaks Czech fluently, without any accent. She waits with her parents, who trade clothes in Bratislava. "We were here last week. We weren't successful, as there were 30-40 people in the queue before us when we left," Li describes, adding: "We were late, [arriving] only at about seven in the morning."

This time, they came at six, although the office opens at half past seven. They got a ticket with the number 41; so again, there were 40 people in the queue ahead of them. But this time they believed they would make it: by half past eleven, only two people apart from them remained.

Li admitted that the lengthy wait had made them nervous. She refused to let us take a picture; nor she did hide her fear of being photographed. She went on to explain that her parents have lived in Slovakia for seven years, and that she has lived for ten years in Prague. Every year, her parents must ask for an extension to their residence permit. "Before, the fee stamp for the application cost a thousand crowns and it was settled within an hour. There used to be about four people here," Li told The Slovak Spectator.

"Now, the fee stamp cost more than four thousand crowns, and we wait here for long hours," she added.

Stefan, an American, confirmed to The Slovak Spectator that arranging things at the Office of the Border and Foreign Police has recently become more complicated.

"When I used to go to the former office at Záhradnícka Street, it was OK," Stefan said. "Since it has moved to Hrobákova Street, I have to allow one whole day for having my matters arranged."

Katrin from Switzerland married a Slovak a year ago, and so needed to apply for an identity card at the Office. "I want to have permanent residence here," Katrin explained, "but [at this office] things go slowly, you can spend a whole day here."

Simon from the Netherlands moved to Slovakia on February 1 this year, after the international company he works for opened a new branch in Bratislava. He also asked for the permanent residence. A Slovak colleague accompanied him, to help him communicate with the Slovak officials. "I filed the application last month: I hope it has been decided on," Simon told The Slovak Spectator.

Simon came shortly after eleven and didn't seem to be expecting to wait for long. His smart clothes and confident manner differed from the others who had waited wearily in the hall since six in the morning.

Nina from Bulgaria came to Slovakia with her friend, who is also Bulgarian and had got a job with IBM. She also plans to ask for permanent residence in Slovakia and get a job here. "For now, I don't know whether I will succeed," she said. "I have had several interviews, and now I am waiting for the results."

The number of applications being processed has increased recently. In 2006 12,631 people asked for residence; last year almost three thousand more applied, pushing the total up to 15,142.

Ľudmila Staňová from the Communication Department of the Interior Minister's Office confirmed to The Slovak Spectator that the ministry was aware of the long waiting times and other complications in Hrobákova Street. Currently, 44 officers work at the department according to Staňová, and 10 more should be employed in the future.

"We have prepared training on use of verbal communication and assertiveness. We are also going to make sure that the ten new employees can speak at least one world language," Staňová stressed to The Slovak Spectator.

Moreover, the ministry is planning to redesign the Hrobákova Street office., increasing the number of interview booths to at least 10. The ministry is also analysing the complaints it has received. Staňová told The Slovak Spectator that the ministry has evaluated them and is incorporating the findings, and relevant suggestions by complainants, into the office re-design.