FREE computers for deprived children; taxes waived for low-income citizens; free universal pre-schooling; improved access to the Slovak education system for students from Belarus, Ukraine and Moldova to ease pressure on the labour market. Some or all of this may come to pass if the Fico government's new grand plan succeeds. 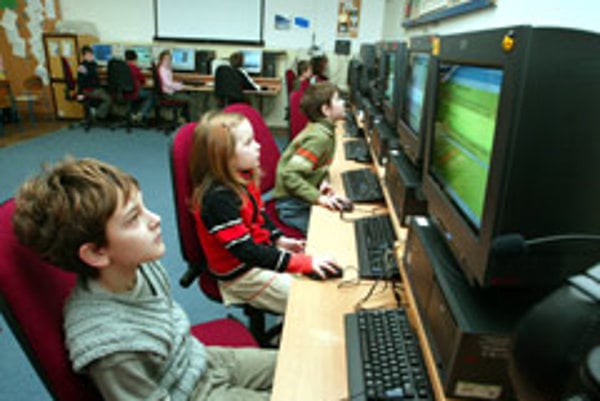 FREE computers for deprived children; taxes waived for low-income citizens; free universal pre-schooling; improved access to the Slovak education system for students from Belarus, Ukraine and Moldova to ease pressure on the labour market. Some or all of this may come to pass if the Fico government's new grand plan succeeds.

The plan, entitled 'Modernisation Programme Slovakia 21', aspires to get the country into shape for adoption of the euro and ready it for the post-adoption era. State officials are confident that Slovakia 21 is a realistic plan which will not over-burden the state coffers. While analysts agree that its objectives are progressive and well-intentioned, they doubt its timing and feasibility.

The document, which originated with the Ministry of Finance and Deputy Prime Minister for Knowledge-based Economy and Minorities Dušan Čaplovič, is intended to create conditions for sustainable development, increase social mobility and access to education for low-income families, and increase employment opportunities for the long-term unemployed. The state also plans to improve the business environment and support small and medium-sized businesses, according to the official document published by the ministry.

Miroslav Šmál, spokesman for the Finance Ministry, told The Slovak Spectator that Slovakia 21 is designed to produce good public policies.

Socially-vulnerable families would get state support to finance the education of their children, while the plan also floats the idea of compulsory, free pre-schooling. Students from nearby non-EU member countries such as Ukraine and Belarus might get easier access to Slovak universities in order to ease the impact of the country's greying population. Slovakia hopes to attract highly-qualified foreign immigrants, the document reads.

The state also wants to boost citizens' mobility by reducing their dependence on ownership of houses or apartments. The state would thus support the construction of rental houses rather than supporting the housing plans of individuals, according to the plan.

The lack of a programme like Slovakia 21, which involves five ministries, might increase the risks inherent in Slovakia's eurozone membership, and influence the country's readiness to adopt the euro in 2009, said Šmál.

While observers have questioned the programme's potential impact on public finances, the finance ministry says costs will be closely monitored and adjusted to the funds available.

"The programme primarily focuses on changing the environment rather than changing the volume of transfers from the public budget," Šmál told The Slovak Spectator.

Points identified in the programme should become a priority for departments when they draft their budgets for next year budgets, and also when drawing EU funds, Šmál said.

Once the cabinet approves it, ministries will start working on the short-term objectives encompasses by the programme and start applying them by the end of the year. But while the Finance Ministry already has a timetable for the plan, observers have some doubts about its feasibility.

"It is a progressive programme, but not a realistic one," Eugen Jurzyca, Director of the Institute for Economic and Social Reforms (INEKO), told The Slovak Spectator. "Putting the programme into practice would require very professional management of reforms, but most importantly the will to reform resolutely, which is an absent commodity worldwide."

For Jurzyca's colleague Peter Goliáš of INEKO the objectives of the plan, which he considers correct, seem to be at odds with the policies that the government has implemented so far.

Goliáš in particular pointed to plans to make more effective use of public funds while limiting cronyism and corruption.

"The document says that the government would increase the transparency of public procurement, but the policies the government has been pursuing so far do not indicate anything of the sort," Goliáš said. "On the contrary, scandals with overpriced tenders tend to be revealed by the media rather than by any internal system of control."

As for the government's plans to apply employee bonuses or the so-called negative tax for the socially vulnerable Jurzyca said that in principle it is good to try out these tools but it all depends on how they are managed in practice.

"There are risks inherent in making the tax system more complicated," Jurzyca told The Slovak Spectator.

He also said that in the globalised world the greatest demand is not for poorly-qualified employees but rather for highly-qualified ones, and by giving advantages to the former you run the risk of alienating the latter.

Radovan Ďurana of the Institute of Economic and Social Studies (INESS) said that rather than opting for negative tax, levies should be modified in such a way that they do not deform the market for low-income and less-qualified labour.

However, Ďurana told The Slovak Spectator, the measures do not sufficiently focus on cutting ineffective expenditure by the public administration, which would allow further easing of the payroll tax burden and provide important stimuli for economic growth.

"Despite the proclaimed decentralisation, the document does not propose fundamental steps in this area," Ďurana said.

However, for Ďurana the most important aspect is that the plan promises not to boost public spending.

"Insofar as the measures do not fundamentally intervene in Slovakia's public spending, they should be do-able," Ďurana told The Slovak Spectator.

Analysts however say that some of the proposals, while well-meaning, might be arriving a little late.

Slovakia 21 suggests that the government will produce a method for evaluating public private partnership (PPP) projects in comparison with traditional ways of procurement. Goliáš said that such a method should have been established earlier.

"In reality the government has launched huge PPP projects without evaluating their effectiveness," Goliáš told The Slovak Spectator. "After the contracts are signed with the winners of these tenders no method will increase their effectiveness."

The programme proposes changes to areas that have just recently been reviewed, for example the education law or an amendment to the law on employment services," said Ďurana. "In this sense, some of the measures are coming a little late. However, it is never too late for increasing the effectiveness of the public administration and decreasing the bureaucratic burden."

Ďurana also pointed out that that many points of the proposal are not new at all as they had previously been discussed by the government or the non-governmental sector.

Jurzyca of INEKO concluded that the programme might, after all, be the prime minister's way of trying to attract some additional, more pro-reform oriented potential voters.

With files from Dominika Uhríková