BY THE END of this year the volume of cargo shipped through Bratislava's M. R. Štefánik airport could grow four-fold. The airport hopes that the plans of just one company will give a major boost to the air cargo business at what is Slovakia's main airport. 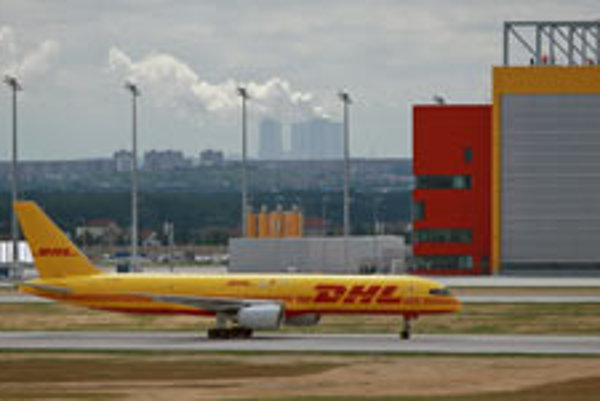 BY THE END of this year the volume of cargo shipped through Bratislava's M. R. Štefánik airport could grow four-fold. The airport hopes that the plans of just one company will give a major boost to the air cargo business at what is Slovakia's main airport.

The dominance of low-cost carriers at Bratislava airport is one reason why the air cargo business remains under-developed there. Experts see the solution in persuading some of the large cargo carriers that Bratislava airport could be a suitable home for one of their hubs. One has already been won over by Bratislava's potential.

The express transportation and logistics company DHL Express launched a regular air cargo flight between Bratislava and its new central cargo hub in Leipzig, Germany, on March 30. While back in 2007, M. R. Štefánik airport handled only 2,000 tonnes of cargo, thanks to its new cargo connection this volume should grow to 8,000 tonnes by the end of 2008.

Within DHL's logistics network, Bratislava will become a sub-hub in which the company processes all the incoming and outgoing consignments for Slovakia and three central European regions.

"We will be able to deliver consignments imported to Slovakia to customers approximately two hours earlier than before," Svitok said. "For the preparation of export consignments the clients will have an extra two hours before the departure time."

Bratislava owes the launch of the new link to its excellent geographical location, he said.

The investment costs for opening the link were about Sk20 million (€615,000), covering the modernisation of the DHL branch at the airport and purchase of new flight security equipment. DHL hired 20 new employees. The Leipzig-Bratislava cargo line will operate five days a week using a Boeing 757-200 SF aeroplane.

Dana Madunická, spokes-woman for Bratislava Airport said that air cargo transportation is a significant addition to passenger transportation at the airport, and makes it more attractive to air carriers.

The airport believes that the DHL project will give a boost to cargo transportation at the airport, which during recent years recorded a significant decline.

Between 2002 and 2003, cargo transportation grew considerably, but fell off between 2004 and 2007, said Madunická. This was due to Slovakia's entry to the European Union in 2004 and the need to meet EU legal and technical requirements such as emission and noise quotas, she said.

The absence of large freight forwarding firms, such as Danzas or Kühne&Nagel, at the airport, as well as insufficient infrastructure development, are still preventing the further enlargement of cargo business at Bratislava airport, Madunická said.

So far, aside from DHL Express Slovakia, Bratislava has no regular air cargo carriers. Other cargo moving through the airport is transported via regular passenger flights operated by Lufthansa, SkyEurope, and ČSA.

"We believe that by signing a contract with DHL a new era of cargo development has begun at Bratislava airport," Madunická told The Slovak Spectator.

According to her, the airport has not recorded any potential disadvantages from cargo transportation since the planes used by DHL do not differ from regular passenger planes, most importantly in their noise levels.

Madunická said it is difficult to specify the ideal ratio between the passenger and cargo transport but considering the current capacity of the airport and the number of passengers, 20,000 tonnes of cargo each year would be adequate.

"Naturally, the airport is interested in increasing cargo transportation - but not at the expense of passenger transportation," Madunická said. "There are ongoing talks with cargo transporters."
Antonín Kazda, head of the air transportation school of Žilina University, said that airports such as Bratislava, where there is a larger share of low-cost carriers, do not have sufficient capacity to offer cargo services. Low-cost airlines, which need to minimise turn-around times at the airport, are not interested in transporting cargo.

Moreover, now that Slovakia is part of the Schengen area most European countries can be served by road within 24 hours. Air cargo volumes within Europe in general are therefore relatively small, Kazda said. For air cargo transporters, overseas services are therefore the most attractive, but these are non-existent at Bratislava airport.

Kazda added that there is a market for special freight, i.e. the transportation of cargo according to individual specifications, for example heavy machinery, etc. However, this type of transportation requires a detailed knowledge of the market and the ability of an airport to offer such transporters not only good infrastructure but also a good price, Kazda said, adding that Slovakia has not yet has learned how to do this.

"It is not an easy business," Kazda said. "Prague Airport can serve as an example: 12 years ago they developed a large cargo terminal but its capacity is still not being fully utilised. Most of these cargo companies prefer large airports. For example, in Great Britain 80 percent of all air cargo goes through Heathrow."

As for the DHL Express project, Kazda said that it is an opportunity for Bratislava Airport. This kind of parcel company collects consignments during the day and distributes them overnight. DHL previously had its European hub in Brussels, but due to local concerns and protests against night flights, the company moved its operations to Leipzig, which had free capacity.

If any similar companies were to seek a central hub it would be a great opportunity for Bratislava airport, which should not be missed, Kazda said. But he added that he has not recently heard of any company which is considering a project similar to the Leipzig hub.