THE SLOGAN "E koruna pes cerinel pro euro," which in the Roma language means 'the crown is changing to the euro,' should now be heard frequently in the remote settlements around Slovakia where about 160,000 Roma live. 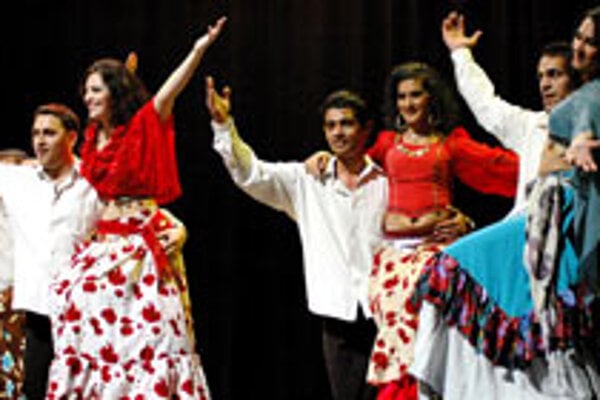 The Romathan theatre will be involved in the campaign to erase some of the euro-myths among Roma who have limited access to information and require a special approach during the country's switch to the euro. (Source: SITA)
Font size:A-|A+

THE SLOGAN "E koruna pes cerinel pro euro," which in the Roma language means 'the crown is changing to the euro,' should now be heard frequently in the remote settlements around Slovakia where about 160,000 Roma live.

Since the European Commission recommended on May 7 that Slovakia be admitted the eurozone in January 2009, the country has been intensifying its campaign to explain to citizens the process for the euro-switch and the changes it will bring to their lives.

Roma are among the communities who require a specially-tailored campaign to erase some euro-myths currently circulating - including one that each Slovak crown will be converted to 30 euros once Slovakia is in the zone. The campaign will also have to ease some euro-related fears and what campaign professionals say is a danger of mass hysteria.

The National Bank of Slovakia, which has been performing a key role during the home stretch to adoption of the joint European currency, said that euro-related information must reach every citizen - even people who for any reason have difficulty accessing it.

"These are groups that live in isolation, or are low-income groups among society," Jana Kováčová, spokeswoman for the National Bank of Slovakia, told The Slovak Spectator. "One of these special groups, which the information campaign will target, is the Roma who live in isolated villages."
Director of the Roma Press Agency, Kristína Magdolenová, said that the campaign does not target the whole Roma community.

"It concerns only the Roma who live in isolated villages; whose mother tongue is Roma and who have a minimal ability to understand the explanation in Slovak," Magdolenová told The Slovak Spectator.
More than 160,000 Roma live in about 620 isolated settlements in Slovakia, often without basic infrastructure, roads, electricity and tap water. The vast majority of Roma of an economically productive age are unemployed and have limited education, according to Kováčová.

"They are the people who need special attention, not only as a minority but also as a group living in social exclusion," Kováčová told The Slovak Spectator.

The Roma community also needs to get euro-related information much sooner than the rest of the public, and special information channels need to be used. The information should be educational and presented in an attractive form, said Kováčová.

Some of the euro-messages will have a unique character: for example stressing that when converting the crown to the euro the sum must be divided by the conversion rate, instead of multiplied, according to the NBS.

According to Kováčová, some messages targeting Roma will have to be stressed more effectively than in campaigns for the wider public: for example that euro coins have a relatively high value, since Slovak coins are often ignored, due to their lower value.

The special tools will include performances by the Romathan Theatre - a group of Roma artists - CDs and DVDs, along with training for teachers and field workers who are in close contact with Roma communities.

The involvement of Roma artists and activists should overcome any mistrust in the community, said the organisers.

"Since we started cooperating with the Roma community - be it through the Roma Press Agency, Roma theatre or through Roma interpreters - we have not yet encountered any mistrust from Roma," Kováčová said.

Magdolenová does not expect mistrust from the Roma community towards the campaign either.

She said that though the number - about 160,000 people - who need this kind of special approach does not seem at first sight very high, the community is vulnerable to mass psychosis.
"The goal is to eliminate the threat of unrest similar to that in 2004," Magdolenová said.
Magdolenová was referring to protest rallies, shop-looting and unrest, mainly in the east of the country, which were a response to what Roma described as the unbearable social situation which resulted from cuts in social benefits in early 2004. On one day alone, in February 2004, police arrested more than 100 Roma, and dozens more were apprehended during outbreaks of unrest.
"In order to avoid such situations, there is a carefully-planned campaign, which will focus on this part of the community," Magdolenová said.

According to Magdolenová, a lot of the planned activities will focus on women, since they do most of the shopping in the communities and must learn how to use the new currency.

A sub-committee has been set up within the office of the cabinet appointee for the Roma community. Organisations from all around Slovakia have representatives on the committee, which has proposed activities based on its knowledge of the target group.

"The NBS negotiated with the organisations and, based on the financial requirements for various projects, signed contracts through tenders or direct orders," said Magdolenová.

The Roma Press Agency will prepare special reports for the Roma national magazine programme broadcast by Slovak Television, the public service broadcaster. The reports will be further distributed on DVD, as part of a special programme in cooperation with field workers.

The agency also runs a chart of the best songs about the euro by local Roma bands and also a show for women during which they will learn to work with the euro.