WITH still lifes and landscapes apparently out of fashion, artists have started looking elsewhere for inspiration. 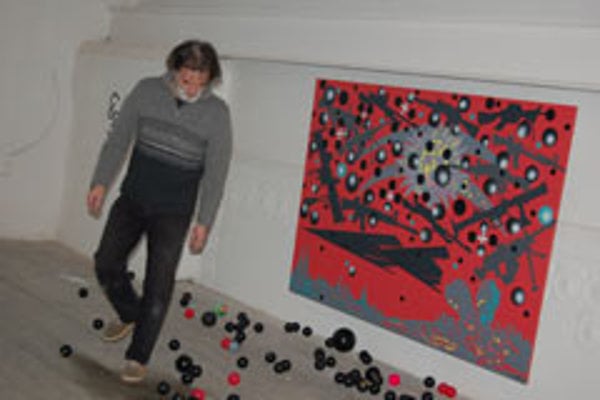 Milan Hnat is one of the artists whose work is presented at the festival. (Source: Courtesy of Tatranská Galéria)
Font size:A-|A+

WITH still lifes and landscapes apparently out of fashion, artists have started looking elsewhere for inspiration.

The Plays with Art festival, now in its thirteenth year, sets the focus on waste, both physical and mental. The main project of this three-month event, which includes workshops, lectures and accompanying exhibitions, is titled Junk (Young) Art.

"We have been preparing this project in cooperation with the Department of Fine Arts of the Matej Bel University in Banská Bystrica for more than two years," said Anna Ondrušeková, manager of the Tatranská Galéria (Tatras Gallery) in Poprad.

A number of Slovak, Polish and Hungarian student artists were invited to take part in the event. Their task was to create a physical representation of material and mental waste in today's society.
"The main aim of our project is to help both visitors and artists acquire a broader definition of waste," Ondrušeková told The Slovak Spectator. "Approaching this issue creatively enables them to understand all its aspects."

Visitors have until August 31 to view dozens of exhibits that deal with "junk" in its various forms. Part of the festival's broadness means that works by professional artists - such as Štefan Balázs, Miroslav Brooš, Milan Hnat or Canadian artist Thomas Lax - sit side by side with pieces by students from university age down to elementary school.

The accompanying workshops are titled Fallen off the Mind, Under the Spotlight, History or Waste, Photographiad and Junk Street Art.

There will also be an international conference titled Context of Waste on June 23.

"The aim of the conference is to go over the issues of social, historical, communicative and ideological waste as seen from the artistic point of view," Ondrušeková told The Slovak Spectator. "We will also discuss using waste as an object of different artistic strategies in terms of themes, motifs, genres, forms and materials."

All the festival's events take place at a former power station now listed as a historical monument, which has been managed by the Tatras Gallery in Poprad since 1993.

"This location is practically predestined for such events," Ondrušeková said. "After extensive renovation, it has become a perfect exhibition space. As many as 650 artists from 23 countries have already been inspired by its spirit, which is ensured by large windows and spacious industrial halls that provide an extraordinary contrast to the exhibited art."

Ondrušeková added that the uniqueness of the Plays with Art festival has made it very popular with participants and visitors.

"It is one of just a few opportunities for undergraduates to present their works in public," she observed. "Therefore, their teachers are also happy with it, because they are pleased to see their students so active."

Miroslav Brooš, one of exhibiting artists and professor at Matej Bel's Department of Fine Arts, agrees with Ondrušeková that the Plays with Art festival serves a vital role in the educational process.

"It is a great chance for young people to experience the cultural dialogue that accompanies every artistic creation," he told The Slovak Spectator. "This influences students' perceptions of the creative process and has a beneficial impact on the future development of their skills, including, for example, the use of different techniques."

Brooš pointed out that probably the most important aspect of similar exhibitions is the artistic and educational cooperation among individual artists, as well as the way they influence each other.
"Not only do they often have to reconsider their creative decisions, but they can compare their works with those of their colleagues, which enriches them immensely," Brooš said.

He also expressed his belief that the choice of this year's topic was very suitable because waste in both its literal and metaphorical meaning is a pressing societal issue.

"Authorities often fail to solve numerous problems related to 'junk'," Brooš remarked. "The Plays with Art festival, and more specifically this year's Junk (Young) Art project, is a noteworthy attempt to raise public awareness. At whom if not the young should we aim these efforts?"