Fees for some, free for others

UNIVERSITY diplomas may become more expensive for part-time students from the new academic year (2008/2009). Parliament revised the University Act in July 2007 to allow public universities to collect tuition fees for some courses. 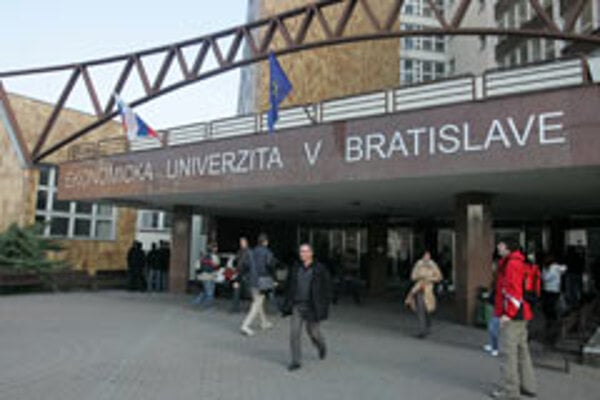 UNIVERSITY diplomas may become more expensive for part-time students from the new academic year (2008/2009). Parliament revised the University Act in July 2007 to allow public universities to collect tuition fees for some courses.

Public universities have welcomed the move and see the option to charge fees as a way to make study programmes more competitive.

“Of course, fees and quality will differ across Slovakia, but students will have the right to pick what suits them best,” Ivana Cimermanová, vice-chancellor for education at the University of Prešov, told The Slovak Spectator. “It is a question of strategy for faculties and universities, to decide for which study programmes they will introduce fees and which they will offer free of charge.”

Michal Pokorný, the vice-chancellor for education at the University of Žilina, said that his school is positive about the introduction of fees.

“We have been in favour of introducing this model of fees from the very beginning of the discussion about it,” Pokorný told The Slovak Spectator.

Pokorný hopes that fees will encourage students to adopt a more responsible attitude towards their studies.

Renáta Králiková, of the non-profit Slovak Governance Institute, said that the introduction of tuition fees for part-time students is not something new, but instead makes legal something what is already being done. Some schools have previously asked part-time students to make payments or donations to third parties, in effect paying for the courses but not technically violating the letter of the law. However, Králiková considers this latest step “unsystematic”.

“The government is introducing tuition fees for only one group of students,” Králiková told The Slovak Spectator. “The new legislation deforms the system, limits the number of part-time students and goes against the world trend of making university study more flexible.”

The introduction of tuition fees for all university students would have been a better solution since it would have made the system more transparent, she said, adding that it would enable the state to create a system to support students who need assistance.

According to Králiková, the public perceives the issue of tuition fees for part-time students as marginal.

“But I think that when this touches upon one third of all university students, it’s certainly not just a little group.”

Of 195,000 students attending study programmes in this academic year, over 62,000 are part-time, the ČTK newswire reported.

The opposition has been critical of the current system and in November 2007 it launched a challenge to the revision in the Constitutional Court, arguing that it will divide students into two categories. Opposition deputies said that students would not enjoy equal opportunity in education. The court has not yet decided on the issue.

Universities have to publish the fees they will charge for each course in the next academic year by October 31. Before this date, the Education Ministry sets caps on the fees for individual study programmes.

“Prešov University is offering 10 bachelor study programmes and eight masters programmes for part-time students free of charge in the 2008/2009 academic year,” Cimermanová told The Slovak Spectator. “We will charge for 19 first degree study programmes, and 11 second degree courses.”
According to the university’s website, annual fees range from Sk10,000 up to Sk46,000. The University of Žilina is offering, for the next academic year, 45 free study programmes for part-time students and seven paid programmes in bachelor and masters studies, said Pokorný. The fees there are between Sk12,000 and Sk18,000, according to the university’s website. That puts them within the bottom third of the limits set by the Education Ministry.

In calculating maximum tuition fees, the ministry did not consider the amount of interest in individual study programmes, just the financial cost of providing the programme. For example, the ministry has capped tuition fees to study law at Sk29,000, which is the lowest maximum among the figures released by the ministry. The highest possible fees are in veterinary science, cynology and food hygiene, for example, which are set at Sk150,000 per academic year, according to the Hospodárske Noviny financial daily.

Universities set fees based on the popularity of individual programmes as well as study costs. Based on a survey by Hospodárske Noviny, the maximum fee that universities are charging is Sk46,000.
Not all of the 20 public universities in Slovakia are making use of the opportunity to collect fees from part-time students.

For example, part-time students at the Technical University in Zvolen, or the University of Economics in Bratislava, will continue to study free of charge.

Ľubomír Scheer, the vice-chancellor of Zvolen University, told the Sme daily that introducing tuition fees for part-time students made little sense since the caps on his university’s study programmes for 2008/2009 mean the fees are barely worth collecting.