Not your average bureaucrat

ON HIS RECENT inspection of the Defence Ministry, Prime Minister Robert Fico issued an unusually frank public warning to senior ministry bureaucrats: Any more scandals, and you can pack your bags.Fico, who at the beginning of June began visiting members of his cabinet and then delivering verbal 'report cards' on their performance so far, was addressing journalists on June 9 after meeting with new Defence Minister Jaroslav Baška. Baška's predecessor, František Kašický, was forced to resign earlier this year after agreeing to pay a grossly inflated Sk4 billion bill for cleaning and snow removal services. 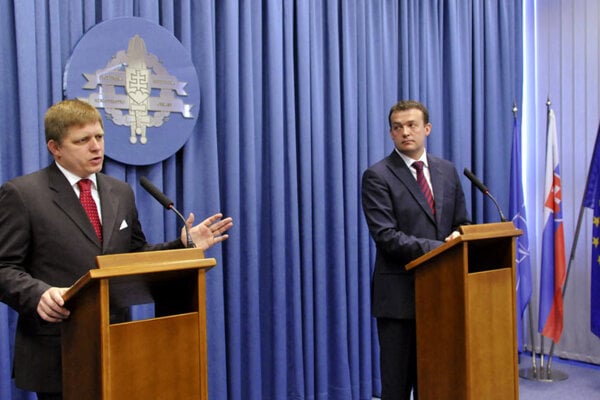 ON HIS RECENT inspection of the Defence Ministry, Prime Minister Robert Fico issued an unusually frank public warning to senior ministry bureaucrats: Any more scandals, and you can pack your bags.
Fico, who at the beginning of June began visiting members of his cabinet and then delivering verbal 'report cards' on their performance so far, was addressing journalists on June 9 after meeting with new Defence Minister Jaroslav Baška. Baška's predecessor, František Kašický, was forced to resign earlier this year after agreeing to pay a grossly inflated Sk4 billion bill for cleaning and snow removal services.

"If we see anything similar to the events for which Defence Minister František Kašický was forced to leave, the consequences for ministry personnel will be far deeper and will affect more people than just the minister," Fico said.

Insiders believe the intended audience of Fico's cryptic message was the ministry's most powerful bureaucrat, head of office Miroslav Sim, who has responsibility for public procurement. Sim somehow managed to survive the scandal that toppled Kašický, even though many regard the former minister as a scapegoat for the sins of his former subordinate. According to the Pravda daily, Sim was nominated to his post by current Interior Minister Robert Kaliňák.

"This was intended as a warning for the acquaintances and nominees of the Interior Minister," said former Defence Minister Martin Fedor.

Miroslav Sim came to his new job from the east of Slovakia, a village named Hutka in Bardejov district. In Bardejov, as a member of the Kombat Klub Kondor (KKK) sport shooting club, he was brought together with Miroslav Kopčík, the current first vice-president of the police corps and Kaliňák's point man on the fight against organised crime.

Sim and Kopčík in 2001 were members of a KKK team that finished second in the 'modified' category at the 2001 International Shooting Championships in Barry, Illinois.

According to ministry sources, Kaliňák spent some of his childhood in eastern Slovakia, where he moved in the same social circles as Sim and Kopčík. The same sources also said that Kaliňák had used the KKK shooting range for target practice. However, ministry spokesman Erik Tomáš refused to respond to questions about the relationship between the men.

"Given that these questions arose from untrue and misleading anonymous information from policemen who are angry at having been recently fired from the Anti-Organised Crime Unit, we see no reason to answer them," Tomáš wrote, without explaining or substantiating his claims.

KKK has since moved to Prešov and is now under new management. Ján Pohlod of the club said that neither Kopčík, Sim nor Kaliňák currently used its facilities.

Another member of the KKK team, Ján Rusin of Bardejov, ran a weapons business called ORFA in Bardejov from 1999 to 2004 at the same address as the KKK shooting range. ORFA's official representative with responsibilities for repairing and decommissioning weapons, and transporting weapons and ammunition was Miroslav Sim.

In 2002, a powerful arms industry figure named Jozef Mihok also joined the company as a statutory representative. Mihok is currently head of strategy at the Economy Ministry, and head of the Defence Industry Association. He and Sim both sit on the boards of DMD Group, an arms industry umbrella organisation where Ľubomír Gažák, the head of counterintelligence with the Slovak Information Service (SIS) also served from 1999 to 2002.

Sim refused to answer questions regarding his personal ties and business activities. "In light of current Slovak law, we regard the content of some questions as inappropriate given the current standing of the head of the service office, his powers and his exercise of them," wrote Defence Ministry spokesman Vladimír Gemela.

Since Sim joined the Defence Ministry, firms that he used to own, or that are in some way connected to him, have picked up lucrative state contracts.

EHC Service, a company that Sim used to co-own before he took up his ministry post in 2006, won a Sk20 million Interior Ministry contract under the Fico government to rent helicopters to the police to monitor the country's eastern border with Ukraine. The firm is now bidding on a further Sk90 million contract to take it to the year 2010.

"The illogical nature of these various constructions is shown by the case of Peter Korba, who divorced with the sister of Mr Sim in 2005, and therefore is not his brother-in-law, so Mr Sim has no reason to take any interest in him or make any statements about him," Gemela wrote.

However, another firm owned by Korba, Heli Company, recently won a Defence Ministry tender to give flying lessons to Slovak pilots. The contract is worth Sk5 million a year, or Sk20 million over four years.

Peter Korba's brother, Miroslav, is the head of the Prešov air base, where all of the chopper pilots that Heli Company will instruct are based.

EHC also won a Sk110 million contract from the SEPS nstional electricity transmission network operator for inspecting power lines from the air. Under the agreement signed by the parties of the ruling coalition, like the defense and interior ministries, SEPS 'belongs' to Robert Kaliňák's Smer party.

"It is clear to us that [your] misleading construction of various connections is merely a deliberate attempt to besmirch the name of Mr Sim," wrote Gemela.