Devín being squeezed by developers

“DO YOU like the Viladomy Devín residential neighborhood?” This provocative question was posed by the Swedish real estate developer Skanska, which as chance would have it is the developer behind the residential neighborhood in question. It confronts everyone who picks up the company’s PR pamphlet to read about “comfortable living on the slopes of vineyards” within sight of the Devín Castle, one of Slovakia’s most important monuments. 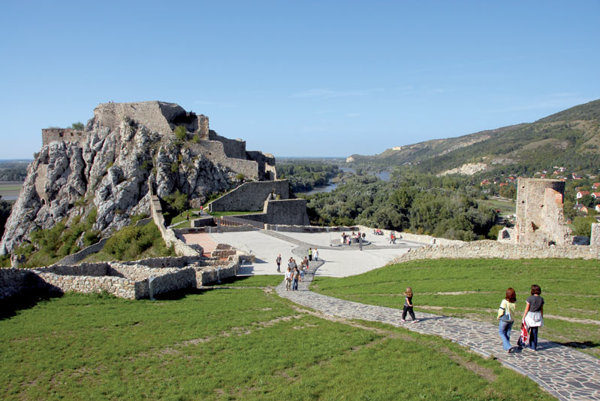 “DO YOU like the Viladomy Devín residential neighborhood?” This provocative question was posed by the Swedish real estate developer Skanska, which as chance would have it is the developer behind the residential neighborhood in question. It confronts everyone who picks up the company’s PR pamphlet to read about “comfortable living on the slopes of vineyards” within sight of the Devín Castle, one of Slovakia’s most important monuments.

Ground has not yet been broken on the new project, but Skanska already has all the necessary permits to go ahead. The new development would add two dozen housing tenements, providing living for about 1,200 people.

For Devín, a village of 1,000 inhabitants, the project means the end of a comfortable existence. To preserve the village’s unique character, Mayor Ľubica Kolková has been leading a civic revolt against Skanska’s plans, including a petition and a ceremony planned for the end of June in which Devín will be symbolically buried.

“This would totally destroy Devín because it would double the number of inhabitants, and we’re just not prepared for it,” she said in an interview with SPEX.

During the Great Moravian Empire (770-960), Devín was one of the most important defenses against the expansionist Frankish Kingdom, and was a major trade center as well. After the overthrow of the Great Moravian Empire, the area lost its significance, but recaptured it during the Austro-Hungarian struggles of the 13th century and the Turkish raids of the 1500s and 1600s. Thereafter began its slow decline, which was accelerated when Napoleon’s soldiers blew the upper castle to smithereens in 1809. Devín remains a symbol of the first Slavic kingdom in the area, and since 1961 has been a national cultural monument.

Devín Castle (Tel: 02 6573-0105, open from April to October, Tues-Fri 10:00 to 17:00, Sat-Sun 11:00 to 18:00) remains a great destination for a day trip from Bratislava. In August it hosts a Castle Games festival within the Bratislava Summer of Culture (see www.devin.sk for details), which offers plays, dances, mock sword-fights and battles as well as crafts and plenty of beer. At any time, the view from the top of the castle, which sits at the confluence of the Danube and Morava rivers, is worth the steep climb to the ramparts.

But one of the most charming things about Devín is the perfect balance between the castle and the size of the town. Devín is far from a theme town, and has a vibrant life of its own that is independent of the castle. At the same time, it is small enough that the history of the area is not overshadowed by industry or traffic.

The best way to enjoy Devín is on foot. A promenade that snakes under the castle walls takes you from one end of the village to the other, past innumerable refreshment stands and restaurants. Another route, primarily a bike path, winds along the banks of the Morava River away from the Danube into Slovakia’s Záhorie region. After a few kilometers of chirping frogs and river smells you come to a protected area and a series of 16 information tables in three languages. These tell you that you are in the Morava bog ecosystem, which is unique in Central Europe for the diversity of its plant life, river life (62 species of fish) and bird life (176 species have been spotted here, earning the area a significant bird habitat designation from Bird Life International). But beyond the statistics, the “educational path” as it is called simply makes for a beautiful walk, run, bike ride or roller skate. The path is paved and smooth and extends for 21 kilometers, ending in Vysoká pri Morave.

Devín lies on a two-lane road from Bratislava to Devinská Nová Ves. On the other side of the highway from the Castle is the gorgeous Devinská Kobyla nature reserve, with its sand deposits and fascinating limestone formations.

It is amidst all of this natural wealth that Skanska intends to build its Viladomy, which are low-rise apartment buildings totally out of character with the town’s traditional architecture. However, Mayor Kolková fears for more than just the area’s environment – she believes the new project will make life miserable for existing inhabitants by taxing an infrastructure that is not prepared for the newcomers.

“The problem is that Skanská hasn’t proposed any new services,” she said. “There is no supermarket here, and there is only one nursery school, which is already completely full. If the village doubles in size there will also be terrible traffic problem, because the only connection with Bratislava is a two-lane highway.”

But more than overtaxed services, Kolková fears losing a laid-back and intimate way of life that has changed little in Devín for hundreds of years.

“If that development goes ahead, this place will never be the same.” n