IN A SURPRISE move, President Ivan Gašparovič on July 25 vetoed the new Traffic Code, whose main provisions raised fines for speeding and lowered speed limits on roads and highways. 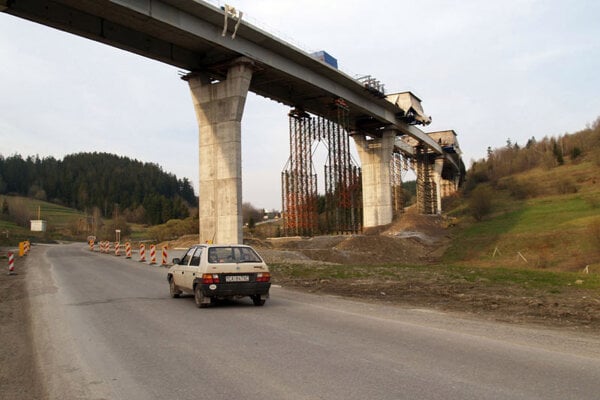 IN A SURPRISE move, President Ivan Gašparovič on July 25 vetoed the new Traffic Code, whose main provisions raised fines for speeding and lowered speed limits on roads and highways.

The president’s spokesman attributed the veto to an amendment by Smer MP Peter Pelegrini that expanded the government’s right to expropriate private land for highway construction.

Gašparovič considered the amendment unconstitutional because its unexpected attachment to the act deprived opponents of the opportunity to argue against it, and because its subject matter was unrelated to the main provisions of the Traffic Code.

Some NGOs have expressed disappointment that the veto was issued on technical grounds, rather than a principled stand against expropriation, while other lawyers have said they expect it to be easily overridden.

The events leading up to this point began on December 11, 2007, when parliament passed a set of one-time special measures meant to speed up the construction of highways and roads across the country.

Gašparovič signed the measures on December 31, 2007.

Several months later, on July 3, parliament passed the Traffic Code, which raises the ceiling on fines for speeding up to Sk40,000; requires that headlights be kept on year round; lowers the speed limit to 50 kilometres an hour in towns and villages and 80 kilometres per hour on country roads; and bans summer tyres on snowy roads.

But attached to the Traffic Code was Pelegrini’s amendment, which increased the amount of land that the state had the right to expropriate under the terms of the measures passed in December.
Presidential spokesman Marek Trubač told The Slovak Spectator that Gašparovič believes that it was unconstitutional to slip an amendment about highway construction into a law on road rules.
“Therefore, the president doubts that [the Traffic Code] conforms to Article One, Paragraph One of the Constitution, which states that Slovakia is a law-abiding state,” Trubač explained.
Smer MPs have expressed surprise at the president’s veto.

On July 26, Smer MP Ján Richter told the Sme daily that the construction of highways is a priority for the governing coalition.

“Because we are truly dedicated to speeding up the building of highways, we will repeatedly support this bill,” Richter said.

He acknowledged that the amendment was not on the soundest legal footing.
“It has to be looked at as an effort to expedite the construction of highways as much as possible,” he said.
But Eva Kováčechová, a lawyer with the Via Iuris civic association, believes that the governing coalition purposefully buried the amendment in the Traffic Code to avoid debate on it.
“This was a trick,” she said.

She called the special measures passed in December a gross infringement of landownership rights.

“It makes landowners second-class citizens,” Kováčechová told The Slovak Spectator. “It is unprecedented in Europe.”

She expressed regret that the president cited a technical reason for vetoing the law.
Marek Benedik, a lawyer, also believes that the veto came across as a technical move rather than a principled decision.

“I do not consider it a balancing of power, nor a fundamental objection to the law,” Benedik told The Slovak Spectator.

In the end, the president’s veto did nothing to address the fact that private property is being nationalised, which is absolutely inadmissible in a lawful state, Benedik said.
The president’s spokesman said Gašparovič had other objections to the Traffic Code. The president was not pleased that the fees for driving tests will increase because the act assigns them to private companies rather than the police. He also objected to the provisions that were vague about administrative deadlines.

If the governing coalition overrides the veto, as political analysts expect it will, the Traffic Code will still come into force in October.

The Interior Ministry, which drafted the bill, has said it expects it to become law.
The Traffice Code was passed with 80 votes, more than enough to override a veto.