IN SPITE spite of some bad luck and disappointing performances, the Slovak team managed to come away with two medals during the first six days of the XXIX Olympic Games.As The Slovak Spectator went to press, Michal Martikán had taken the gold in water slalom and shooter Zuzana Štefečeková finished second in trap shooting. 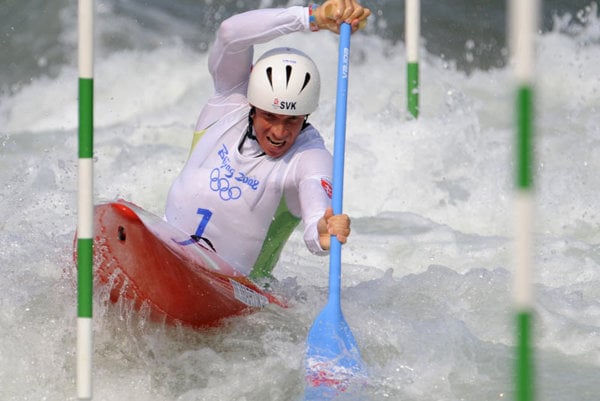 IN SPITE spite of some bad luck and disappointing performances, the Slovak team managed to come away with two medals during the first six days of the XXIX Olympic Games.As The Slovak Spectator went to press, Michal Martikán had taken the gold in water slalom and shooter Zuzana Štefečeková finished second in trap shooting.

Martikán’s victory came on August 12. It was a repeat of his first place finish in Atlanta 12 years ago. With the gold in Beijing, Martikán becomes the best Olympic canoeist of all time, with two gold and two silver medals.

“It is a fantastic feeling to win the Olympics and I’m glad that I managed to repeat it,” Martikán said after his latest triumph. “I feel excellent; I have trained for this all my life.”

Britain's David Florence won the silver medal and Robin Bell of Australia took the bronze.
Martikán won his first Olympic gold at the age of 17 in 1996, but had to settle for silver in both 2000 and 2004, losing both times to France's Tony Estanguet.

Štefečeková, from Nitra, 24, was tied for first with Satu Mäkeläo-Nummel of Finland after the qualifying round but during the competition, the Finnish shooter proved unstoppable and won with an Olympic record 91 points.

“I felt confident with four targets to go but it just didn’t happen. But I am very happy with the silver, anyway,” Štefečeková told the SITA newswire.

Before the games started, shooting was considered a Slovak strong point but aside from Štefečeková the shooting has not gone well for the Slovak athletes. Erik Varga, Mário Filipovič, Danka Barteková and Daniela Pešková all failed to advance to semi-finals or finals. Pavol Kopp, however, did finish sixth in the men's 50m free pistol (60 Shots) category, a personal best for him.

Slovakia’s most experienced shooter Jozef Gönci, for whom Beijing will be the fourth Olympics, will compete on Friday, August 15, and Sunday, August 17.

On August 14, when The Slovak Spectator went to print, the atmosphere on the Slovak team was constrained.

“Due to heavy rain the organisers postponed finals in the canoe double and semi-finals as well as finals in the kayak-single category for August 15,” Ľubomír Souček, the press attaché of the Slovak Olympic Committee, told The Slovak Spectator. “After the successes of brothers Peter and Pavol Hochschorner and Elena Kaliská in qualifications on August 13, semi-finals and finals were on the programme. But only the semi-finals in double canoe took place. The brothers finished second.”

“This complicates the lives of athletes as well as their coaches. They not only need to tune up again for another competition day, but they also have to solve organisational things as they had planned to leave Beijing on Friday,” said Souček. He added that this is an unusual situation as neither Kaliská, competing in the kayak-single category, nor the twin brothers and Martikán have ever experienced a rain postponement in water slalom competition.

Nor were the results from August 14’s competition very hopeful. “Danka Barteková did not advance to the finals in skeet,” Souček told The Slovak Spectator. “Wrestler Atilla Bátky dropped out in the first round as well as judoka Zoltán Pálkovács. And shooter Daniela Pešková ended 22nd.”

Nevertheless, there are still some medal possibilities for the Slovak team.
“As well as water slalom, we have hopes in the flat water competitions and wrestling,” Souček told The Slovak Spectator.