MORE than 750 volunteers from 30 companies aided non-profit and community organisations and groups as part of the Naša Bratislava (Our Bratislava) project. 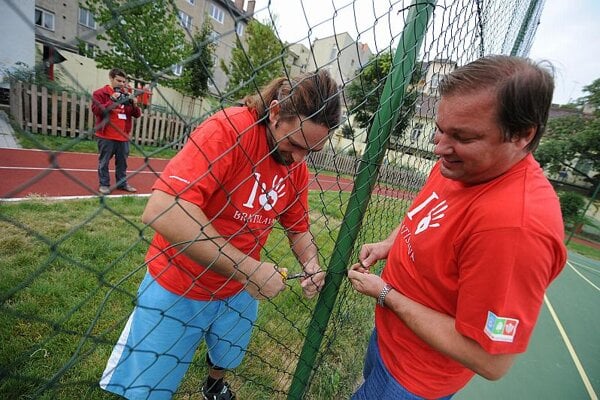 MORE than 750 volunteers from 30 companies aided non-profit and community organisations and groups as part of the Naša Bratislava (Our Bratislava) project.

On September 12 and 13 they cleaned parks, painted benches and rooms in orphanages and nursing homes, and provided expert consultancy in various fields.

“They had the opportunity to choose from among 50 different projects in the areas of social, environmental, human rights, and other concerns,” Lenka Surotchak, the director of the Pontis Foundation, co-founder and administrator of the Engage group, told The Slovak Spectator.

“The number of participants doubled, as did the number of NGOs and activities compared with 2007, the project's first year,” he observed.

The organisers took the idea for the event from abroad.

“There are similar events carried out in other cities around the world,” Surotchak said. “Probably the most famous are in New York, carried out four times a year by the organisation New York Cares. During my time living in New York, I worked as a volunteer on a number of different projects such as soup kitchens, cleaning parks and playing with kids in hospitals.”

Naša Bratislava, however, was created and conducted by a Slovak group called Engage, a partner of the British Business in the Community initiative.

Last year, its 17 key corporate members established the Slovak Engage group, which is made up of companies actively promoting and participating in corporate volunteering.

This year's volunteers included employees, CEOs and top representatives from the City of Bratislava, the US Embassy, public and private media, and companies.

“The commitment and personal contribution from CEOs who volunteer and lead by example is one of the foundations upon which employee loyalty and respect for a corporation is built,” Surotchak said.

“Seeing CEOs personally engaged says more than statements printed on beautiful paper notes and framed on the walls in boardrooms.”

The two-day project's impact can be measured in more than just painted rooms and clean parks. Doing something for the benefit of the community has an impact on the corporate sector as well, he commented.

“We have to remember that the largest amount of volunteers came from corporations," Surotchak said. "They were assigned to duties and places that were outside their usual sphere in day to day life. And by having the companies’ CEOs give the green light and having them do something for the community on the company’s paid time, they realise that it is a worthy cause."

The organisers are planning to continue the project every year and do it in other cities. This May, a similar event was held in Košice.

“We see how useful it is and how it gathers supporters and friends,” Surotchak. said

“People love their cities, towns, and communities," he added. "This gives companies a very practical way to demonstrate their corporate responsibility and corporate citizenship.”