MANY European countries are aiming to achieve full digital television coverage by 2010. In Slovakia, digital video broadcasting should fully replace the existing analogue television system no later than 2012, according to the Telecommunications Office. To meet this deadline, the office has already initiated a tender to select an operator for the first and second Digital Video Broadcasting – Terrestrial (DVB-T) multiplexes. DVB-T is an internationally accepted standard for digital television. 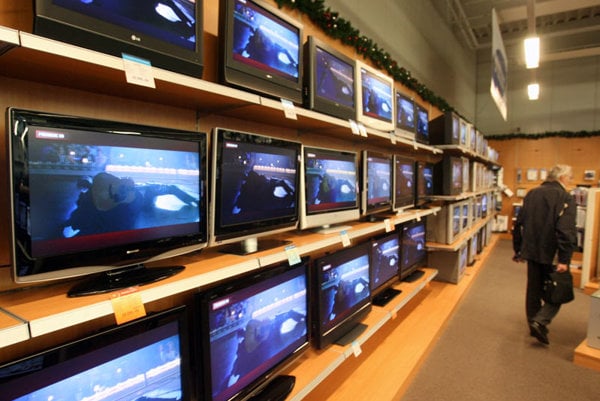 MANY European countries are aiming to achieve full digital television coverage by 2010. In Slovakia, digital video broadcasting should fully replace the existing analogue television system no later than 2012, according to the Telecommunications Office. To meet this deadline, the office has already initiated a tender to select an operator for the first and second Digital Video Broadcasting – Terrestrial (DVB-T) multiplexes. DVB-T is an internationally accepted standard for digital television.

Interested parties are invited to submit their bids by November 20, 2008 for a project which the office believes will boost competition in the Slovak media market and generate a higher standard of television programmes.

Slovak television audiences should see a substantial improvement in the visual quality of television broadcasts, with many switching to so-called studio-quality, as well as having the opportunity to interact with broadcasts, according to the Telecommunications Office.

A single winner will be chosen to operate both multiplexes. The office expects to receive bids from both Slovak and international applicants, a spokesman for the office, Roman Vavro, told The Slovak Spectator.

A five-member tender commission will decide the outcome; the length of the tender process will depend on the number of applicants.

“The winner of the tender could be published by the end of 2008,” Vavro said. “We also expect interest from international firms. Companies that provide services to TV stations in the surrounding countries know our market well and, based on media statements, their interest can be expected.”

The procurer will look at the applicant’s ability to build and launch the network of multiplexes within the deadline and ensure that it is constructed through a signal distributor.


The transparency and credibility of financing arrangements for the building or leasing of the network will also be considered, according to Vavro.

Another criterion is the support bidders propose to provide for the switchover from analogue to digital signal transmission, including obligations in relation to end-users (i.e. viewers).


The procurer will also evaluate the technical solution and speed of network construction for the multiplexes and their population coverage in Slovakia.

The scope of services and the amount offered for the allocated frequencies for the first and second digital terrestrial multiplexes are also among the evaluation criteria.

As for the challenges that the winning firm will face, Vavro said that the winner will have to meet all the conditions listed in the tender criteria, since the office will define these as the main conditions for winning the licence.

First of all, the bidder will have to construct and launch the network within set deadlines and undertake to provide a digital TV signal which covers the population, Vavro said.

He added that the winner will have to launch the first multiplex within one year after the licence comes into force, with at least 45 percent coverage.

The Telecommunications Office earlier launched a public debate over the selection of the provider of DVB-T in which providers interested in operating multiplexes, broadcasters, mobile operators, advisors and others joined in, Vavro said.

“Responses to the public debate and the experience of other countries which have already carried out tenders served as the grounds for preparation of this tender,” Vavro concluded.


Towercom has confirmed to The Slovak Spectator that it plans to participate in the digital terrestrial television broadcasting tender.

“One of the greatest challenges will be to secure in the shortest possible time the largest possible coverage of Slovakia’s territory with a digital terrestrial signal,” Jozef Motyčka, deputy chairman of the board of directors of Towercom, told The Slovak Spectator.

Motyčka said that Towercom was equipped to meet this challenge since it has experience with terrestrial analogue broadcasting and the company has been broadcasting a pilot digital video broadcasting-terrestrial (DVB-T) service for more than two years.

“Another challenge will be the negotiations with the broadcasters about the final form of multiplexes,” Motyčka said. “It will also be important to secure financing for the broadcasts and build a financial model in a way that is interesting for broadcasters and preserves the concept of free access for citizens to television broadcasts.”

Meanwhile, public-service Slovak Television (STV) said that it would present its basic strategy for switching from analogue to digital broadcasting in October 2008.

By the time of the switch planned for 2012, the public broadcaster aspires to provide four instead of the current three channels. STV suggested that the fourth channel could be a news channel, the SITA newswire wrote in August 2008.

For viewers who are currently receiving analogue television broadcasts the switch to digital would entail purchasing a television set with a built-in digital DVB-T tuner, or alternatively fitting a so-called set-top-box device to their existing TV set, the Telecommunications Office said.

The higher-quality digital terrestrial signal that is expected to replace the current analogue transmission will not reach about one fifth of Slovakia's inhabited territory. Since everyone in Slovakia is entitled by law to receive public TV broadcasts, the state, in October 2007, floated the idea of subsidies to allow those who will lose their terrestrial signal to buy satellite dishes.