Mobile data services are all the rage, say operators

MOBILE data services are experiencing a golden age in the European Union, at least according to recent surveys. 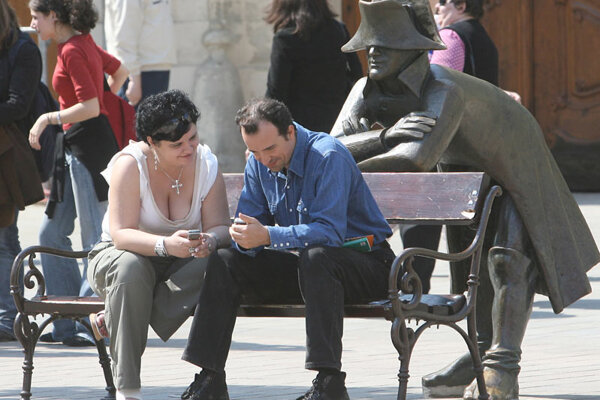 MOBILE data services are experiencing a golden age in the European Union, at least according to recent surveys.

The market for technology which enables to people to access the internet, email and other multimedia while on the move grew by 40 percent to €7 billion in 2007 as operators invested more than €20 billion in enhancing their mobile networks and services, according to a statement released in June by the GSM Association (GSMA), which represents more than 750 mobile phone operators across 218 countries and territories. In April 2008, the number of 3G users doubled in the EU to 112 million year-on-year, the GSMA said. 3G is a standard for mobile networks which allows high volumes of data to be sent and received.

According to the GSMA, many mobile operators now offer data services as part of wider packages at a flat price. This encourages customers to use them, by reducing the likelihood of unexpectedly high bills.

Mobile network operators in Slovakia have confirmed that increased interest in mobile data services is a growing trend.

Richard Fides, a spokesman for mobile operator Orange Slovensko, said customers’ interest in mobile data services has been growing each year. Customers are mostly interested in mobile internet access, something which is connected to the consistent growth in the speed of mobile data networks, he added.

“Mobile broadband speeds have long exceeded the fixed-line mainstream, which is DSL internet, and this is being reflected in the interest of customers,” Fides told The Slovak Spectator.

Andrej Gargulák, a spokesman for T-Mobile Slovensko, said that a typical T-Mobile customer now transfers 1000 MB data monthly, which is a huge number.

“We expect the interest in high-speed [data services] to grow, however the dynamics of this growth compared to 2008 will gradually slow,” Gargulák told The Slovak Spectator.

René Parák, a spokesman for Telefónica O2 Slovakia, the smallest and newest operator on the market, also confirmed that demand for mobile data services is gradually increasing, but added that most mobile operators’ clients are still primarily using voice services.

Asked why use of mobile data services is growing so fast, providers point to the fact that the internet has become an essential part of the working and private life of the majority of the population.

“Present times have taught us that almost everything can be arranged online, simply and without losing time, all thanks to the internet,” Gargulák said. “Mobility gives this phenomenon another added value, which is the possibility of meeting all these needs from any point in the world.”

According to Gargulák, prices for data roaming in 2008 have fallen considerably so the economic effect is no longer as limiting as it was.

“An important motivating factor when choosing how to connect is that mobile access is currently reaching a speed comparable to fixed-line connections and is thus enough for surfing the internet or downloading multimedia files,” Gargulák said.

Fides said that the most important motivating factors for customers are, first of all, mobility and, thanks to 3G networks, speed and stability, which has inspired a growing number of customers to opt for mobile data services.

“A huge advantage, for example of mobile 3G internet access, is the compatibility with foreign 3G networks” said Fides.

According to Parák, the main reason for customers to use mobile data services is to stay in touch with friends and family.

In some parts of Slovakia customers are opting for mobile data services because it’s the only way they can connect to the internet. Many clients are also using their mobile connection when they are away from their normal workplace.

However, mobile communication experts say that defining people’s primary reason for opting for a mobile internet connection can be difficult.

Fides confirmed that, based on Orange’s surveys, 70 percent of customers are using mobile Orange internet as their home connection, as a substitute for fixed-line internet.


“However, there are only very few locations now where the mobile Orange internet connection is the sole alternative,” Fides said.

Parák said that at present there are insufficient reliable statistics to allow analysts to give an unambiguous answer as to why customers are opting for mobile data services.

What the customer wants

“As far as the type of mobile connection is concerned, customers prefer international standards, which means a 3G network with high-speed access,” said Fides.

According to Fides, it is possible to use Orange’s data services anywhere in Slovakia, but 3G access is available to about 60 percent of the population, or about 3 million citizens in 133 towns and surrounding localities.

Gargulák said that T-Mobile’s high-speed network for mobile internet is currently accessible by 70 percent of the population and covers towns where there is no other high speed connection.


O2’s Parák said the company offers data services which fully meet the needs and demands of most O2 customers.