The hardest part is yet to come

BANKS have been preparing for Slovakia’s adoption of the euro for more than two years. Now they, as well as the National Bank of Slovakia and the government proxy for euro adoption, say that the conversion process should occur smoothly, unthreatened by major risks. 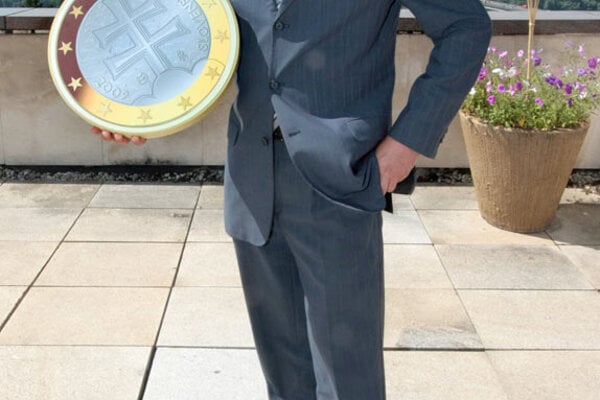 BANKS have been preparing for Slovakia’s adoption of the euro for more than two years. Now they, as well as the National Bank of Slovakia and the government proxy for euro adoption, say that the conversion process should occur smoothly, unthreatened by major risks.

Banks here started their euro preparations, and made investments to allow for the new currency, even before the decision by EU bodies to invite Slovakia to join the eurozone. Preparations then intensified after the European Commission set the official euro-crown conversion rate in July this year. After the rate was known the banks made allowance for dual-price displays. Currently, euro cash is being distributed to retail banks in cooperation with the central bank. In December, the banks will start distributing that cash to their clients.

Banks agree that the most demanding task is yet to come: the day of conversion, which begins at midnight on December 31, 2008.

“Banks have declared that they are prepared for the adoption of the euro and that they do not expect any serious problems to occur,” said Jana Kováčová, spokeswoman of the National Bank of Slovakia (NBS). “Banks have stated that their information systems have now been prepared and since this August they have also been meeting the requirement of dual-display pricing in accordance with the law.”

Currently, so-called primary frontloading of banks is taking place in cooperation with the NBS, which means euro cash is being distributed to them, said Kováčová. After primary frontloading is completed, the banks will take care of secondary frontloading. This is the distribution of cash to those among banks’ clients who will need large amounts in advance. In December 2008, banks should also begin selling starter packs of euro cash to citizens.

The banks are also continuing to provide information to their clients on the euro conversion process. Ensuring that ATM machines and payment systems continue to function is also among their duties.

“The banks have agreed that selected branches will be open on the first day of euro adoption in Slovakia, which is New Year’s Day, for at least four hours,” Kováčová added.

Each bank may find a different stage of the preparation process to be most difficult, said the NBS spokesperson. Banks, for example, took a very responsible approach when it came to estimating their requirements for euro cash, a process which they undertook in cooperation with the NBS in four rounds. “The logistics of euro frontloading are also very demanding,” Kováčová said.

Elena Kohútiková, a member of the board of directors of VÚB bank, said that the hardest part of euro adoption for banks is still ahead of them. It is the conversion of all the systems in each bank, which will take place in the first hours that the euro is adopted.

“Currently, a trial of the conversion weekend is taking place,” said Kohútiková. “The trial run will have several rounds during which we will test the ability of information systems to convert all the data in our bank: mainly clients’ accounts - deposit and credit - but also accounting and reporting systems.”

The VÚB bank is also currently engaged in primary frontloading and is preparing for secondary frontloading in December this year, and for the conversion of ATM machines.

“The withdrawal of Slovak crowns from circulation and frontloading of the new currency, which has just begun, will take a relatively long time and is also very demanding logistically,” Kohútiková said.

The bank is also focused on training employees and activities to inform businesses and citizens about euro adoption.

“I believe that the first normal banking day, which will be [Monday] January 5, 2009, will also be the day when we can toast with a glass of champagne the euro’s adoption and a new era for Slovakia,” she added.

Boris Gandel, spokesman for Tatra Banka, agrees that the year-end conversion will be the most demanding stage.

“Currently, we are continuously testing the euro-conversion of the bank in a trial environment which copies real operations as closely as possible, and everything suggests that as of January 1, 2009, we should be prepared in such a way that clients will not experience any stress or problems with the new currency in Slovakia,” Gandel said.

The bank will continue its trial runs until the end of the year so that conversion brings no surprises, he added.

The bank also has to address some technical details connected to the logistics of euro adoption. For example, although the bank has already worked out how to store the euro cash in theory, its plan still has to be applied in practice, Gandel said. Secondary frontloading is another example. The successful accomplishment of distributing the cash to banks’ clients will depend greatly on the responsible approach and cooperation of its clients’.

“At the same time, ATM machines and payment systems will have to be secured in a way that they will be able after a short – at most, three-hour - break to convert from crown operations to euro ones,” Gandel said.

Slovenská Sporiteľňa, the largest bank in Slovakia, is now finalising a trial run of system preparedness for the euro, its spokesman Štefan Frimmer said. The bank is also focusing its attention on withdrawal of the Slovak currency from circulation, which will start on a large scale on January 1.

“Tuning IT systems in such a way that the currency changeover will be handled without problems is the most important, most demanding, and most responsible part,” said Frimmer. “We consider securing a sufficient amount of euro cash for clients the second-most important area.”

Kováčová said that euro adoption will be successfully completed and bank employees will be able to return to standard working time again if frontloading and cash conversion take place without major problems, and if the ATM machines and payment terminals function smoothly and the NBS, along with retail banks, successfully manages the process of withdrawing crown cash from circulation.

In general, banks and large and medium-sized companies have approached preparations responsibly and are well prepared for the changeover, said Igor Barát, the Slovak government’s proxy for euro adoption. He added that he had no knowledge of any problems or risks accompanying adoption in these companies.

“Unfortunately, some smaller firms underestimated the preparations or completely ignored them, despite a massive campaign in media,” Barát said. “However, this situation will not threaten the smooth process of euro adoption, but could cause problems to these companies, their employees, and clients.”