Not enough wind for wind park projects in Slovakia? 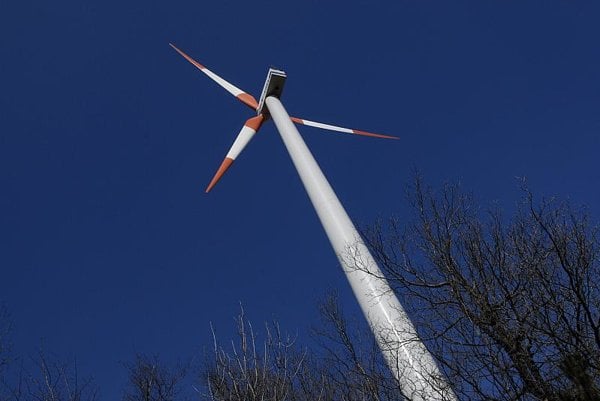 One of the four turbines at the wind park in Cerová. (Source: Jana Liptáková)
Font size:A-|A+

The Cerová wind park celebrated its fifth anniversary on October 10. To mark the occasion, Tomáš Lacko, the legal representative of Green Energy Slovakia, which operates all five of the turbines, unveiled plans to extend the park by two turbines, the SITA newswire wrote. The installed capacity of each will be 2 MW.

In fact, a number of companies have announced plans to install dozens of wind turbines across the country.

“We believe it’s realistic to assume that there will be about 120 wind turbines in Slovakia within the next five years,“ said Daniel Szabo, the chairman of the Association of Wind Energy in Slovakia (ZVES), as cited by the SITA newswire. “This represents an output of about 350 MW.”

ZVES, an organisation of private individuals and legal entities active in harnessing wind energy, was launched in 2005 as an initiative that aims to incorporate this renewable energy source into Slovakia’s portfolio. It sees wind as a source of clean power that prevents waste and saves the country from damage by coal mines and radioactive waste.

ZVES states that wind turbines could provide about 3 percent of Slovakia’s energy needs.
Ventureal is one of the companies that has unveiled plans for wind parks. In April, it announced that it is preparing to construct a wind park near the village of Veľký Kýr, between the towns of Nitra and Šurany, in western Slovakia. It plans to install 16 to 20 turbines with a combined installed capacity of between 32 and 55 MW.

Costs are projected at Sk2 billion, Martin Giertel from the company’s Bratislava branch confirmed for the ČTK newswire.

The company announced as early as last year that a wind park will be constructed near the village of Svodín, between Nové Zámky and Štúrovo, in southern Slovakia. It plans another project in the Záhorie region. There, near the villages of Letničie, Petrova Ves, Šaštín-Stráže Štefanov and Unín, it is planning a wind park with 22-32 turbines. Costs are projected at between Sk2.5 billion and Sk3.6 billion, the SITA newswire wrote.

In total, Ventureal has selected more than 30 locations suitable for construction of wind parks, mostly in the east of the country.

Wind Energie from Banská Bystrica plans to build 12 turbines in Podhájska and Austrian firm Bewag wants to build wind parks in central Slovakia. Enairgy Veterná Energia is looking to invest between Sk950million-Sk1.1 billion into the construction of a wind park with 10-17 turbines and an installed capacity of 20-22 MW, SITA wrote.

Is there enough windin Slovakia?

The projects are now awaiting a ruling from the Slovenská Elektrizačná Prenosová Sústava (Slovak Electricity Transmission System, or SEPS), the national grid operator. SEPS has temporarily stopped issuing permits to investors wishing to connect wind power stations to the grid while it studies the impact wind power stations could have on it.

SEPS writes on its website that an internal review of the study took place on September 25. It is now working to come up with the steps the state should take to address the results and recommendations, it writes.

“At the moment, the study is being provided to authorised state bodies in line with the course published on the website,” Igor Gallo, executive director of the communication department at SEPS, told The Slovak Spectator. “The study’s conclusions will then be made available to the public.”
After the state bodies adopt and issue binding resolutions on the matter, SEPS will proceed with verifying that the investment plan complies with the country’s energy policy, Gallo said.
But it is already clear that SEPS will not green-light all the wind turbine projects.

As the national grid operator, SEPS is responsible for balancing production and consumption in real time. Based on the study’s findings, SEPS will recommend capping the installed capacity of renewable sources of energy, which includes wind power stations, Gallo said. SEPS points to the national grid’s limited absorption capacity from the viewpoint of security and the safety of supplying electricity to end-users in Slovakia.

When collecting data for the study, SEPS found that investors are interested in constructing wind turbines with an installed output of up to 5,100 MW by the end of 2014. SEPS see this as unrealistic.

“The transmission system is unable to absorb such a high number [of wind power plants]. This number will have to be significantly lower,” Miroslav Gramblička, the executive director of SEPS’ development section, said at the Secure Energy Supply 2008 conference, held in early October 2008, as cited by SITA.

While some municipalities like the plans to build wind parks nearby, others are against. For some of them, the turbines can be a source of money, but others are concerned about the visual impact.

“Some people are concerned about the noise, believe the wind turbines will be ineffective, or are unsure about the impact on the environment,” Lacko of Green Energy said, as quoted by SITA. He dismissed all these objections as myths. He also said there is strong opposition to the visual impact that wind power stations will have on the countryside.

“This is the only thing that cannot be measured because it is a matter of personal taste,” he said.
The Environment Ministry has also expressed reservations about harnessing wind energy.
“Wind energy is not among the most perspective forms of energy for Slovakia,” Peter Višváder, the spokesperson for the Environment Ministry, told The Slovak Spectator. “This is simply because the facts do not allow this.

“It is an unsuitable energy source from the viewpoint of connecting the turbines to the electricity grid, as well, because of the swings in output.”

He added, “This does not mean that the Environment Ministry rejects wind energy. But Slovakia has limited conditions for its usage and it is not the answer to all our problems, as some people present it.