THE AUTOMOTIVE industry, which is one of the key industries in the country, initiated the record growth of the Slovak economy over the last several years. But the automotive industry is very sensitive to the changes in global economy. The global crisis thus will have a negative impact on the car industry, and car makers with plants in Slovakia will probably cancel or postpone their expansion projects, according to analysts. 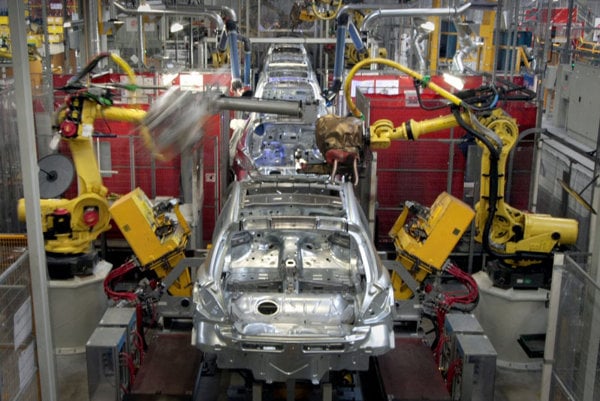 The automotive industry is currently among the leaders in technology. (Source: SITA)
Font size:A-|A+  Comments disabled

THE AUTOMOTIVE industry, which is one of the key industries in the country, initiated the record growth of the Slovak economy over the last several years. But the automotive industry is very sensitive to the changes in global economy. The global crisis thus will have a negative impact on the car industry, and car makers with plants in Slovakia will probably cancel or postpone their expansion projects, according to analysts.

On the other hand, as two out of the three car makers in Slovakia started production within the last several years, analysts do not expect that the crisis will prompt carmakers to move their production further east to find cheaper labour.

“The sensitivity of the car industry is due to the essence of its final product – a car or a motorcycle – which serves for long-term consumption and has a price several times higher than other products for long-term consumption,” said Martin Lenko, senior analyst with VÚB Bank. “This significantly impacts the consumer’s decision-making process when he is debating whether to buy a new car in financially insecure times.”

However, Lenko says the current crisis, which started as a financial crisis, will more or less impact all exporters, not just the car industry, and, at the end of the day, importers will be affected, too.

Slovakia currently produces more cars per inhabitant than any country in the world, and the importance of the automotive industry for Slovakia is indubitable, said Ľubomír Koršňák, an analyst with UniCredit Bank Slovakia.

“As the global crisis has significantly affected global demand in this sector, the Slovak automotive industry has to struggle with decreasing demand too,” Koršňák said. “And because of the significance of the automotive industry, probably the whole Slovak economy will feel the impact.”

However, the Slovak automotive industry still has a comparative advantage in relatively low costs compared to the Western European competition, he added. Thus, the financial crisis could influence the Slovak car industry to a lesser extent than in Western Europe.

Although production might drop year-on-year in the car industry, the decrease is not expected to be significant in Slovakia. However, the development projects which the carmakers had planned for Slovakia will be halted, Koršňák said.

Luxury car production and the production of automotive suppliers whose exports are directed to car plants in the EU will be the first negatively affected by the recession in the EU, said Radovan Ďurana, from Institute for Economic and Social Studies (INESS).

“At the same time the crisis creates pressure toward greater effectiveness or closing down the supplier operations with low added value per employee,” he said.

However, the production of the three car makers is of high added value, said Ďurana. Moreover, PSA Peugeot Citroen and Kia Motors produce relatively inexpensive and fuel-efficient cars in Slovakia. The capacities of the plants are also still not fully used and it is possible that foreign investors will make an effort not only to maintain the production but even to increase it. “Exporters' dependence on Western European markets creates a strong predisposition for a drop in Slovak production,” said Ďurana. “However, it would be too early to estimate any possible drop.”

Juraj Valachy, an analyst with Tatra Banka, stressed that the fact that three international car makers have their plants in Slovakia is still considered positive. The automotive industry is currently among the leaders in technology and production organisation and each economy needs to have a strong industry if it wants to progress.

“Each branch of economy has its better and worse times,” Valachy said. “Currently, for industry there are worse times and relatively better times for services.”


Carmakers and their suppliers are in one boat

As in other countries, the financial crisis has hit mainly the car industry and real estate sector in Slovakia,” said Koršňák. As for the car industry, it does not concern only the car assembly in the three car-making plants but the whole network of suppliers, ranging from the textile and leather industries, plastics and rubber production, metal processing and electro-technical industries to services and logistics.

“The ongoing crisis may, of course, bring further secondary effects such as growing unemployment,” Koršňák said.

Lenko added that the suppliers seeing the largest impacts will be electronic component producers, steel producers such as producers of metal plates and alloys, and machinery plants producing mechanical parts such as transmissions.

If the crisis continues, a drop in production at the car plants and consequently at car component suppliers in the electro-technical industry, chassis producers and others is expected, according to Valachy.

“Secondarily, smaller lay-offs will take place, which will decrease the purchasing power of citizens,” he said. “At the same time the investments into this industry will be frozen.”

Automotive industry will move the numbers

Employees hired as external employees through agencies have already been laid off, said Lenko. And if economic growth slows down even more, lay-offs of their core employees has not been ruled out.

“As a secondary effect of the lay-offs, there is a drop in household consumption and retail sales,” Lenko said. The drop in retail sales would come also as a consequence of stricter conditions for loans by banks, which would impact indebted households whose members had not lost jobs.

A pressure on slowing down the wage growth or its stagnation could also come as another effect. However, the pressure on decreasing inflation then might come as a supplementary effect, Lenko said.

The three carmakers account for about 21 percent of the total exports of the country, according to Valachy. “This means that if their production drops by 5 percent, total exports will drop by Sk16.5 billion,” he added.

And if exports drop, imports will decrease too because the automotive industry imports about 80 to 85 percent of its components, Valachy added.

“That is why the effect on foreign trade overall is not that significant,” he said. “However, the impact on employment would be much more visible as any drop in production would be directly reflected in the number of employees.”

According to Trend Analysis, the car industry currently employs 75,000 people, representing less than 5 percent of the labour force in Slovakia, said Ďurana. However, automotive production indirectly creates jobs and sales in industries such as logistics and construction.

“It is currently difficult to forecast the impact of the recession in the EU and the USA on employment,” Ďurana said. “It is only possible to say that the growth of employment in Slovakia will soon stop or slow down significantly.”

So far, the impact of the financial crisis on the Slovak economy has not been reflected in the numbers of the GDP growth in the third quarter released by the Statistics Office in mid- November, said Koršňák.

However, he supposes that the situation will change in the last quarter and especially in the first half of next year.

“We expect that GDP growth could slow down next year to 4.2 percent instead of the originally projected 6.0 percent,” he said. “However, despite this, Slovakia should keep its relatively dynamic growth and position as a growth leader among EU countries.”

The launch of already prepared production capacities is expected to slow down and their further expansion is expected to be halted, he said. Because of this, the current record growth in employment may remain at this year’s levels.

If some of the Slovak workers who currently work abroad return, unemployment in Slovakia might even mildly increase next year. Difficulties of local companies in selling their products would probably cause slower growth of wages and a higher number of part-time job contracts, Koršňák said.

Automakers to stay in Slovakia

Despite the financial crisis and drop in demand for cars, the analysts do not expect a massive move of automotive production from Slovakia heading for cheaper labour.

“That process is still far away,” said Valachy. “Our wage costs are still significantly lower than in western economies and lower compared to neighbouring countries.”

Moreover, the geographic proximity of the car makers is a good reason for the important suppliers to stay in Slovak territory too. However, car component producers with a high share of manual work are already moving east, and it is impossible to avoid it, Valachy said.

Koršňák agreed that possible move of car makers further east would be costly and of questionable efficiency. “Producers would have to take higher costs of transportation into account, because the Slovak production is still primarily for European market,” he added.

Car production has still not reached even the originally planned capacity, said Lenko. This means that the investments into production have not yet been balanced by the profits, he said.

“The decision to move the production somewhere else would only bring a producer or supplier new costs and the loss of advantages which stem from the production concentration in our territory,” Lenko said. “For this reason I would not expect the departure of any of the large producers over the forthcoming years”.

The price of labour is still extremely attractive compared to Western Europe, according to Ďurana.

“Investments in the car production plants have a horizon of minimally 8 to 10 years and thus over the next period we do not expect existing jobs to move abroad,” he said. However, production of automotive component suppliers with lower added value such as producers of cable bunches can be an exception, he added.