The capital still packs a punch

WESTERN Slovakia has almost always been the most developed part of the country. Its has advanced infrastructure, connections to international corridors and a relatively low unemployment rate. It is home to many large investors and companies such as Volkswagen, PSA Peugeot Citroen, the Slovnaft refinery, the Slovak gas utility (SPP), Slovenské Elektrárne power producer, Sony, Samsung, Leoni, Continental Matador and many others. 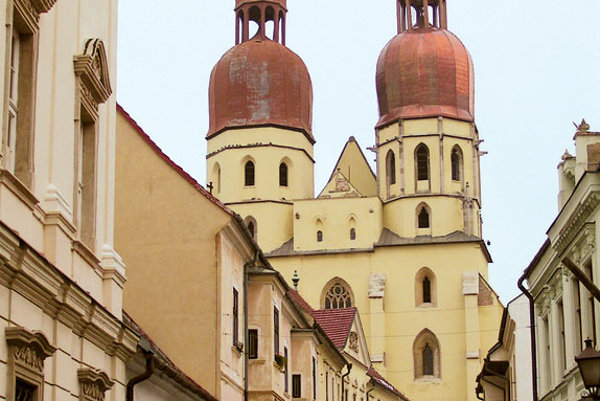 WESTERN Slovakia has almost always been the most developed part of the country. Its has advanced infrastructure, connections to international corridors and a relatively low unemployment rate. It is home to many large investors and companies such as Volkswagen, PSA Peugeot Citroen, the Slovnaft refinery, the Slovak gas utility (SPP), Slovenské Elektrárne power producer, Sony, Samsung, Leoni, Continental Matador and many others.

Western Slovakia takes advantage of the fact that the area including the Slovak capital is of importance both regionally and internationally. Its numerous investors, coupled with a concentration of industrial parks, have created many advantages, but also caused a shortage of qualified labour. Furthermore, the education system has been unable to respond to the needs of the dynamic industrial sector.

The Slovak Spectator asked the country’s four western regions about their current and future development. For the purposes of this short survey, the regions are represented by their press officers: Katarína Krapková for the Bratislava region, Patrik Velšic for the Trnava region, Peter Toman for the Trenčín region and Stanislav Katrinec for the Nitra region.

The Slovak Spectator (TSS): Which areas of the economy do you consider the most developed and prospective in your region in terms of GDP creation?

Katarína Krapková (KK, Bratislava): The Bratislava region is an important GDP generator in Slovakia. It has a high employment rate, a developed business environment, comprehensive services for entrepreneurs, and advanced infrastructure. The region is accessible to investors, and has a large range of administrative premises and locations for development. The Bratislava region generates one third of Slovakia's entire industrial production. The car industry, machinery, electronic industry, chemical and food industry have the largest share of GDP creation in the region.

Peter Toman (PT, Trenčín): A crisis in traditional industries, such as machinery, mining, textile and clothing, spurred changes in the region’s industrial structure. The electro-technical industry has moved into the foreground and the number of suppliers for the automotive industry is also increasing. Of the traditional industries, only rubber, glass, construction and food remain. This is a region of castles, so the tourism, hotel and spa industry also has tremendous potential.

Stanislav Katrinec (SK, Nitra): From the perspective of employment, the industries that have the largest influence on the region are the production of electrical and optical equipment, metals and metal products and the food industry.

However, we could also look at the structure of the Nitra region’s industrial production from the perspective of its impact on economic development, meaning the volume of sales. From this point of view, the industries rank as follows: production of electrical machines and equipment, chemical, food and machinery industries. These are also the largest exporters, as well as the leather industry.

TSS: What are your region’s strengths and weaknesses?

KK, Bratislava: Among its strengths are its national and international importance, the location of the capital, its high rate of economic activity and its concentration of qualified labour that is able to adapt to new technology. The region is also accessible to developed technical and social infrastructure and public amenities. It has a lot of potential for developing towns and villages, with concentrated and diversified educational and research capacities.

I see the region’s untapped potential in the insufficient interconnection between research and the business sector, creation of research and innovation centres, and introduction of new technologies. The region could also use innovation potential in business and services more effectively, introduce information technology into society, resolve issues with transport infrastructure and build an integrated transport system.

PV, Trnava: Its favourable location, transport accessibility and relatively good technical infrastructure. From the other side, the region could be more active in developing its countryside and in education, especially in the areas of finance, law and PC literacy.

PT, Trenčín: Its excellent location; good transport infrastructure, which is a part of Slovakia’s main transport corridors connecting to the trans-European transport system; diversified industrial structure; potential for building industrial and technological parks; and interest from foreign investors. The region also has a high share of small- and medium-sized businesses, a lot of potential for innovation and research development, a developed network of secondary schools and a regional university. The rate of unemployment is low in the Trenčín region compared to some others. The region also has spa centres and potential for tourism.

The downsides are that the region suffers from a lack of investment capital and resources. Its production capacities are not fully used. Also, research, secondary schools and university education are not in tune with the needs of the business sector.

SK, Nitra: The Nitra region’s SWOT analysis showed it has a favourable geographical location with numerous cultural and historical monuments. The region has good potential for using alternative energy, including geothermal sources. It has a positive migration surplus of inhabitants and the population’s productive age is increasing. There are enough green- and brown- field sites for investment. Nitra can also take advantage of the river transport on the Danube by using a port in Komárno.

As for its weaknesses, Nitra does not take advantage enough of its favourable location, and its connection to international transport corridors is still lacking. The region has enough qualified workers in research, but, in general, it suffers from a lack of qualified labour. The education system doesn’t match industry’s needs. Although the region has some large companies with high added value production, the share of low added value production is still considerable. Only a small share of households is connected to the public sewage system. Environment technologies are outdated, and the infrastructure in the area of culture, sports and recreation is insufficient.

TSS: Regions are indispensible for attracting investors because they are best able to identify suitable locations. At the same time, a smooth cooperation with the state is necessary. What is your view of this cooperation, and where do you see weaknesses in the process?

PV, Trnava: The regions’ powers lie in the ability to prepare and work out master plans for where the locations for investors are specified. The cooperation with state administration institutions is on a standard level. The weaknesses are mainly caused by the incomplete decentralisation of the state administration.

PT, Trenčín: The regional administration can innovate and take steps to modernise only within the framework of its powers defined by law. We very often come across the mistaken idea that the region is an almighty coordinator of its economy. We can influence only to the extent that our powers allow us. We can repair second- and third-class roads and modernise social, health, educational and cultural organisations.

However, we also support all the steps that can be useful for the region’s development. The Trenčín region has already cooperated with Trenčín university, the Trenčín Chamber of Commerce and Industry and foreign partners in preparing an EU project Regional Innovation Strategy. The aim of the project was to work out a new economic vision for the region. The project should be followed by the creation of a Regional Innovation Centre that should include an innovation incubator, a technological park, various laboratories, and coordinate cooperation with universities and foreign innovation centres.

SK, Nitra: Despite the fact that the regional administration has no powers in this process and everything is in hands of the local administration, the Nitra region, in its effort to assist in attracting foreign investors, cooperates closely with the Slovak Investment and Trade Development Agency and the Slovak Chamber of Commerce and Industry. It has also worked out a project entitled the Regional Strategy for Development of Key Infrastructure for the Support of Industrial and Entrepreneurial Parks.

TSS: EU funds can be used for regional development. What role do these funds play in your region’s development, and what are the weaknesses in using them?

KK, Bratislava: EU structural funds are seen as additional resources of a non-refundable character. They are mainly focused and used in the area of renovation and reconstruction of municipalities and public spaces to increase the standard of living. They are also aimed at new infrastructure and information technology including e-government services.

It is important to add that, due to its high GDP, the Bratislava region’s options for drawing EU funds are limited.

For the 2007 to 2013 programming period, the areas which will be supported by EU structural funds include increasing the quality of public transport; reconstructing municipalities and preserving national heritage; and improving the environment.

Among others are support to innovations and technologies, e-government services, increasing competitiveness, building a knowledge-based society, international cooperation, support to small- and medium-sized businesses for access to information and communication technology.

I see the largest weaknesses in the fact that the regions have insufficient involvement in the programming, management and implementation of EU structural funds by the ministries and state institutions.
Moreover, we have no access to database and information systems of managing and intermediary institutions concerning EU funds, and we do not have enough information on submitted and approved projects.

The centralisation causes further disparities among the regions.

Other weaknesses are the amount of red tape, the lengthy process for submitting and evaluating applications and a lack of qualified administrative workers. Also, the supported goals and activities are not always well specified, which cause less EU assistance to be drawn.

PV, Trnava: These are only additional resources supporting the region’s development.

I see untapped potential in using them in insufficiently working partnerships and coordination of social-economic partners.

In this matter, the Trnava region is taking specific practical steps in the process of micro-region creation among villages.

The region is involved in creating clusters of partnerships between regional and local administrations, universities, and businesses. There are, for example, automotive, electro-technical and tourism clusters.

Over the period of 2008 to 2013, there are plans to reconstruct 32 secondary schools, 21 facilities for social services and nursing homes, four hospitals, seven cultural projects and at least four road projects.

The EU funds should also be used for the Trenčín regional innovation centre.

SK, Nitra: In this programming period, the Nitra region has competed for finances from EU funds as part of three operation programmes: Agriculture and Country Development, Human Resources and Industry and Services. Among many others, the Nitra Region has created and installed 23 internet terminals in eight regional centres with the help of EU funds. Information systems are being introduced in health care centres in Šaľa and Komárno.

The region has also used EU support to implement the strategic document on the development of the Nitra region.

In the area of renovation and development of municipalities, the funds were used to reconstruct road and pavement infrastructure, public greenery, bus stops and public lights.

Within the human resources area, projects were set up to develop managerial skills for future secondary schools graduates and train the staff at the Nitra Region’s office.