Salvaging a national treasure in their free time 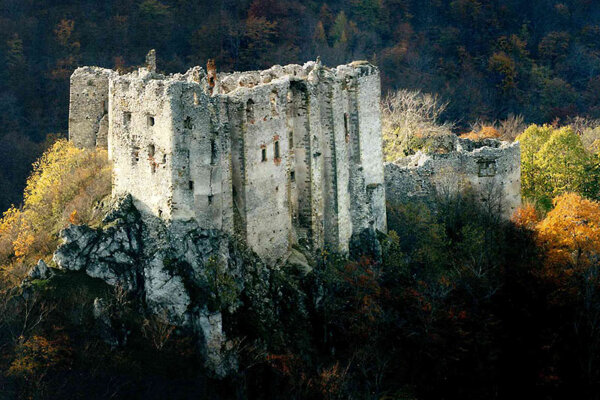 The ruins of Uhrovec Castle are located about 15 kilometres from the town of Bánovce nad Bebravou. Sitting atop a steep hill in the Strážovské Vrchy mountains, it is one of the oldest and most beautiful preserved examples of castle architecture in Slovakia. Even so, Uhrovec is one of the country’s lesser-known castles.

“Uhrovec served as a refuge,” Peter Horanský, who leads the effort to restore the castle, told The Slovak Spectator. “This means that it never controlled or administered a ford, road or other strategic point. In fact, it is hidden among a second line of castles in the Považie region. It was intentionally positioned not to project into the country so it could provide refuge to its owners if the Ottomans returned to ravage the country.”

Peter Horanský knew of the castle long before he finally visited it in 1990.

“When I saw it, how perfectly it is preserved, and how beautifully it is situated in the country, I decided to contribute to its preservation,” Horanský, who works as a conservationist in Bratislava, explained to The Slovak Spectator. But it would take another 10 years before the restoration could begin.

Horanský helps restore the castle in his free time.

“Some colleagues and I established the Foundation for the Rescue of Cultural Heritage, which does not confine its activities to Bratislava,” Horanský said. “Uhrovec is our pilot project. But we have carried out educational courses for children and supported other projects, too.”

Research that the foundation conducted in 1998 and 1999 identified the most valuable parts of the castle, which dates back to the 13th century.

“The age of the timbers indicates that the castle was built between 1251 and 1254,” said Horanský. Its construction was a response by local landlord Báš to Ottoman raids in 1241-1243. The construction was gradual, starting with a Romanesque square-shaped tower. Later, a triangle-shaped tower was erected, and then a palace. The latter no longer exists, but an adjacent chapel from the Late Romanesque period remains. The castle was rebuilt and extended over the following years.

“This is why the castle is interesting,” Horanský explained. “Its Romanesque ground plan and original Romanesque elements are preserved. They were not significantly rebuilt, but they were incorporated into later objects. This makes Uhrovec one of the best-preserved Romanesque edifices. The Renaissance additions are also very well preserved. It documents the standard of housing in that period of time.”

The research enabled the foundation to develop a restoration project that it submitted to the Headley Trust, a private fund in Britain, which allocated 60,000 pounds (then about Sk4.2 million).

But the money was pledged on the condition that the foundation also raise funds from other sources. The foundation eventually received financial support from the Slovak Culture Ministry as part of the “Restore your Home” project and from private sponsors.

“So far, we have invested Sk8 million in the castle,” Horanský told The Slovak Spectator.

The restoration effort focused first on securing the castle’s stability, ensuring it wouldn’t collapse and would remain safe for visitors.

At first, only volunteers worked at the castle. They removed and sorted debris, which was then used to restore the castle, removed vegetation and built access paths.

Later, local masons were brought in. The restoration also involved fixing and completing some vaults in the Renaissance palace.

The tops of the ruins were sheltered with a temporary roof to protect them from unfavourable weather and allow the work to continue in adverse conditions.

During this phase, Horanský and the other restorers uncovered a Renaissance fireplace in the palace that had only been shown in historical drawings.

They also discovered tiles from stoves, pieces of ceramics and pieces of historical weapons.

The restorers’ objective is to preserve the castle in its current condition and prevent it from deteriorating further.

“We want to preserve the tops of the castle’s walls and put a permanent roof over the chapel and the Renaissance palace,” Horanský said. “The castle will become ‘a roofed ruin’, as the walls will be covered, but not finished. This is a way of acknowledging and accepting the castle’s age and condition.”

This means the castle will be restored to more or less its condition in 1848, when it burned down and was abandoned.

The vaulted rooms will serve as an exhibition space devoted to the castle’s history and host banquets with period meals. Horanský would also like to see historical fencing groups perform at the castle.

“The castle itself should be a huge exhibit that offers a unique opportunity to watch the development of the castle’s construction, because there are a lot of situations in which Romanesque masonry is used in a Renaissance interior,” Horanský said. “There are a number of interesting architectural details, historical toilets, fireplaces and a cistern that have not been preserved in other castle ruins. But this is the vision for my lifetime, or the next several decades. If there were money, it would be possible to do it more quickly. For now, I see it being opened as a museum in 10-20 years.”

The next plan is to replace the castle’s temporary bridge, which is made of tube scaffolding, with a new one made of beech timber.

“Probably a similar beech bridge was here in the 18th-19th century,” Horanský told The Slovak Spectator. “We will construct it during an international workshop planned for the end of April and the beginning of May. Everything will be made by hand.”

Another reason the construction cannot proceed much faster is because most of it is being carried out using historical technology and original materials.

Also, the castle is inaccessible by a car, so everything is brought in by hand.

Funding is always on the agenda

Raising funds to pay for the reconstruction remains a problem.

“It would be ideal to have a budget of about Sk1 million (€33,194) for one year, with the chance to receive a similar amount for the next 2-4 years,” Horanský told The Slovak Spectator. “This would enable us to make more long-term plans.”

The fact that the castle belongs to the Archbishopric of Nitra also complicates the situation, since this prevents the Foundation for the Rescue of the Cultural Heritage from applying directly for EU funds or financial support from the Culture Ministry.

The plan is for the foundation to take ownership of the castle rather than rent it, as it has for 30 years.

In the meantime, Uhrovec Castle and the story of its restoration prove the importance of taking action.

“When I look at the photos, I see how much we have changed the castle,” Horanský told The Slovak Spectator. “If we hadn’t done this work, so much of it would certainly not be preserved. So I think it has made a difference.”