ANOTHER minister in the Robert Fico government is facing accusations of awarding state contracts to companies with ties to the ruling coalition. Marián Janušek, a Slovak National Party (SNS) nominee who heads the Construction and Regional Development Ministry, has been criticised for granting a €98 million (Sk2.95 billion) contract to two firms, Avocat and Zamedia, which have links to SNS chairman Ján Slota. 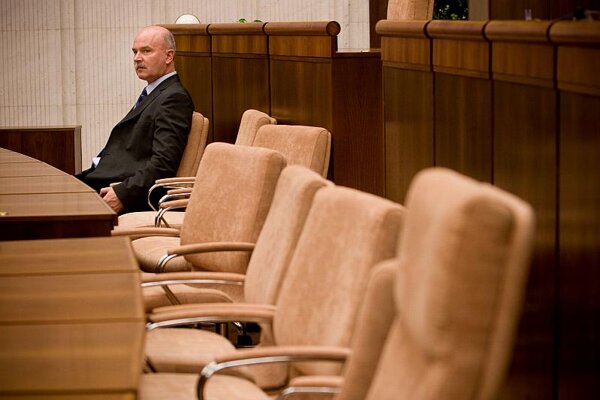 ANOTHER minister in the Robert Fico government is facing accusations of awarding state contracts to companies with ties to the ruling coalition. Marián Janušek, a Slovak National Party (SNS) nominee who heads the Construction and Regional Development Ministry, has been criticised for granting a €98 million (Sk2.95 billion) contract to two firms, Avocat and Zamedia, which have links to SNS chairman Ján Slota.

The money was approved through an order for services that the firms will provide as part of a European Union-funded campaign about EU funds. The EU has allocated a total of Sk3.6 billion (€119.5 million) for the campaign.

News of the order first appeared in the Plus Jeden Deň daily, which broke the story on November 11.
But what differentiates this case from others is that Vladimír Mečiar, chairman of the Movement for a Democratic Slovakia (HZDS), which is also a member of the ruling coalition, has joined the chorus of Janušek’s critics.

Nonetheless, the SNS and Janušek have mounted a vigorous defence, rejecting accusations of cronyism and accusing journalists of sensationalism.

The contract in question

Avocat and Zamedia are members of a four-company consortium that the Construction Ministry selected to provide informational, educational, and promotional activities, as well as legal and interpreting consultancy services, as part of the campaign about EU funds.

Under the terms of the ministry’s contract, which was published on its website after weeks of pressure from the media, the consortium was promised Sk25,000 (€829) for providing a single day of training. If the training was performed by a foreign instructor, the price was Sk70,000 (€2,323) a day.

“Foreign consultants are usually paid about €1,000 (Sk30,000), and that’s for a top expert,” Ctibor Košťál, who oversees education and EU funds at the Slovak Governance Institute, told the Pravda daily in November.

Critics also cite a provision in the contract that allocates Sk170,000 (€5,643) per advertising spot on the TA3 and JOJ television stations, which is much too high, according to experts interviewed by the Sme daily; and a provision that gives the consortium exclusivity until 2015.

At a joint press conference on December 2, Slota and Janušek accused the media of misleading the public and trying to score points against the SNS.

“I don’t know who is coordinating this from behind the scenes,” he said.

Janušek charged that journalists were “bombarding the public with … absurdities, lies and deceit”.
So far, Fico has not openly criticised Janušek. On November 25, he commented only that the Supreme Audit Office (NKÚ) and the Office for Public Procurement (ÚVO) should review the contract.

“His position depends on what these bodies say,” Fico stated.

But Mečiar has been a vocal critic, saying the case represents “cronyism as big as Brno” (a city in the Czech Republic).

“If, within a party, money is divided among the closest people and the party leadership, then this is cronyism. This cannot be called anything else,” Mečiar told STV on November 30.

At the press conference, Slota countered by saying that Igor Štefanov, the general manager of the Agency for the Support of Regional Development, which is part of the Construction Ministry, received an assessment of the tender’s legality from the Office for Public Procurement on May 27.

The ÚVO concluded on July 3 that none of the parties had taken any actions that could have influenced the results of the procurement, he said.

But Helena Fialová, a spokesperson for the ÚVO, told The Slovak Spectator that the office had not completed its inspection yet.

“The ÚVO’s approval was based only on its opinion of the announcement of the results of the competition for the tender,” Fialová said.

She commented that she could not estimate when the inspection would be finished.

At the press conference on December 2, Slota did not deny that he knows people who work for Avocat and Zamedia, but said their connection to him was irrelevant.

The Slovak Spectator asked Slota who is really in charge of the Construction Ministry, considering that he is explaining the tender’s background rather than Janušek. His response was that Janušek is the party’s nominee, but responsibilities are divided like in a household, where a husband supervises his wife.

During the press conference, Slota took the opportunity to blast journalists for their questions.
“You have gathered here like crows on a heap of dung, who want to prove any way possible that [Janušek] did something wrong,” he charged.

Janušek denied dragging his feet in informing the public about the contract, or not volunteering all the information about it. He blamed the media, who he said don’t fully understand the complexities of EU funds, and lambasted journalists for taking answers out of context and posing questions that achieve little but to slow the ministry’s work.

Janušek said the announcement of the tender was posted from May 17 to May 22 on the ministry’s official board, which is inside the ministry, and that the consortium was the sole bidder. He refused to elaborate further, saying that more would be revealed as a result of the inspection.
Iván Farkas, vice-chairman of the Hungarian Coalition Party (SMK), told journalists on November 26 that European Union funds to the Construction Ministry are supposed to be directed to construction, investment programmes or acquiring machinery, not information and consultancy.

“So billions were spent on the ‘soft’ services,” Farkas said.

Pavol Hrušovský, the chairman of the Christian-Democratic Movement (KDH), told journalists on December 2 that the opposition is drawing up a no-confidence motion against Janušek. As billions of crowns were involved, Hrušovský said, the tender should have been published in the Public Procurement Journal immediately.

SMK MP Gábor Gál, who went to school with Juraj Hatvany – an associate at Avocat – told the Sme daily in March 2008 that Slota and Hatvany are well acquainted.

“Avocat has a partnership with the SNS,” Gál said. “It audited the Construction Ministry, and performed all of Slota’s legal services.”

Moreover, Hatvany heads the Board of Slovak Post. Juraj Mravčák, another associate at Avocat, is head of the Railways Board at the Construction Ministry , which is also state owned, according to the Plus Jeden Deň daily.

The second firm, Zamedia, was founded shortly after the general elections in June 2006. Plus Jeden Deň reported that Viktor Tretina, an associate there, has close ties to Slota.

Last year, two months before the contract with the Construction Ministry was concluded, Tretina openly admitted that Zamedia had neither experts nor experience with training about EU funds.
“But these days it isn’t a problem to bring someone in; you don’t need to have an internal employee,” he told the Pravda daily on August 22, 2007.

What do think tanks say?

According to Emília Beblavá, head of the Transparency International Slovensko, the Construction Ministry tender should be scrutinised by the ÚVO and NKÚ.

“If an error was made, an administrative sanction should be imposed,” she told The Slovak Spectator.
She added that it is up to Prime Minister Fico to decide whether to dismiss Janušek.

“We just have to hope that he will hold this minister accountable, as he has done in other cases,” Beblavá added.

However, if the inspection concludes that the Construction Ministry erred and Fico does not react, this could send the wrong signal to the business and political environment, Beblavá said.

“Their interpretation might be, for example, what matters most is how close you are to the prime minister and his people,” she said.

Zuzana Wienk, head of the Fair Play Alliance, believes that the scandal has created a cloud of suspicion that cronyism took place.

She told The Slovak Spectator that the number of similar cases has increased. “Unfortunately, from my point of view, cronyism has become the norm,” she said. “And this is a dangerous trend.”