THE HISTORY of Korean investment in Slovakia dates back to 2002, when one of its main players in the electro-technical industry set up production here. The second milestone occurred in 2004, when a South Korean carmaker announced it would invest in Slovakia, according to the Korean Embassy.Since then, 70 Korean companies have invested about $2 billion in Slovakia and hired about 20,000 Slovak employees. Korean entrepreneurs praise Slovakia’s business environment and its location, which allows for easy access to the EU market. The disadvantages are red tape, lengthy administrative procedures and an outdated education system, they say. 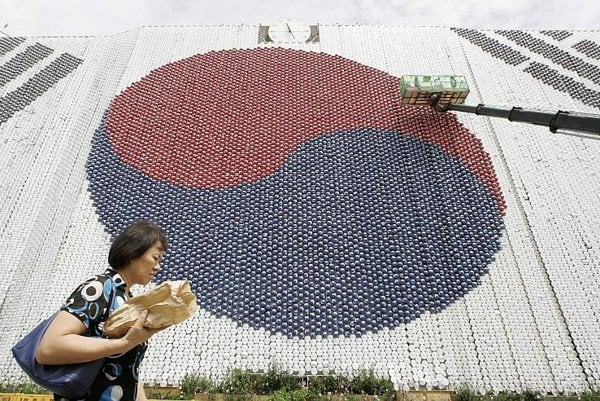 Seoul City Hall, pictured covered by a South Korean national flag made of about 27,000 plastic balls, in August 2008. The flag was made to commemorate Liberation Day on August 15. (Source: Reuters)
Font size:A-|A+

THE HISTORY of Korean investment in Slovakia dates back to 2002, when one of its main players in the electro-technical industry set up production here. The second milestone occurred in 2004, when a South Korean carmaker announced it would invest in Slovakia, according to the Korean Embassy.
Since then, 70 Korean companies have invested about $2 billion in Slovakia and hired about 20,000 Slovak employees. Korean entrepreneurs praise Slovakia’s business environment and its location, which allows for easy access to the EU market. The disadvantages are red tape, lengthy administrative procedures and an outdated education system, they say.

The cumulative volume of foreign direct investment in Slovakia reached Sk782.092 billion as of the end of 2007. Of this, South Korean investment represented Sk21.928 billion, making it the eighth largest investor in Slovakia, according to preliminary data from the National Bank of Slovakia.
“I would like to underline Slovakia’s advantages, such as its low-cost labour force, access to western European markets enabled by its entry into the EU, and its geographic position in the centre of Europe,” Jaesoon Hahn, counsellor at the Korean Embassy, told The Slovak Spectator. “These are the most crucial considerations for Korean investors.”

Korean investment in Slovakia arrived in three waves. The first significant investment was made in 2002, when Samsung Electronics put $100 million into the town of Galanta, and moved there with its suppliers, Hahn said. Then, in 2004, Kia Motors set up a plant in Slovakia and also brought along its suppliers. And in 2007, Samsung LCD invested €3.2 in Voderady, where it opened a plant in October 2008.

Kia’s, which was worth €1 billion and – along with its suppliers – currently employs more than 10,000 Slovaks, can be seen as a milestone for Korean investment in Slovakia, Hahn said.

“I have no doubt that Kia’s successful investment in Slovakia had a big impact on other Korean investors,” she said. “Clearly, Slovakia has become more prominent in their minds as an investment destination.”

Kia’s success assured them of Slovakia’s safe and business-friendly environment. It also provided them with a well-established Korean community that could help their families settle into life in a foreign country, Hahn added.

“In general, Korean investors are satisfied with the business environment in Slovakia, otherwise they would not have come in the first place,” she said.

However, the Korean embassy continues to field complaints from Korean investors about the long and complicated procedural requirements, administrative processes and red tape involved in obtaining permits, including residence permits, from Slovak state agencies. Other complaints concern insufficient infrastructure, such as highway connections, Hahn said.

Hahn said that there’s an expectation that Korean businesses will invest in local research and development, but she noted that research and high-tech industries require a sufficient supply of highly qualified human resources and researchers.

“I would suggest that Slovakia make more of an effort to reform its educational system to meet these needs, or change the immigration system to attract foreign minds,” Hahn told The Slovak Spectator. “It is also important for Slovak universities to take industries’ needs into consideration and decide what expertise to offer to foreign investors and industries.”

The economic relationship between South Korea and Slovakia is based mainly on direct investment by Korean investors in the manufacturing sector. However, foreign trade also plays an important part of the economic cooperation, Hahn said.

Trade between the countries has expanded rapidly since 2002, she said. The total volume of trade for this year is expected to reach more than $3 billion, a 100-fold increase compared with 2002, according to Hahn.

From this January to October, Korea’s exports to Slovakia were $3.069 billion and its imports from Slovakia stood at $72 million, according to statistics from the Korean Customs Service. Among Korea’s main exports to Slovakia are auto-parts and flat panels used for car and electronic production.

The trade is rather unbalanced, with a much large volume of imports reported from Korea than Slovak exports to Korea, Hahn said. This imbalance is largely caused by the dramatic increase in imports by Korean companies that made Slovakia their manufacturing hub in Europe, she added.

The embassy hopes that the countries’ economic relationship will develop further. This year, the embassy received two trade missions from Korea. The Korea Importers Association (KOIMA) came in June to examine the potential for imports from Slovakia, and in November a dozen Korean businessmen in the auto components industry came in search of further business opportunities.

“However, we were a bit disappointed with Slovak businesspeople’s attendance in matchmaking meetings, despite promotion of these events by SARIO [the Slovak Investment and Trade Development Agency] in cooperation with this embassy,” Hahn said. “But I am sure that the contacts made during those visits will serve as a stepping stone to enhance more robust cooperation between them.”

The largest Korean investors in Slovakia, Kia Motors and Samsung, are among the country’s largest companies. On a list of 10, Samsung Electronics ranks third largest and Kia Motors ranks sixth, Hahn said.

Kia Motors Slovakia, based in Teplička nad Váhom, is the carmaker’s first assembly factory in Europe. More than 2,800 employees work there in two shifts. The plant currently manufactures the five-door hatchback Kia cee’d, the cee’d_sw estate and the three-door hatchback pro_cee’d, as well as the sporty compact SUV Sportage. Production of the third model has been planned for the beginning of 2010.
The Kia Motors Corporation announced at the end of November that it is thinking of building a new production hall for production of engines in Europe, an investment worth up to €200 million. Kia Motors Slovakia applied for this investment. The new hall would bring an additional 400 jobs to Slovakia.

The company will settle on a site for the new hall by the end of this year, the SITA newswire wrote.
Samsung’s plant in Galanta is its largest in Europe. It manufactures TV sets, LCD monitors, plasma screens and other equipment there. This October, the company opened its new LCD module production plant in Voderady, near Trnava.

As of the end of 2007, Samsung has 4,478 employees in Slovakia. The plant in Voderady currently employs 800. Yeong-Duk Chotold, vice-president of Samsung, said at the Voderady plant’s opening that the financial crisis will not affect the company’s production plans.