The magic of Ruthenian Christmas

The cultural diversity of Slovakia is probably most remarkable in the East, where several important minorities live side by side. One of them, however, had to wait for an official acknowledgement longer than the others, for its similarity with better-established Ukrainians was causing regular confusion, which did not end until the fall of communism. 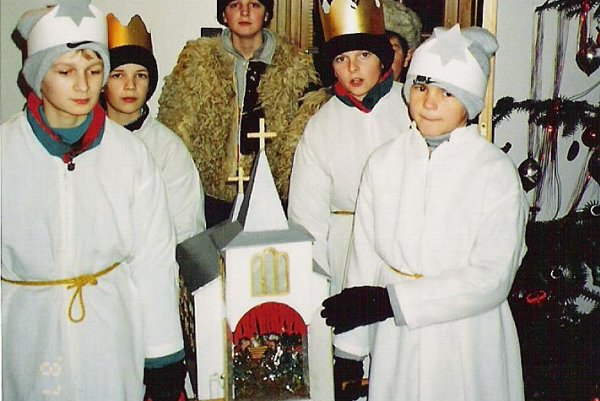 The cultural diversity of Slovakia is probably most remarkable in the East, where several important minorities live side by side. One of them, however, had to wait for an official acknowledgement longer than the others, for its similarity with better-established Ukrainians was causing regular confusion, which did not end until the fall of communism.

Rusyns often used to call themselves “the people from nowhere”, because they have never had their own state. Being dispersed throughout Slovakia, Poland, Ukraine, Hungary and Romania, their unity was broken with the emergence of new borders in the early 1900s.

Their traditions, however, have been preserved despite the strong assimilation with the majority cultures of their host countries, and even today, they protect their lore with consistent efforts. Numbers tell their own story. While in the 1991 census, only 17,000 people declared themselves Rusyns, it was 24,000 in 2001.

This pride is obvious particularly in Christmas time, when small villages near Ukrainian borders fill with Ruthenians otherwise living and working in bigger cities such as Prešov, Poprad, Gelnica or Stará Ľubovňa. Although many customs have been a trifle “modernised” and “slovakised”, the Ruthenian Christmas table can still be easily distinguished from a traditional Slovak one, with the meals not being the only difference.

“The Christmas dinner is being prepared from the early morning and it must not contain any meat, milk, butter or eggs,” said Anna Blichová from the Institute of Rusyn Language and Culture, which operates under the University of Prešov. “Great pains are taken to strictly keep the traditional fast. The family is allowed to eat only once before the dinner, and it is only a small snack that also has to be meat, milk, butter and egg-free.”

Blichová also stated that Rusyns, similarly to the Slovak majority, devote the whole day to decorating their houses and Christmas trees. They, however, do not start eating immediately after they finish the cleaning.

“Before the dinner, all family members have to symbolically wash themselves in cold water,” she told Spex. “In villages they usually do so in a stream or a well. Washing their faces is supposed to ensure beauty, while the cold water keeps health.”

After this ritual, the family can sit down to the Christmas table.

“The mother then puts a banknote with the highest worth possible under the tablecloth so that the family be wealthy,” Blichová said. “Furthermore, a hammer symbolising success at work and a chain ensuring solidarity have to be put under the table. In the past, the chain used to be tied around its four legs.”

After a silent prayer, the father traces a cross on the foreheads of all family members with honey, saying “be as good as honey”.

“This ceremony finished, the family finally starts eating,” Blichová continued. “As the first course they have garlic, honey, bread and salt. The former two are eaten for health, the latter two in hope that there will never be lack of them in the house.”

The second course consists of mushroom soup, mačanka (mushroom dip), bobaľky (small balls of dough sprinkled with poppy seeds), pirohy (boiled dumplings) with cabbage or potatoes, and fish with potato salad. Out of these meals, only pirohy with cabbage are typically Ruthenian.

Interestingly, there is always one extra seat at the Ruthenian Christmas table.

“The vacant chair and empty plate have two functions,” Blichová told Spex. “Firstly, it is prepared for any wayfarer who would need refreshment. And secondly, it is a tribute to All Saints, or, in other words, the deceased members of the family.”

At the end of the dinner, an apple is cut in halves. If it is sound, the family should be healthy during the whole upcoming year. Then another prayer follows and several carols are sung afterwards.

“The last ritual is blowing out a candle,” stated Blichová. “If the smoke rises straight up, the family is supposed to meet the following year at full strength. Otherwise there will be some member missing at the Christmas table. In the end, people exchange presents and enjoy themselves.”

As an overwhelming majority of Rusyns are members of two Eastern Orthodox Churches, the evening culminates with a mass, which, unlike in the Catholic Church, begins at 21:00 or 22:00 and often lasts three hours.

For religious reasons, some Ruthenian people use the Julian calendar, which is in a slight discrepancy with the modern Gregorian system. As a result, they sometimes celebrate Velija, or Christmas, on January 6.

“This, however, does not mean that December 24 is an ordinary day for such families, and they often even celebrate twice,” Blichová explained.

Peter Štefaňák, president of the Molody Rusyny (Young Rusyns in Ruthenian) association that was recently established to promote Rusyns and raise general awareness of their culture, said that preserving at least the most widespread traditions was essential for developing the once obscure Ruthenian identity.

“I think that all these customs bring us closer to the times of our parents and grandparents,” he told Spex and added that Rusyns should not neglect their Christmas rituals as it is often the case with some modern families. “At Christmas I feel the atmosphere that was once so intensive. Every single tradition has its meaning and they always work their magic on me. I cherish them even more when I think of how many different customs there are even in such a small country as Slovakia.”