He has a reputation as a peace broker because of his contribution to the peaceful separation of Czechoslovakia as the speaker of the federal assembly in 1992. On the other hand, after becoming Slovakia’s first post-revolution president from 1993 to 1998, he found himself in serious conflict with the new country’s authoritarian prime minister, Vladimír Mečiar, and experienced a turbulent few years both in office and in his private life. 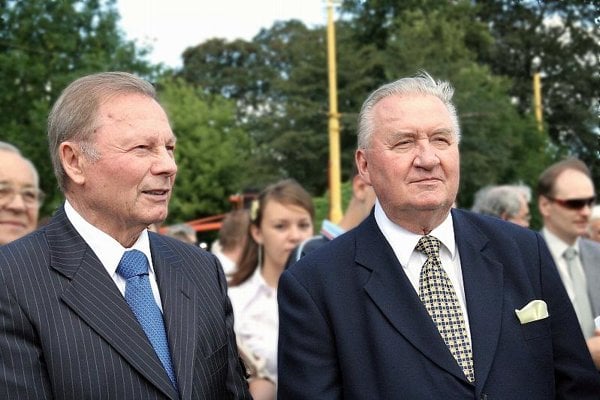 Michal Kováč (right) was the first president of independent Slovakia, serving from 1993 to 1998. His successor, Rudolf Schuster (left) was elected in 1999. (Source: SITA)
Font size:A-|A+

He has a reputation as a peace broker because of his contribution to the peaceful separation of Czechoslovakia as the speaker of the federal assembly in 1992. On the other hand, after becoming Slovakia’s first post-revolution president from 1993 to 1998, he found himself in serious conflict with the new country’s authoritarian prime minister, Vladimír Mečiar, and experienced a turbulent few years both in office and in his private life.

In Slovakia’s formative political struggle in the 1990s, President Michal Kováč was often cast as the defender of the country’s pluralistic democracy, while Mečiar was seen as a throwback to more autocratic times. The kidnapping of Kováč’s son to Austria – blamed on Mečiar’s secret service but never solved due to a blanket amnesty issued by Mečiar himself – symbolized the trauma of the transition from Communism to democracy.

Today, Michal Kováč is the head of a foundation he set up after leaving the presidency in 1998 with then-Czech President Václav Havel. In August 2008 he admitted that he was suffering from Parkinson’s Disease, but he continues to work at the foundation and at home on his autobiography.
In the first of a two-part story, SPEX looks at Kováč’s life up to November 1989.

Looking back at his early years, Kováč said he could scarcely believe how much his life had changed from his impoverished roots. “It didn’t affect my childhood too much,” he said in an interview with SPEX. “Children tend to believe that the life they are living is totally normal and is the best of all possible worlds.”

Kováč was born in August 1930 in Slovakia’s Far East in the municipality of Ľubiša near Humenné. The household had no electricity, gas or plumbing. Its members washed themselves in cold water from buckets drawn from the well, or in a nearby stream during the summer. “On the homestead, everything that could possibly be made by hand was made by hand,” he said. Some villagers grew hemp in the fields that was processed into material to make clothes, curtains and other fabrics.”

The young future president grew up without a father, raised by his mother in straitened circumstances in the household of her relatives. When he was five, a horse kicked him in the head, and for the first time in his life he left his home villafe on the train for Humenné, to find a doctor to stitch his wound.

From the windows of the train he watched entranced as the countryside slipped by. For the first time he also saw an airplane. “In the city, in Humenné, I saw different kinds of houses. It was a great experience,” he recalled.

Back in those days, people ground wheat by hand. The sheaves of wheat were carried to barns and were threshed by hand with flails until the grain fell from the plants. “We used to get completely covered with chaff,” Kováč said, adding that the labor was made worse by the thistles and thorns that lurked amidst the wheat and would prick the threshers’ skin. “Everyone was just waiting for the threshing to be over so they could go and wash off.”

Later, wealthier families in the area were able to buy threshing machines, which meant they no longer had to use the manual flails.

The young Kováč was always excited when the theater or musicians came to town. The local kids would always run to the place where the musicians were playing and listen while the adults danced. Later, as a young man, Kováč found he was too shy to ask strange girls to dance, so he asked his cousin Anička to teach him in their home.

“He was a good kid who never hurt anyone, and from a young age everyone in the village liked him,” said.


The Second World War also affected the tiny village of Ľubiša, where five Jewish families lived – one of them right beside the Kováč family. He still remembers saying goodbye to his neighbors in 1942 when they were deported to the Nazi death camps.

“Jolanka was about my age,” Kováč said. “I’ll never forget how she climbed up on the wagon they had waiting for her. Everyone was crying.” None of the Jews deported from Ľubiša returned after the war. “As children we didn’t understand what deportation meant, but we realized it was something unnatural,” Kováč said.

In 1944 the Kováč family was evacuated to a village near Michalovce because the front was approaching. But the front caught them there as well, and Kováč and his relatives hid in a haystack near a barn where they concealed a wagon containing their belongings. Kováč was the last to burrow into the haystack, and thus was the first to see the flames. “Fire!”, he screamed.

The family tumbled out of the hay. The fire was in the barn where all their clothes and possessions were hidden. It was too hot to pull the wagon out.

Despite their straits, they realized they needed a new place to hide, because the artillery fire had not abated. They decided to go to a neighbor’s house, where the walls were of mortar and stone. “I remember pulling my mother by the hand because she was in a bad state,” Kováč said. He was 14 at the time.

After about a month they were able to return home, and found their residence intact and undisturbed. They felt saved, and did not regret the possessions that had been burned, even though they lacked the most basic clothing. The young Kováč, however, was sad about his violin, which had burned up. He never got another – after the war, life wasn’t so easy.


As Kováč remembers it, people were generally pleased that the war was over, and that instead of the fascist Slovak state, the Czechoslovak federation was renewed. “We were excited to be starting a new life.”

But in February 1948, democracy was overthrown in Czechoslovakia, the Communist Party took over in a dictatorship, and the country became a satellite of the Soviet Union. Then 18, Kováč was already aware of the significance of the changes taking place.

Or even more than aware. His uncle was jailed by the police for opposing collectivization, which meant giving up title to his land and other property, handing it over to the collective farm, and going to work as a common laborer. He was held for five days and then released after agreeing to the Communists’ conditions. “We realized that no one could oppose forced collectivization,” Kováč said.

The uncle in the end became a railway laborer whose pay was enough to support the family “relatively well”.

Kováč had another uncle who lived nearby and who tried to convince him to join the Communist Party. This uncle swore that even good Catholics could be party members, and gave himself as an example.

Kováč liked the fact that the Communists seemed to be trying to achieve some sort of social justice, so he closed his eyes to the wrongs that he saw committed. “I told myself that the regime was basically a just one, and that it should be supported,” he said.

In 1948 he joined the party. As he tells it, even though he soon realized he had made a mistake, he didn’t quit the party because he thought he could influence it more from the inside than the outside. Besides that, as he disarmingly admitted – he didn’t have the guts to leave. “I had seen what happened when someone chose that course.”

And so he remained a member of the party until 1970, when he was expelled.

In 1951 he was admitted to the Economics University in Bratislava, and left Ľubiša for good. He has since lived in Bratislava.

Kováč said he welcomed the democratization process that peaked in 1968, which was known as ‘socialism with a human face’. He served on a variety of commissions that prepared democratic changes in the control apparatus. But in August 1968 those plans were dashed when Czechoslovakia was occupied by Warsaw Pact troops.

Curiously, progress continued towards the creation of a Czech and Slovak federation that had started as part of the democratization movement. Changes occurred on the government level as well, as in addition to a Czechoslovak government, republican administrations were created in the Czech and Slovak lands as well.

At this time, Kováč became the Slovak candidate for the post of governor of the Czechoslovak state bank. He started to travel to Prague for training sessions. “I helped to prepare new laws for the creation of the federal national bank,” he remembered.

But in the summer of 1969 he learned that he had been struck off the list of candidates, and that Rudolf Rohlíček had been given the job that was supposed to go to him. Kováč returned to his previous function as director of a regional branch of the state bank.

Kováč was then summarily expelled from the party during the purges of the early 1970s, in which commissions investigated who had supported the democratization changes advocated by former general secretary of the Communist Party Alexander Dubček in 1968.

“The question arose of what to do with me. They looked at all kinds of solutions,” Kováč said.

The Communists gave him an office at the bank, but no work to do. So he sat there idle for more than a year. Today he looks back on that period as one of the most frustrating in his life. Finally they offered him a job as a section chief in a branch of the National Bank, which he accepted with joy, even though he had never been a section chief.

“From that period on, I basically just waited for change to come. It took almost 20 years.”
When November 1989 arrived, he was 59 years of age, and ripe for a political function. “I had the enormous good fortune to be taken into politics immediately,” Kováč said.

He became the minister of finance in the ‘government of national reconciliation’, formed in December 1989 after the Communist government resigned. He held the post until June 1990, when the government was replaced by the first Mečiar administration.

“It was then that I realized the incredible responsibility that we all had to show the world and ourselves that a social order built on freedom is more just than the one we had known before.”

NEXT ISSUE: Michal Kováč describes the dissolution of Czechoslovakia and the fight for democracy.