THE WINNER of one of Slovakia’s most closely-watched multi-billion-crown tenders has signed a contract with the national highway company to provide a nationwide electronic road toll collection system. 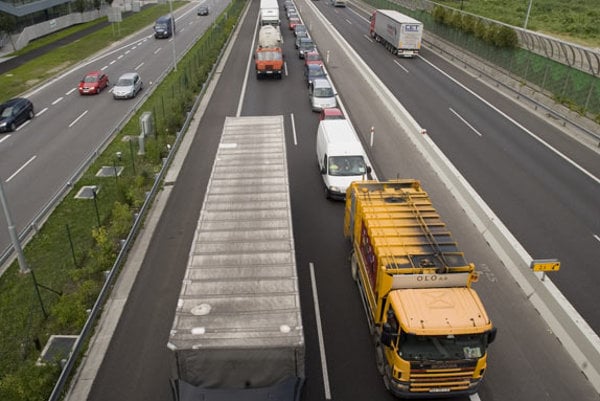 THE WINNER of one of Slovakia’s most closely-watched multi-billion-crown tenders has signed a contract with the national highway company to provide a nationwide electronic road toll collection system.

The contract, signed on January 13, in fact wraps up a contentious process which suffered two failed launches, three disgruntled bidders, more than dozen complaints filed with the procurement authority and two inquiries by the European Commission.

While the Ibertax-Santoll consortium (now operating as SkyToll) was announced the winner as early as May 2008, it was able to seal the deal only after the Public Procurement Office (ÚVO) on December 8 rejected the final objections among more than 12 complaints submitted by the excluded consortia.

In fact, the contract was signed before the Ministry of Transportation had dispelled concerns that the European Commission has expressed regarding the toll tender. The commission requested additional information from the ministry in late December.

The official deadline for signing the contract to build an electronic highway toll system for 2,435 kilometres of the road network and operate it for 13 years was January 31, 2009, according to the National Highway Company (NDS).

“We have lost too much money due to delays in toll collection to afford further comfort,” said the head of the NDS, Igor Choma, as quoted by the Sme daily.

The state had originally planned to have the toll collection system functioning from January 1, 2009, for vehicles weighing over 3.5 tonnes.

The European Commission current enquiries about the tender, lodged with the National Highway Company (NDS) and the Slovak procurement authority, are the second time it has taken an interest in the tender, the SITA newswire reported.

The SanToll-Ibertax consortium won the tender with a bid of €852.1 million, including VAT. It was the highest bid received. Among the competing bidders, Slovakpass, led by the Italian company Autostrade, proposed to charge only €630.9 million.

The bid from the Slovak-Swiss consortium ToSy was for Sk19.62 billion (€651.3 million) and Kapsch, headed by the Austrian firm Kapsch TrafficCom AG, Vienna, bid Sk22.57 billion (€749.2 million), according to SITA.

The NDS subsequently excluded all the bidders except SanToll-Ibertax.

Both Slovakpass and Kapsch then went to the ÚVO to challenge the de facto decision by NDS to select SanToll-Ibertax.

Slovakpass questioned the qualifications of the tender commission and the independence of one of the commission’s consultants and also turned to the European Commission.

“We've argued that the members of the commission that is supposed to evaluate the submitted offers have insufficient qualifications or professional experience with respect to the object of the tender,“ said Peter Newole, Slovakpass’s representative, on October 22, as quoted by the TASR newswire.

Another issue raised was the fact that, according to Newole, the only expert on the subject involved, the commission's consultant, was not independent, but had a close relationship with Siemens, which is the main technical supplier of SanToll.

Slovakpass demanded the creation of a new tender commission.

Kapsch TrafficCom, an Austrian company, said in 2008 that other bidders submitted bids with false information concerning the effectiveness of their toll collection, the SITA newswire wrote on August 12.

The ÚVO however dismissed the objection suggesting that the office did not think the information on the effectiveness of toll collection offered by other bidders was unrealistic, Helena Fialová, the ÚVO spokesperson told SITA.

The opposition party, the Slovak Democratic and Christian Union (SDKÚ), has called on the transport minister and Prime Minister Robert Fico to cancel what they call the “non-transparent tender” and announce a new one.

The SDKÚ argues that the NDS is refusing to publish information about the owners of the companies in the winning consortium. In particular, they have pointed to the company Ibertax, according to the Aktualne.sk website.

The opposition has also called on state officials to publish the names of the people who sat on the selection committee, or acted as technical advisors.

“The whole preparation and the course of the tender show the signs of the winner being picked in advance, moreover for the highest offered price,” former transport minister Pavol Prokopovič told TA3.

His successor denies any failing on the part of the NDS or the state in general.

The Slovak project to set up an electronic toll collection system is unique in the world because, apart from highways, it will also cover a large number of normal roads via satellite toll collection, said SkyToll in a press release.

“This technology is currently not being implemented elsewhere in the world,” said SkyToll.


The system is based on GPS-GSM technology, which should secure maximum flexibility to handle an increase in the volume of cargo transportation and an expanding road network for the next 13 years, according to SkyToll.

The minimum time for building such a system is eight months, Ľubomír Palčák, the director of the Transport Research Institute told The Slovak Spectator in an earlier interview.

Palčák also said he is not surprised that the process was riddled with complications. According to Palčák, the greatest problem of the type of large system that Slovakia wants to build is that the European Union itself has problems defining exact norms and standards, while such systems integrate different sub-systems which are difficult to compare.

Palčák said that in the case of such a large tender, with strong bidders, one has to expect some complications.

He pointed out that toll collection projects have perhaps the fastest return on investment of all infrastructure projects.

The state will basically start paying for the project only after the first vehicle uses the toll system and payments will in fact be covered from the toll income.


Palčák estimated that income from toll collection might reach about €3.98 billion (Sk120 billion) over 13 years.

As for the impact of toll costs on business, a study by the Transport Research Institute suggests that transport companies will feel the greatest impact.

They already say that there is no room for them to bear increasing costs without increasing their prices, Palčák told The Slovak Spectator.

“The impact on the public should not be that great,” said Palčák.

However, what Palčák sees as a great asset of the toll system is that it will harmonise conditions between rail and road transport, since there is currently a much higher fee for using the rail infrastructure than for using the roads.

“Optimists say that the installation of the toll system might move at least 10 percent of the goods to railways,” Palčák concluded.