A SLOVAK winemaker is predicting that the Rhine Riesling grapes harvested from the Mužľa hills in Nové Zámky district in the first week of January this year will make very good ice wine. 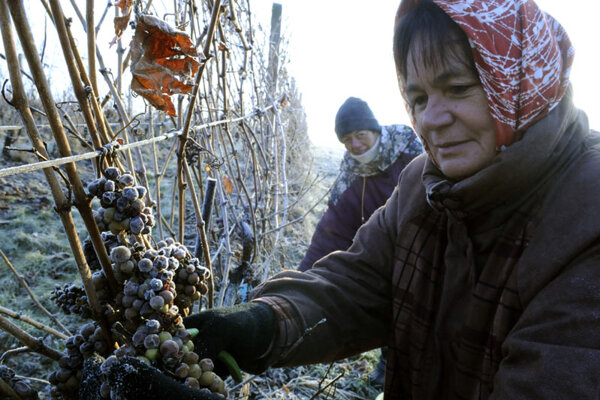 A SLOVAK winemaker is predicting that the Rhine Riesling grapes harvested from the Mužľa hills in Nové Zámky district in the first week of January this year will make very good ice wine.

Its quality should be guaranteed by the grapes’ high sugar content and a high acidity, the SITA newswire was told by winemaker Miroslav Petrech, who has been involved in making ice wine since 1994. The Mužľa harvest yielded about 1,900 kilograms of grapes, from which winemakers expect to make 200 to 250 litres of must.

“In May, when we first try the wine, it will be just a 'nursery child', but in October, it will be 'a grown-up girl': by then we will know the price at which we will sell it,” Petrech told SITA. He expects the price to be around €25 per bottle.

A good quality ice wine is a relatively unusual occurrence for local winemakers. Last year’s grapes were harvested in temperatures of -8°C, however the harvest was unsuccessful, as the saccharinity of the must was low.

In Slovakia, there is little tradition of making ice wine, but Petrech thinks that new things should be tried.

He said that the Mužľa hills are the best wine-growing area in all of the former Czechoslovakia - even better than in the Tokai region (in south-east Slovakia), since Mužľa has warmer weather.

Petrech puts the high quality of the areas’ wines partly down to the local winemakers’ unhurried approach. They needed it for the ice wine harvest, for which they had to wait for three weeks of cold weather: successful ice wine production is entirely dependent on cold conditions.