WHEN MP Daniel Lipšic spoke last month of the "moral debt" the political opposition owed to voters, he claims he did not mean to revive dark suspicions of corruption under the previous Mikuláš Dzurinda government. But in mentioning the alleged bribery of MPs to support the Dzurinda administration in 2005, he achieved just that. 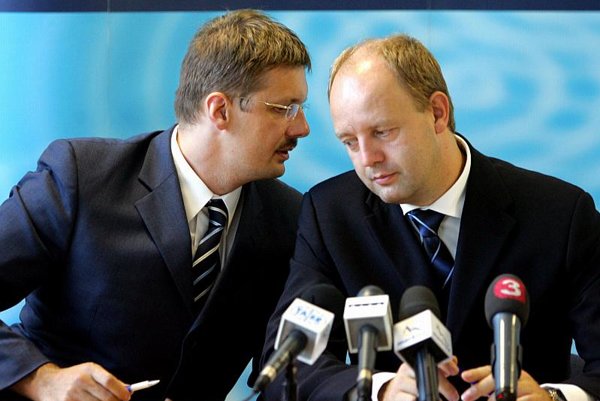 WHEN MP Daniel Lipšic spoke last month of the "moral debt" the political opposition owed to voters, he claims he did not mean to revive dark suspicions of corruption under the previous Mikuláš Dzurinda government. But in mentioning the alleged bribery of MPs to support the Dzurinda administration in 2005, he achieved just that.

In September 2005 parliament was deadlocked after the Mikuláš Dzurinda government had lost its slim majority due to the defection of ANO party chief Pavol Rusko and three of his MPs to the opposition.
But after a few weeks, the impasse was suddenly resolved when opposition MPs Karol Džupa and Eduard Kolesár of the HZDS party crossed the floor to support the government. After signing an agreement with the rump ANO faction under Ľubomír Lintner, they began to vote with the ruling coalition.

One of the enduring questions about that curious month remains why two of the most stalwart members of Vladimír Mečiar's authoritarian HZDS would defect overnight. Dzurinda's explanation - that they were moved by responsibility to the country - satisfied no one. So what was really behind their decision?

Mečiar: Malchárek was behind it

HZDS boss Mečiar still says that Džupa and Kolesár quit his party "with the help of financial groups".

Rusko was even more concrete in naming Penta Investments as a silent coalition partner of the Dzurinda government: "Penta significantly contributed to stabilizing relations within the parliament to the benefit of the ruling coalition."

Following a January 28 press conference by Daniel Lipšic, a former justice minister in the Dzurinda government, at which he mentioned a "moral debt" that the previous administration owed to voters over the episode, Mečiar repeated his charges against Malchárek, then the minister of economy in the Dzurinda cabinet.

"Malchárek told HZDS MP Tibor Cabaj, in a somewhat tipsy state, that they had already bought two of our guys," the HZDS boss told the private TA3 television news channel.

Malchárek declined to comment on Mečiar's allegations. His role in the defection of Džupa and Kolesár and the recovery of the Dzurinda government's majority is impossible to prove, but the fact remains that after he became minister, the influence of Penta over privatisation in general and state-owned energy sector companies in particular increased significantly.

Malchárek's main advisor for privatisation became Ľuboš Ševčík, a man who had spent 10 years in a company with Penta partner Jozef Oravkin, and who is now chairman of the board at Penta-owned Privatbanka.

"It's possible that I recommended Ševčík to him (Malchárek)," Penta partner Jaroslav Haščák said in an interview with The Slovak Spectator.

Another of Malchárek's advisors, Jozef Jurica, sat on the board of the former VSŽ steelworks with Penta representatives until 2005. Malchárek nominated both Jurica and Ševčík to the supervisory board of the Slovenské Elektrárne power utility, where they were in a position to influence public procurement.

Haščák as a role model

Penta's interests in the energy utility, which at the time was just about to be privatised to the Italian company Enel, were various. Haščák was looking for a buyer for the PPC steam-gas energy producer, and was interested in securing an advantageous energy contract for the Penta-owned Slovalco aluminium refiner.

Penta was also interested in privatising the Bratislavská Teplárenska (BAT) heating company. Malchárek nominated to BAT's supervisory board the current rector of Bratislava's Economic University, Rudolf Sivák. Sivák had previously served on the boards of two Penta-owned companies, Ozeta Neo and Sanitas. He resigned his BAT seat when his connection with Penta was reported in the press.

In a recent interview with the Hospodárske Noviny daily, Malchárek said that Haščák was his model "in terms of business, in terms of hard work, education and above-board dealing."

In March 2006, two little-known companies based in Cyprus launched a company in Slovakia called HM Invest. The firm's bank account was at Penta-owned Privatbanka, and the chairman of its board of directors was a former senior policeman named Zoltán Varga. HM Invest has a basic capital of almost €10 million.

In 2007, Malchárek became a shareholder in HM Invest with a deposit of Sk5 million. The company also bought a villa in the exclusive Kramáre area of Bratislava worth Sk26 million, according to company documents stored in the Bratislava business register.

Varga was originally Malchárek's friend and business partner, but in 1998 he was introduced to Haščák. He now provides security for many of Penta's holdings, while his brother is a chaufeur for Oravkin of Penta.

Asked whose money was behind HM Invest, Malchárek refused to answer. Haščák said neither he nor Penta had "anything to do with the company". And Varga said only that "maybe it's my money... I have the firm under my thumb".

While Varga said the villa belonged to HM Invest, workers on the site said it belonged to Malchárek, and that the former minister frequently visited the property to oversee reconstruction work. He is expected to move in soon.