Myths surround the history of the first Slovak State

THE ANNIVERSARY of the founding of the Slovak wartime state is now seen by ultra-right extremist groups as an opportunity to present their beliefs in public. This year marked 70 years since the state was established in 1939. 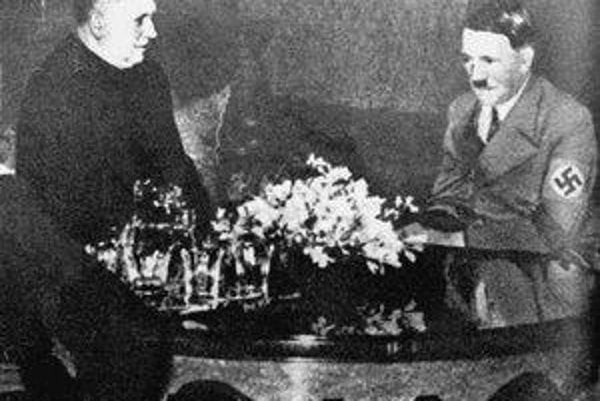 By then, Hitler had resolved to invade and occupy all of the Czech regions of Czechoslovakia, of which Slovakia was then a part. Tiso was summoned to Berlin where he was told that Germany would back a Slovak declaration of independence. The likely alternative was partition of Slovakia between Poland and Hungary. Tiso chose the former and the Slovak National Assembly declared the Slovak state
independent on March 14, 1939.

But the majority of Slovaks did not show much enthusiasm for their newly acquired 'independence', according to Katarína Zavacká, a historian from the Institute of State and Law of the Slovak Academy of Sciences.

“As a matter of fact, the political parties offering autonomy did not have more than 30 percent support and their popularity was falling in the 1930s,” Zavacká told The Slovak Spectator. On March 14, 1939, the representatives were summoned to the parliamentary assembly to declare the Slovak state, they came only to an ordinary session called by the premier and they only found out later about Tiso’s negotiations with Hitler the day before and the fact that they were expected to declare the Slovak state.

“In order that the surprised representatives did not vote against or abstain from the vote, they were made to stand up and sing Hej Slováci [which later became the national anthem of the wartime state of Slovaks],” Zavacká said. “Only afterwards did they make a legend about their enthusiasm for it, to legitimise this anti-constitutional act.”

However, supporters of the wartime Slovak state often use this enthusiasm as an argument in support of Tiso. Another aspect that has been mentioned, for instance by Ján Sokol, the archbishop of Trnava, who has faced criticism for praising the wartime state, is the alleged prosperity of Slovaks in that historical period. According to Zavacká, prosperity in that era is a mere legend rather than historical fact.

“Some Slovaks lived in prosperity, but all the rest had a ration - ticket system, so what kind of prosperity was that?” she said, adding that the majority of citizens had to cope with a lack of goods, hunger and lice. However, censorship applied to all contemporary information and that is why the legend of prosperity has survived to this day, she said.

These myths stem from attempts to legitimise the regime in retrospect. According to Michal Vašečka, the director of the Centre for Research of Ethnicity and Culture, various marginal groups try to legitimise the pre-war authoritarian or wartime totalitarian regimes in most countries of the central European region.

Slovakia, together with Croatia, are both in the peculiar situation of having had their first taste
of independent statehood as pro- Nazi regimes created under the auspices of Hitler's Germany.

“In a country that is deeply rooted in ethnic and primordial self-definition this is a problem for some segments of society and since 1945 they have desperately tried to divide state and regime,” Vašečka told The Slovak Spectator.

But there is no way to make such a division, according to Zavacká,who said that the value of ‘statehood’ depends on the degree of civic rights and freedoms that the state ensures for all its citizens.

“Having a state has no positive or negative meaning as such, that [meaning] is provided by its regime,” she explained.

Slovakia, similar to many other countries of central Europe, has not come to terms with its past and the process of reconciliation is not finished. According to Vašečka, Germany is the only country that has been dealing with that historical period seriously, unlike Slovakia, Croatia,Austria, and even Poland. This is partly a problem of lack of knowledge about that historical era.

According to Zavacká, the subsequent communist rulers did not have any interest in informing the public about the previous Slovak state as there were too many similarities between the two regimes: both established concentration camps for political opponents, both were led by one political party, both indoctrinated the youth and both invited foreign armies into Slovakia. She says that knowledge about the wartime regime is much better now, 20 years after the fall of communism.

“But many supporters of that state know about its undemocratic and bestial features, yet they just don’t see them as a negative – rather the contrary,” Zavacká said.