NOT VERY long ago it was possible to see some businessmen on the streets or in a car bearing large boxes outfitted with earphones. These were the first mobile phones, but heavy to carry and expensive to operate as they were, they enabled their possessors to be accessible by phone when out of reach of a landline. At this pre-mobile time in society, only a few people could imagine that just a few years later a mobile phone would become an everyday necessity for most people and that life without a mobile would be unimaginable. 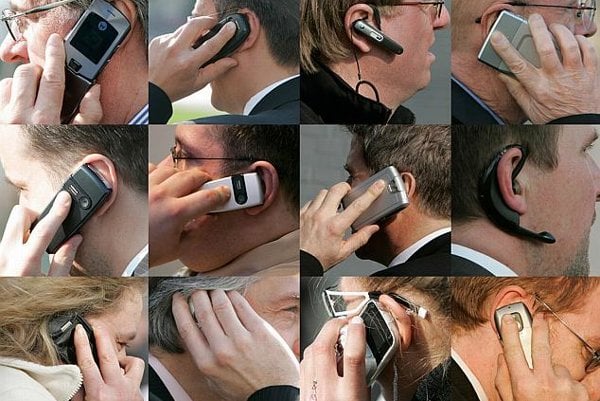 'I can't quite hear you...': The mobile market offers an extensive range of services. (Source: SITA)
Font size:A-|A+  Comments disabled

NOT VERY long ago it was possible to see some businessmen on the streets or in a car bearing large boxes outfitted with earphones. These were the first mobile phones, but heavy to carry and expensive to operate as they were, they enabled their possessors to be accessible by phone when out of reach of a landline. At this pre-mobile time in society, only a few people could imagine that just a few years later a mobile phone would become an everyday necessity for most people and that life without a mobile would be unimaginable.

Now the penetration of mobile services in Slovakia exceeds 100 percent and customers from all age categories – from children to pensioners – use mobile services delivered by Slovakia’s three mobile operators. Their offers are extensive, ranging from mobile telephony, data services and internet access, up to other higher-tech services as mobile phones have morphed into ingenious, multifunctional gadgets.

The history of mobile telephony in Slovakia started in September 1991, when the first mobile call took place via the NMT analogue network operated by EuroTel, Martin Vidan, spokesperson of T-Mobile Slovensko, the successor to EuroTel, told The Slovak Spectator. EuroTel was Slovakia’s exclusive cellular phone system provider, as a joint venture of the then dominant telecoms company, Slovenské Telekomunikácie, and two American companies, Bell Atlantic International and U.S. West International.

The beginnings were difficult as at that time a customer had to pay more than Sk100,000 (the price of some houses in 1991) for a mobile phone, the Hospodárske Noviny daily wrote back in 1996.

In 1996 EuroTel got its first competitor when SlovTel, a French-Slovak concern, which later transformed into GlobTel and then into Orange Slovensko, received a licence to provide digital mobile radio-telephone services using GSM (Global System for Mobile communications).

GlobTel launched its trial GSM operation in November 1996 and EuroTel followed in December of that year.

But Slovakia had to wait until 2006 for its third network operator, Telefónica O2 Slovakia. After it won a tender in August 2006, this member of the international group Telefónica, launched its commercial operation in February 2007. In November 2008 it completed one phase of building its own network in Slovakia and thus fulfilled licence conditions regarding its signal coverage area and population, René Parák, spokesperson of Telefónica O2 Slovakia, told The Slovak Spectator.

At the time of its arrival the penetration of the Slovak mobile market was already quite high, so Telefónica O2 Slovakia has had to fish for new business in the existing customer pools of the two other mobile operators.

O2 says the time-consuming procedure to move a mobile telephone number from one operator to another continues to obstruct its market development. It attracts customers with a transparent price structure and, for now, pre-paid customers are its predominant clientele.

T-Mobile, which is now a 100 percent-owned subsidiary of Slovak Telekom, which is itself controlled by Deutsche Telekom, and Orange Slovensko, controlled by France Télécom, focus primarily on post-paid or subscriber services. According to their results for 2008, the share of subscribers exceeds 60 percent of the customers in both companies. Customers paying monthly invoices are more valuable to mobile operators. They not only spend two to three times more than customers using prepaid cards, but they are also more loyal, the Trend weekly wrote. The latter characteristic may be caused by subscription contracts, usually signed for two years. And on the basis of such contracts, subscribers can buy a mobile phone subsidised by that operator.

The three mobile operators reported a total of 5.467 million active customers as of December 31, 2008, according to SITA. This means that among Slovakia’s population of 5.4 million, the number of active customers increased by 139,000 over the year.

Orange Slovensko kept its leading position with 2.927 million active customers, followed by T-Mobile Slovensko with 2.215 million and the newest entrant, Telefónica O2 Slovakia, with 325,000 active customers. This means that Orange held the biggest mobile market share with 53.5 percent, followed by T-Mobile with 40.5 percent and O2 with 6 percent.

Total revenues of Orange increased by 3.6 percent year-on-year in 2008 to €833 million and T-Mobile reported the same growth rate, reaching total revenues of €591.4 million. Total revenues for Telefónica O2 Slovakia jumped by 138 percent, reaching €49.79 million for 2008, according to the SITA newswire.

Since SIM cards of mobile phones are also used for other purposes, for example, to operate GSM gates, mobile internet, telemetry and other uses, it is impossible to calculate an exact number of actual customers using mobile phones.

GFK Slovakia, a market research company, found in one of its surveys that 86 percent of Slovaks own a mobile phone, while more than one tenth of these users own more than two mobile phones. This comes from an international Mobile Telephony study in central and eastern European countries in 2008 which mapped the latest trends in 17 countries.

Mobile and the economic crisis

The global economic downturn will not bypass the mobile telephony market. While mobile operators are not expecting frontal impacts, side blows from the crisis might be conveyed to mobile operators via their customers who are more directly affected by the crisis.

“We have not registered direct impacts from the world financial crisis for now,” said Vidan of T-Mobile. “Maybe some customers in 2009 will care more about optimising their costs, which may also be reflected in utilisation of some telecommunications services. But we will not cut our investments in new technologies and networks.”

Orange Slovensko is unable to estimate the potential impacts of the crisis, but on the other hand it can control its costs and expenditures.

“Certainly we plan and we will invest only in those places where investment will bring real results,” Richard Fides, spokesperson for Orange Slovensko, told The Slovak Spectator.

Telefónica O2 has been building its network as effectively as possible in order to provide its customers with services at reasonable prices, Parák told The Slovak Spectator.

“O2 is today a healthy, slim and well-functioning firm, which is prepared to fight for each customer also during this time of financial crisis,” said Parák. “O2 regards the crisis as a chance for a change in customer behaviour. The upcoming period of time will bring a faster introduction of European trends into Slovakia. O2 expects increased pressure for understandability and simplicity in telecommunications services, accompanied by a price reduction and introduction of a flat price for calls in all networks in Slovakia.”

O2 also sees the potential for a rise in services which do not require signing of any long-term contracts.

“During this crisis, every customer will think twice about whether, by purchasing a product or a service, they will be bound [to it] in the future,” said Parák.

Perspectives on the mobile market

As the penetration of the market exceeds 100 percent, Orange sees great potential in mobile data services and services provided via its optic network. It sees its mobile 3G internet to be an alternative to fixed access to the internet.

“Fixed services are a significant part of our core business,” said Fides.

T-Mobile believes that mobile broadband internet will play a decisive role with regards to the growth of the market and revenues.

“In this segment we have been monitoring significant annual growth in operations,” said Vidan.
O2 has focused on students and mothers because these are people who can most quickly take up a change, according to Parák.

“Moreover, mothers decide about household budgets and for families with children, they have to have their expenditures under control,” Parák said, explaining O2’s policy.