GROWING tension in Slovak-Hungarian relations, recently heightened by the Slovak parliament’s amendment to the State Language Act and the subsequent Hungarian reaction to it, climaxed on Friday, August 21, when the president of Hungary was barred from entering Slovakia on an unofficial visit to the Slovak town of Komárno. Since then, Slovak and Hungarian politicians have been hurling blame as well as offensive statements at each other across the Danube. 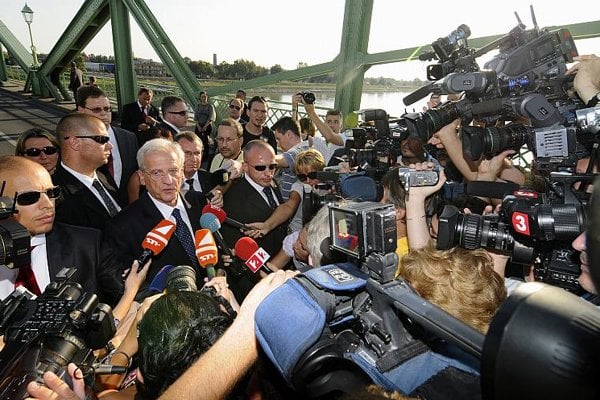 Hungarian president László Sólyom held a press briefing on the bridge between Komárno and Komárom, but did not enter Slovakia. (Source: ČTK)
Font size:A-|A+  Comments disabled

GROWING tension in Slovak-Hungarian relations, recently heightened by the Slovak parliament’s amendment to the State Language Act and the subsequent Hungarian reaction to it, climaxed on Friday, August 21, when the president of Hungary was barred from entering Slovakia on an unofficial visit to the Slovak town of Komárno. Since then, Slovak and Hungarian politicians have been hurling blame as well as offensive statements at each other across the Danube.

Hungarian President László Sólyom was invited to a ceremony to unveil a statue of Hungarian King Stephen I (who reigned from AD 1000-1038, when Slovakia was part of Hungary) in Komárno on August 21. Corresponding high Slovak state officials were not invited. A day before the ceremony, Prime Minister Robert Fico, President Ivan Gašparovič and Speaker of the Parliament Pavol Paška issued a joint written statement saying that Sólyom was not a welcome guest in Slovakia on August 21 for several reasons – ongoing tensions between the two countries because of the new, controversial State Language Act, and the sensitivity of the date: August 21 is the anniversary of the invasion of Czechoslovakia by most Warsaw Pact countries in 1968, including troops from Hungary.

Sólyom, however, did not respond by cancelling his visit to Slovakia so the Slovak Foreign Affairs Ministry then conveyed an official message to Sólyom asking him to disregard the invitation to Komárno and to not enter Slovakia.

President Sólyom said at the press conference that the diplomatic note issued by Slovakia to deny him entry was an unprecedented measure in relations between two allies, Slovakia and Hungary. The note prohibiting Sólyom from entering Slovakia reached him upon arrival at Komárom.

“I'm glad you’re coming from the other side of the bridge where they’re unveiling the statue of Stephen I and you could see for yourself that there is no security risk,” Sólyom told journalists, as quoted by TASR.

Sólyom turned around on the Hungarian part of the bridge and returned to Komárom, accompanied by his entourage.

Péter Balázs, the Hungarian Minister of Foreign Affairs summoned Slovakia's Ambassador to Hungary, Peter Weiss, on August 24 and expressed his “deep written and verbal” disapproval of Slovakia’s action. The minister called the incident “unprecedented and unacceptable”, reads the official statement of the Hungarian diplomat, SITA reported.

Slovak officials insist that the Hungarian president breached several diplomatic conventions and standards of international practice. The spokesperson for Slovakia’s Ministry of Foreign Affairs (MFA), Peter Stano told The Slovak Spectator that these included: during the three days prior to the intended visit Sólyom repeatedly made critical remarks about Slovakia; Slovakia’s MFA learned the details of his programme in Komárno only three days before his visit; the president intended to use this private visit to make a public speech; the Hungarian president did not show any interest in using this symbolic event to meet with counterpart Slovak officials and in that way to send a very positive signal for Slovak-Hungarian relations; and he ignored the plea of Slovak officials to not visit Slovakia on that particular day.

Hungary already announced they will turn to diplomatic levels of the European Union to discuss the action taken by Slovakia. The chairman of the foreign affairs committee of the Hungarian parliament has also initiated an extraordinary session in which the Hungarian foreign affairs minister is expected to take part. However, the Swedish presidency of the EU announced they consider the incident a bilateral conflict and they will not intervene, SITA wrote.

“Slovakia has claimed from the start that the internationalisation of any bilateral problems is inappropriate and useless,” Stano told The Slovak Spectator. “Opening our bilateral conflicts on the European level is counterproductive and harms both countries, since it casts doubts upon their maturity and ability to solve their mutual problems alone.”

Stano added, however, that Slovakia is ready to explain and discuss the situation at international forums.

“Slovakia and Hungary have much in common, there’s a lot of good cooperation, a lot of common projects and our citizens expect that we will cooperate at all levels, including the highest level of prime ministers and presidents,” Stano said.

Political analysts say the recent incident only completes the mosaic of similar events, for instance, the campaign before the presidential elections in Slovakia earlier in 2009, which added to the tension between the two countries.

“The situation resembles some kind of cold war between two countries which, in fact, stand on the same side – as members of the EU and NATO,” political analyst László Öllős told The Slovak Spectator. “This case only adds to that and I’m very sure that more cases will follow.”


Öllős blames the Slovak side for using the ‘Hungarian card’ to score political points before national parliamentary elections due in 2010.

“The Hungarian card was tested before the presidential elections and it will be used again before the parliamentary elections,” he said.

“The event completes the mosaic of negative steps in their bilateral relations, but its calibre far exceeds the previous ones, because here Slovakia denied entry to an allied country’s president,” he told The Slovak Spectator.

Mesežnikov believes that the incident is not only a bilateral problem because by denying entry Slovakia disregarded the basic principles upon which the EU is built. Mesežnikov opined that at some point the EU will have to deal with it.

Slovakia based its denial of entry on directives of the European Parliament and the European Council which allow EU countries to deny cross-border movement to dangerous persons.

According to Balázs, these directives are intended to prevent security risks and not to prevent state representatives from crossing borders, the SITA newswire wrote.

Slovakia argued that Sólyom’s presence could provoke extremists on both sides to rally in Komárno. However, no extremists made public appearances until the day after the incident, when several dozen members of a Hungarian radical political party, Jobbik, partially blocked the bridge between Komárno and Komárom, protesting against Slovakia’s behaviour towards President Sólyom. Some 40 members of Jobbik, including the party’s vice-chairman and member of the European Parliament, Csanád Szegedi, also laid a wreath at the freshly-unveiled statue of King Stephen I on Sunday August 23, the TASR newswire reported.

Mesežnikov said extremists on the Slovak side are focusing on Roma topics at the moment and Hungarian issues do not interest them that much. However, he spoke of a certain asymmetry between the two countries. In Slovakia, parties with nationalist tendencies are in the government.


“[The denial] was an authorised action of the government, which is composed of political parties that systematically play the Hungarian card,” Mesežnikov said.

He said the situation in Hungary is different as the nationalists there do not define themselves against Slovakia only. They use their nationalism for justifying more radical attitudes of both mainstream and extreme parties who use it to gain political capital.

“But unfortunately, our government is also responsible for this, since they gave an opportunity to the Hungarian nationalists to work with this topic,” Mesežnikov said.

Within a week of Sólyom being denied entry, the Slovak Embassy in Budapest experienced what appeared to be an isolated attack. On the evening of August 25 an unknown offender threw bottles filled with a flammable substance, most likely a so-called Molotov cocktail, at the embassy building. The attack caused no significant damage as the bottles did not ignite or explode.

Both Slovak and Hungarian representatives condemned the act, calling it an individual criminal act. The Hungarian police have video recordings from security cameras which show that the attacker acted alone and they are now seeking to identify the perpetrator, SITA reported.

The power of symbols

The new statue of King Stephen I in Komárno is not a mere prop in the simmering dispute. Stephen I, who died in 1038 and was later proclaimed a saint by the Catholic Church, was the first king of Hungary which at that time also included present-day Slovakia and was known as a multicultural country.

But in the wake of the diplomatic war between Slovakia and Hungary, Prime Minister Robert Fico said that aggressive Magyarisation was undertaken during the rule of Stephen I.

“So nobody should pretend that Stephen I was some Slovak king,” Fico said, as quoted by the TASR newswire.

Öllős believes this statement shows that Stephen is a very unpleasant symbol for Fico.

“The attempt to prevent the Hungarian president from making a speech in Komárno was also an attempt to prevent him from mentioning Stephen’s well-known message to the Slovak public,” which Öllős said is: "A state with only one language and one set of traditions is too weak ."