SLOVAKIA’s men’s ice hockey team beat Sweden 4-3 in a thrilling contest to advance to the medal round of competition at the Winter Olympics in Vancouver on February 24. 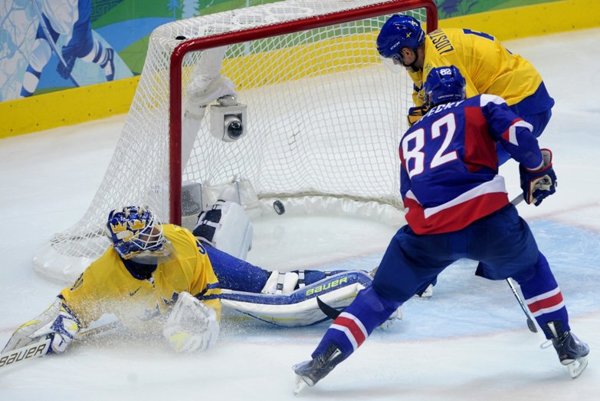 SLOVAKIA’s men’s ice hockey team beat Sweden 4-3 in a thrilling contest to advance to the medal round of competition at the Winter Olympics in Vancouver on February 24.

Even if Slovakia lost to Canada in its semi-final match scheduled for Friday and had to settle for a bronze medal tilt on Saturday, it would still be the country’s greatest triumph in Olympic competition since independence in 1993. Slovakia placed fifth in 2006 in Torino and sixth in 1994 in Lillehammer, and in between finished well down the ladder. In Vancouver the team was seeded seventh against Sweden’s number two ranking.

Despite twice squandering two-goal leads and being heavily outshot 29-14 by the Swedes, Slovakia combined strong defensive play and goals from four different shooters to defeat the defending Olympic champions.

Tomáš Kopecký of the Chicago Blackhawks scored the winner with 11 minutes remaining in the third period. “It was an incredible feeling, something every hockey player should experience,” he said, while dedicating the goal to injured teammate Ľuboš Bartečko.

Bartečko suffered a concussion and a deep cut to the back of his head in Slovakia’s previous match against Norway when he was elbowed in the face by Norwegian tough guy Olle Kristian Tollefsen. Tollefsen received a five-minute major penalty and was ejected. Bartečko, bleeding heavily, was carried from the ice on a stretcher.

“The guys are very close, and an injury that ugly to a player who has done a lot for this team was a big motivator,” said Slovak coach Ján Filc.

Another source of motivation for the Slovaks was the age of many of its key players, including Jozef Stümpel and Žigmund Pálffy (both 37), and Pavol Demitra and Miro Šatan (both 35).

“For players like Pálffy, Demitra, and Stümpel, this could be their last Olympics, and when you see how much they want to win, it really gives you a boost,” said Kopecký, who is 28.

Slovakia began the competition with a frustrating 3-1 loss to the Czechs, but recovered to beat favoured Russia 2-1 and stomp Latvia 6-0. A tense win in the elimination round by a score of 4-3 over Norway put the Slovaks into their quarterfinal match against Sweden.

The Czechs, meanwhile, exited the competition after a 2-0 knockout defeat to Finland, while Russia went home following a 7-3 shellacking by Canada.

The success of the Slovak team attracted a fanatical national following at home, reminiscent of the country’s run for the gold medal at the 2002 World Championships in Sweden. If there has been any damper on enthusiasm it has been about the time at which the games have been played, anywhere from midnight to six in the morning Slovak time.

“This all feels just like winning the gold in Sweden,” said Filc. “I know we have been stealing people’s sleep, but it has meant a lot to us to have their support.”

Their Vancouver results are one of the top achievements of the current generation of Slovak players, many of whom play leading roles on professional teams in North America’s professional league. However, both fans and the Slovak hockey establishment now worry about their team’s future once the older players retire, as there is no strong younger generation coming up through the ranks to replace them.

Kopecký said the team had the experience not to lose control of its emotions. “Before the tournament began we agreed that we wouldn’t talk about medals. We said we would just take it one game at a time. But then Miro Šatan added an important thought – he said we shouldn’t be afraid to dream.”