Traditions of a Slovak Easter

THE MEANING of Easter is to commemorate the suffering and death of Jesus Christ and to celebrate his resurrection, the Roman Catholic Archbishop of Bratislava, Stanislav Zvolenský, told the TASR newswire on Good Friday. For Evangelical Christians, Good Friday is a also an important holiday which provides a vivid picture of the nadir of the suffering of Jesus, said the general bishop of the Evangelical Church in Slovakia, Miloš Klátik. 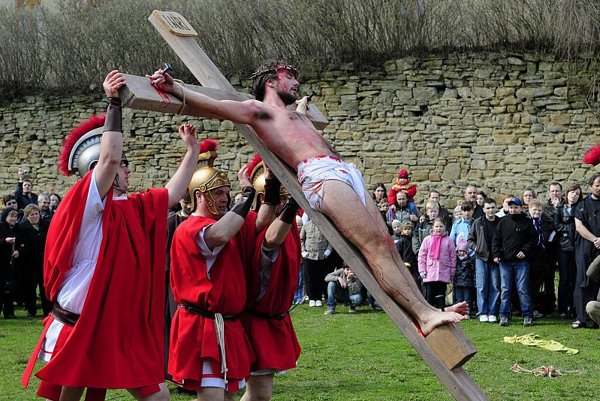 On Easter (White) Saturday, in churches across Slovakia, celebrations begin after dusk. Holy liturgies begin with the blessing of fire and lighting the Easter Paschal candle which symbolises the resurrection of Jesus. This is followed by a reading from the Old Testament accompanied by organ music and bells. At the end of the masses, the celebration of the resurrection begins. This recommences on Easter Sunday. A very important clerical ceremony is the untying of the bell and its first ringing.

Fire also has a significant role in Slovak traditions. An open fire was set in all households and Easter dishes were prepared on it. This custom signified the need for new vitality at the beginning of the agricultural year. Fire also had integral function vis-a-vis clerical ceremonies known as Judas’ burning or bonfire on White Saturday. A fire was lit in front of the church and was sanctified by the priest. The burnt coal and ash were said to have magical power so people placed these with flax and hemp on their fields or put them in their house attics to protect against fires.

During White Saturday there were several other customs connected with agriculture, health and protection of one’s home. Regarding food, White Saturday was a special day as the Easter Sunday meals – ham, eggs, lamb and cakes – began to be prepared. Fried rolls with poppy seeds or sheep’s cheese and sauerkraut soup were traditionally eaten on White Saturday. Use of the adjective white – the symbol of purity and innocence – comes from a Bible story in which the body of Jesus was wrapped in a white linen burial cloth.

Easter Sunday is considered the culmination of the entire Easter week and its holidays in Slovakia. It is the end of the period of Lent, 40 days observed as a time of penance and fasting which commemorate Jesus’s fasting in the desert. Easter Sunday – the day of Christ's resurrection – is an opportunity to bless Easter meals and a time for ceremonial fare. When returning from church in the morning, people also often walked around their house in order to ensure a good harvest. Before Easter dinner, an egg was also divided among all family members to remind them not to forget each other and to stick together. Another folk tradition was rubbing cattle with the lard from Easter dinner in order to protect them from snakebites.

Easter Monday is also connected with the custom of bathing or soaking girls with water and ‘whipping’ them with a willow whip. The symbols of this day are water, the colour green and decorated eggs which are exchanged in return for the ‘whipping’.

The woven whip, or korbáč, is linked with a faith in the vital force of fertility and the soakings are said to ensure health and beauty. These customs have changed over the years and were quite different before the 1950s. Then, young adults received raw eggs which were seen as a symbol of fertility. Younger boys were allowed to soak and whip the younger girls before noon and in exchange they received sweets.