ONE OF the co-founders of Prime Minister Robert Fico’s Smer party is claiming that secret deals were signed by the party with off-the-books sponsors ahead of the 2002 parliamentary election to guarantee these individuals state posts and other benefits in return for multi-million crown gifts. 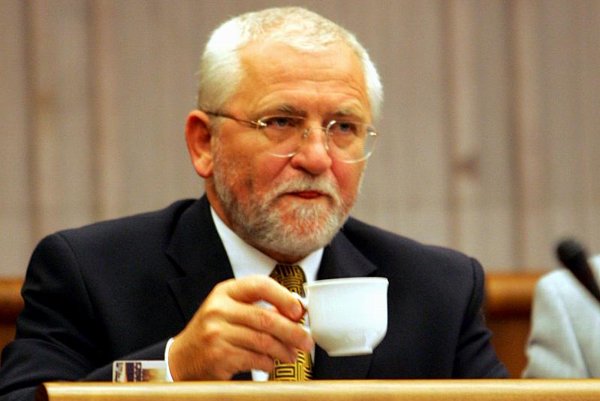 Bohumil Hanzel, pictured when he was a Smer MP (Source: SITA)
Font size:A-|A+

ONE OF the co-founders of Prime Minister Robert Fico’s Smer party is claiming that secret deals were signed by the party with off-the-books sponsors ahead of the 2002 parliamentary election to guarantee these individuals state posts and other benefits in return for multi-million crown gifts.

Bohumil Hanzel, who founded Smer with Fico in 1999, said in an interview with the Sme daily that the prime minister also boasted of how he himself had reeled in monies for the party’s first national election campaign. When asked by Sme, whether it was Sk100 million, Hanzel responded that the amount was not far from the mentioned sum.

“When I met Fico for the first time on September 17, 1999, he was looking for sponsors who could support the party,” Hanzel said. At a later meeting on August 16, 2001 “he (Fico) told me that it was normal for sponsors who had given the party money to demand state contracts in the event we win elections. Moreover, Fico even raised money for the party himself.”

Asked who had donated the money, and whether the sum had been around Sk100 million, Hanzel said “it was a major amount, he (Fico) told me the name and the sum, and if necessary I will provide the details in court. But you are not far from the actual figure”.

Calling himself “a huge pedant”, Hanzel says he kept detailed records of each meeting and conversation with Fico and that he is ready to back up his claims in front of a judge.

Hanzel claims the party spent Sk284 million on its aggressive 2002 campaign, far in excess of the Sk10.6 million Smer reported in its official accounting. Apart from funds Fico himself raised, Hanzel said the balance came from sponsors recruited by him and Fedor Flašík, Smer's 2002 campaign chairman.

The party finished a disappointing third in the September 2002 elections with 13-percent support, and spent four years in opposition before its 2006 win.

Hanzel said he had recruited three major sponsors from 2000 to 2002, who together gave Smer Sk60 million (€2 million at current exchange rates) in undisclosed funds. One of them was Ľubomír Blaško, an energy sector entrepreneur who died in 2004.

In the event that Smer formed the government after 2002, Blaško was also to be allowed to nominate someone to the post of deputy minister in a ministry that dealt with the economy, as well as to three spots on the boards of state energy or railways companies.

'Fico knew about every crown'

“At the beginning the party used parallel financing and Fico knew all about it,” Hanzel said. “Flašík took care of one [fundraising] drive; I took care of the other. Fico later told me to turn everything over to Flašík.”

The party treasurer in those years was the mother of Monika Beňová, Flašík’s wife, now a member of the European parliament for Smer.

“It was all under Fico’s supervision, he knew about every crown that went into the party’s coffers,” Hanzel said. “He always insisted that only what was absolutely necessary should be recorded in the party’s official books.”

Hanzel also claims that Fico had a notarised contract drawn up with the party’s most influential sponsor.

“I saw a copy of the contract; it is very similar to the one between Flašík and Blaško. It was an agreement between Fico and a group of five sponsors who represented a very influential entrepreneur. In the contract these people are identified as sympathisers one through five. The contract has five pages. It involved a lot of money and concrete spots on the party’s list of candidates [for election to parliament],” Hanzel said.

Deal with the devil

On May 17, after publication of the Blaško contract, Fico called Hanzel a “liar and a political failure”. Hanzel said the prime minister had no choice but to disown him, given that elections are only four weeks away.

“If he admitted it there would be a huge political scandal,” he said.

“Fico once said he would do anything to become prime minister. With this step he signed a pact with the devil.”

According to the alleged documents published on May 17 by Sme, Blaško signed a contract with Flašík in April 2002 covering the donation.

In return for the money, Blaško was to be allowed to nominate three people to Smer’s steering board and to its shadow cabinet, with those nominees also occupying spots in the top 20 of Smer's candidate list for the election.