MORE than 38,000 visitors, 400 international guests and 175 journalists: these are the outstanding figures that marked the 18th – and so far most successful – edition of Slovakia’s second largest film event, Art Film Fest, held in Trenčín and Trenčianske Teplice between June 18 and 26. 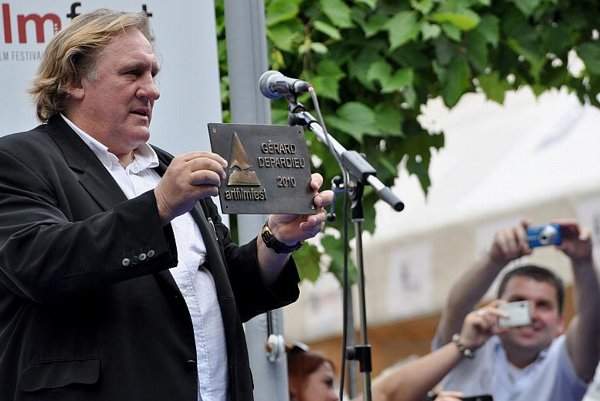 Gérard Depardieu was the main star of the festival. (Source: ČTK)
Font size:A-|A+

MORE than 38,000 visitors, 400 international guests and 175 journalists: these are the outstanding figures that marked the 18th – and so far most successful – edition of Slovakia’s second largest film event, Art Film Fest, held in Trenčín and Trenčianske Teplice between June 18 and 26.

Reasons that might explain the record-breaking attendance were many: a rich programme of 240 movies divided into 16 different sections, attractive side events such as concerts and workshops, and an all-star guest list topped by French star Gérard Depardieu.

But while people were gathering in cinema halls or sipping champagne at evening receptions, the organisers were busy ensuring that everything ran smoothly. Once the last curtain fell and all prizes were awarded, The Slovak Spectator interviewed Peter Nágel, Art Film Fest’s director, to better comprehend the challenges of organising a film festival of its breadth.

The Slovak Spectator (TSS): Was the 18th Art Film Fest different from the preceding editions?

This year was certainly the most successful in terms of both attendance and selection, but as for the general strategy, we tried not to change it in a very significant way. In the past, Art Film Fest used to be completely different every year, and at a certain point, we started to lose fans. Now we know that if we offer people a pleasant atmosphere and an excellent choice of films, they will come again. The most important thing for a festival is to have its own clear vision, one which attracts the widest audience possible. Only then can it aspire to be unique and distinct.

TSS: What are the crucial elements for drawing, as you say, ‘the widest audience possible’?

The challenge is to build up a programme that has something for people of all interests: to screen long-awaited works by established film directors as well as debuts by rising talents; to introduce film production coming from lesser-known regions; not to forget the classics and milestones of the world’s cinematography; to systematically present filmmakers through exclusive profile sections; to support the development of local filmmaking through the presentation of new movies as well as panel discussions and forums; and, from time to time, to surprise with a little bonus, like the section of films on football that we brought this year as the festival coincided with the World Cup.

TSS: For 10 years prior to your current position, you worked as the programme director at the Bratislava International Film Festival, which is larger than Art Film Fest in spite of being younger. Is there competition between the two events?

These two events are too different to be in any competition whatsoever. The Bratislava festival has always been a typical ‘metropolitan’ event, like the ones in Berlin, Rotterdam or Warsaw. This of course implies many advantages, notably good access to a large audience thanks to a strategic geographical position. On the other hand, Bratislava lacks the atmosphere of a little town, all the more so since her festival is held in a multiplex cinema. As a film lover, I am very pleased that Slovakia has as many as four important film festivals: apart from the ones in Bratislava and Trenčín, there is Cinematik held in the town of Piešťany and Febiofest [touring the whole country]. As long as each festival has its own coherent strategy and niche, it cannot but be positive. The world’s film production is so varied that a single festival could never possibly cover it all.

TSS: Most of the filmmakers coming to Trenčín and Trenčianske Teplice have probably attended dozens of other film festivals all around the world. What has been their feedback on Art Film Fest’s organisation?

Though Art Film Fest has already existed for 18 years, there are still many film professionals who know only very little about it. But once they arrive, they are usually very surprised, if not astonished, by the relaxed atmosphere of the event on one hand and by the team’s professional approach on the other hand. We sometimes even find their words of praise exaggerated, which is perhaps because we cannot free ourselves from our – too critical – insider’s view.

TSS: The festival has just finished and you have already started preparing the next edition. What are your plans for the future of Art Film Fest?

For now, I am not over-ambitious. The figures confirm that we have chosen the right path, so our aim should logically be not to disappoint our fans. One thing that we ought to improve, though, is the number and condition of cinema halls, especially in Trenčianske Teplice, as well as the accommodation, restaurant and relaxation facilities, which are still not sufficient. This, of course, requires better communication with the local authorities. But this has only been my second year at Art Film Fest, so I am patient and confident.