THE FOUR partners in Slovakia’s newly-created centre-right coalition wasted no time when it came to thrashing out an inter-party deal which came to fruition on July 6. They began working towards an agreement almost immediately after the election results emerged on the night of June 12. Talks continued at a fast clip despite several disagreements and a Coalition Treaty was formally signed less than a month after the election. 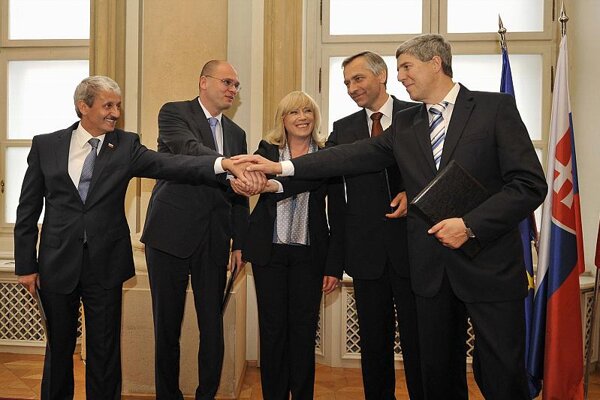 THE FOUR partners in Slovakia’s newly-created centre-right coalition wasted no time when it came to thrashing out an inter-party deal which came to fruition on July 6. They began working towards an agreement almost immediately after the election results emerged on the night of June 12. Talks continued at a fast clip despite several disagreements and a Coalition Treaty was formally signed less than a month after the election.

The heads of the four coalition parties – Mikuláš Dzurinda of the Slovak Democratic and Christian Union (SDKÚ), Richard Sulík of Freedom and Solidarity (SaS), Ján Figeľ of the Christian Democratic Movement (KDH) and Béla Bugár of Most-Híd, as well as Prime Minister-designate Iveta Radičová (SDKÚ) – signed the treaty, which sets out the terms of their cooperation in the coalition, at Bratislava’s Primate’s Palace on the evening of July 6.

The treaty comes into force on the same day that the various government and constitutional posts are filled, and lasts until 30 days before the next parliamentary election. The document states the division of executive and parliamentary positions among the coalition partners. It also establishes a right of veto: the coalition will adopt fundamental decisions in the government and parliament only after mutual agreement among all coalition partners at the Coalition Council, which will meet twice a month and be composed of three representatives from each coalition party. Each party will have one vote in the council and decisions must be adopted by majority vote.

“The citizens of this country will be able to be proud of their representatives, and I believe that also the Lord God will help us,” Iveta Radičová said after signing the treaty, as quoted by the Sme daily. She also said there would be zero tolerance of ministerial wrongdoing, and that ministers would be dismissed if well-grounded suspicions emerge.

Although the coalition parties reached agreement relatively quickly, there were moments during the talks that suggested the process was not as smooth as they might have wanted it to appear.

One issue that the four centre-right parties had to address was what job to give Ján Figeľ, the Christian Democrat leader and a former EU commissioner. Early rumours voiced in the media suggested he might get the post of the parliamentary speaker, the second most senior state post after the president. The media reported a struggle between the KDH and SaS over the job, and over that of economy minister.

SaS ended up with both of the posts, with Figeľ instead getting a specially tailored ministerial position: transport minister, but with souped-up powers. The Transport Ministry, just like the Economy Ministry, controls several other organisations and companies in which state is a shareholder.

In the new cabinet, the Transport Ministry will take over some of the agenda of the now-defunct Construction Ministry. As such, it will coordinate the drawing of European funds for regional development, while the Government Office headed by Radičová will have the right to control and evaluate the funds drawn.

Political analyst Grigorij Mesežnikov said in an interview with The Slovak Spectator that the creation of this ‘superministry’, as the media labelled it, was mainly motivated by political interests: the KDH chairman needed to have ‘an appropriate position’, and the other parties decided to boost the powers of his job accordingly.

“But it should be noted that the previous government destroyed the competencies of some ministries and thus made it easier for the incoming ruling coalition to solve problems that arose from the fact that the parties had somewhat differing priorities,” Mesežnikov told The Slovak Spectator.

Mesežnikov saw this as a positive step.

“Unlike in the case of the superministry for KDH, here it was more about the real situation with national minorities in the country,” he opined. “Not only the prestige of the party, but also real powers for the post.”

He also sees the upgraded powers as compensation for the fact that the three ‘Slovak’ coalition partners – Most-Híd partly represents Hungarian speakers – did not agree to pass a law on the status of national minorities as part of the government’s programme statement.

“Most-Híd had the right to [nominate] three cabinet members, and in this situation it was a good solution to empower the deputy prime minister,” Mesežnikov said. “In my opinion it is a chance for the national minorities to improve their standing, particularly in those areas to which the new competencies relate: culture and education.”

Štefan Šarkőzy from the Institute for Roma Public Policy told The Slovak Spectator that he welcomes a stronger deputy prime minister for national minorities.

“The post of the deputy prime minster was until now representative rather than executive,” Šarkőzy said, adding that the important thing for the moment is to change the law so that the deputy prime minister's post gets its new powers and associated funding as soon as possible.

The signing of the Coalition Treaty put into the spotlight relations between SDKÚ chairman Mikuláš Dzurinda, who will also become foreign minister, and Prime Minister-designate Iveta Radičová, who is the SDKÚ’s deputy chairman. While in cabinet Radičová is Dzurinda’s superior, within their party and the coalition their seniority is reversed.

Although unusual, the situation is not completely new to Slovakia, as similar relations previously existed between Dzurinda and then-KDH chairman Ján Čarnogurský after the 1998 election.

Mesežnikov said he doesn’t consider such relations a potentially fatal flaw or even a weakness for the government, adding that everything will depend on how relations within the SDKÚ are maintained.

“If the situation is normal within SDKÚ, i.e. without rivalry, it should be alright,” Mesežnikov said, adding that Radičová has repeatedly suggested she will not attack Dzurinda’s position in the party. “Obviously, complications within the party can never be completely ruled out, but during the talks relations seemed to be good and correct.”

Her consent means that new head of the ÚVO will therefore be Fico-nominee Roman Šipoš.


Radičová also confirmed that the new opposition will control exactly the same posts as the centre-right opposition did during the previous term.