GLOBETROTTING students and researchers can nowadays enjoy a seemingly endless list of different grants and scholarships; however, those coming from or wishing to study within the Visegrad region have an extra ace in the hole since V4 countries have recently been particularly eager to enhance their ties with the rest of Europe by encouraging young people to leave the comfort zone of their homes and get a taste of life abroad. 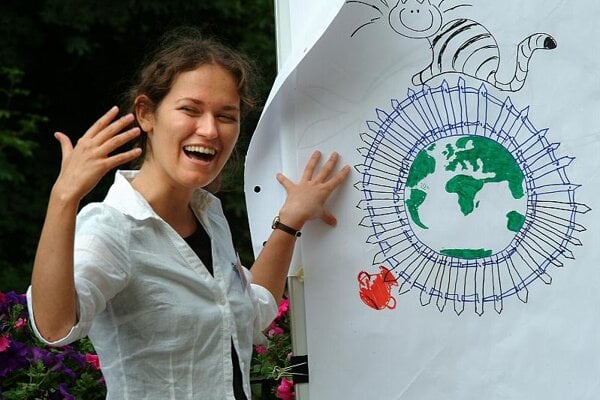 GLOBETROTTING students and researchers can nowadays enjoy a seemingly endless list of different grants and scholarships; however, those coming from or wishing to study within the Visegrad region have an extra ace in the hole since V4 countries have recently been particularly eager to enhance their ties with the rest of Europe by encouraging young people to leave the comfort zone of their homes and get a taste of life abroad.

Among the principal institutions providing grant support for students is the International Visegrad Fund (IVF), founded in 2000 by the Visegrad Group governments, which make equal contributions to the common annual budget.

As part of its numerous activities, the International Visegrad Fund (IVF) awards Master’s and post-graduate scholarships to selected students from the V4 region or one of 13 countries in eastern Europe, the western Balkans and south Caucasus.

Jiří Sýkora, the IVF’s PR director, explained that one of the principal objectives of the Visegrad Scholarship Programme is to make the V4 region a liaison between the EU and countries with fewer funding opportunities.

“While EU citizens have access to hundreds of travel and study grants, the situation is considerably less favourable in the east and south,” he told The Slovak Spectator. “We therefore endeavour to support student mobility in these zones as well as strengthen the ties between the Visegrad Group and non-EU countries.”

With this idea in mind, the IVF offers funding within three separate schemes: ‘In-Coming Scholarships’, meant for non-EU nationals wishing to pursue their studies in Hungary, Poland, Slovakia or the Czech Republic; ‘Out-Going Scholarships’, suitable for V4 citizens who plan to study outside the V4; and ‘Intra-Visegrad Scholarships’ for mobility within the V4 region.

A total of 984 scholarships amounting to €6.9 million have been distributed since the launch of the programme in 2003. In 2011, an estimated 400 semesters will be covered by grants thanks to a budget of €1,448,000, which makes up almost one-quarter of the IVF’s annual budget.

This is a remarkable increase compared with the first year of the programme, when only around €250,000 was awarded to scholars.

The expanding budget goes hand in hand with the growing interest in the IVF’s scholarship scheme. Its statistics show that while at the beginning, one in 2-3 applicants received a scholarship, today, with demand increasing every year, only one in 4-5 applicants is successful.

According to Sýkora, the IVF’s scholarship programme has one important advantage when compared, for example, with the highly popular Erasmus mobility scheme: that of being better suited to scholars’ needs.

“We have no such thing as a network of partner institutions, which means that students can choose any accredited university or research centre they please, including private entities,” he stated. “So our scholars have much more responsibility, as they have to find their host institutions themselves, but, at the same time, they have much more freedom.”

No fear of ‘brain drain’

Though it might not seem obvious at first sight, the IVF does not support mobility so that people can leave their country and start a new life overseas. On the contrary, the ultimate aim is to enable young people to gain new experiences and to build competences they can use in their home countries after returning from abroad.

As Sýkora remarked, there is no need to fear ‘brain drain’: the IVF tries not to lose sight of its alumni and figures have clearly confirmed that the latter indeed tend to pursue their careers at home rather than elsewhere.

Such was the case of Bogdan Kotyk, a Ukrainian who obtained an IVF scholarship for a Master’s course in European studies at Comenius University in Bratislava, from which he graduated with a thesis on European cross-border cooperation.

“After graduation I moved back to Kiev, where I enrolled in the reserve of the Ministry of Foreign Affairs and started working for an international company,” he told The Slovak Spectator. “I am sincerely happy to be home and use my knowledge and skills in practice to help people build a better life.”

Kotyk, who had never been to Slovakia before, appreciated both Bratislava’s lively student life and the professional experience he gained.

“The past two years were very important and productive for me; I certainly have broadened my horizons,” he said. “The on-campus international atmosphere gave me many new friends and brought me closer to Slovak culture, its language and people. At the same time, it was very interesting for me to witness the changes that occurred in the country after Slovakia joined the eurozone.”

Martin Kusý from Slovakia, another IVF alumnus, also returned back to his homeland after completing part of his studies in nanotechnology at the Silesian University of Technology in Gliwice, Poland.

The reason why he chose to study at this particular school was most importantly its “excellent technological equipment”.

“Another reason was that I had the opportunity to be responsible for an entire research project from start to finish – a project that was very much closer to industry than academia,” Kusý stated.

As a teacher at the Slovak University of Technology in Trnava, Kusý is currently working on introducing his own device for the preparation of nanocomposites into industrial production. He continues co-operating with Gliwice University, interestingly, on inviting Polish students for excursions to the Trnava laboratories.

Those preferring to travel abroad for shorter periods of time may be interested in another initiative, the annual Visegrad Summer School (VSS), organised by the Villa Decius Association in the Polish town of Krakow since 2002.

Every year, several dozen students from the V4 region and neighbouring countries are selected to take part in this two-week educational programme consisting of lectures, panel discussions and seminars on issues and challenges relevant to the Visegrad Group region, the EU and the countries of central and eastern Europe.

The line-up of lecturers traditionally includes some of the region’s most noted journalists, political scientists and experts.

As for topics regularly dealt with at the VSS, these usually reflect the Villa Decius’ main concerns, said Anna Kowalska, VSS co-ordinator.

Among them is the lack of a central European identity in the younger generation or the V4 leaders’ general tendency to neglect cooperation with neighbouring countries and to rather focus on western European partners instead.

“I have noticed that in the first days of the workshop, most applicants tend to be more interested in those parts of the programme that deal with the European or even trans-Atlantic perspective,” she told The Slovak Spectator. “By the end of the event, however, what they indicate as the main benefits from the school is an awareness of the role of central European countries, the understanding of the importance of regional cooperation, the consciousness of being central European as a part of one’s identity, the overcoming of stereotypes and the networking experience.”

While the mission of the workshop remains the same, its structure changes from one year to the next, as the VSS team keeps introducing new elements into the programme.

“It would be easy to copy-and-paste the existing schedule for a new group,” Kowalska explained, “but the international situation is so dynamic that we necessarily have to adjust the programme if we want to tackle the most topical and burning issues.”

As Kowalska added, the upcoming edition will be even more different from the preceding ones as the VSS will celebrate its 10th birthday in 2011.

“We will invite our alumni to come and share their experiences with us,” she said. “Many of them have finished their studies and are now working as diplomats, entrepreneurs, academics, journalists, lawyers, NGO leaders, and so on. So we plan to organise more working groups than lectures this time, to give them space for discussing and renewing contacts. And it is they who will suggest topics for this special edition.”

In the meantime, interested candidates should start brushing up their CVs, Kowalska concluded: the competition is so tight that more than 300 applications for the annual VSS are rejected every year.