SCULPTURES continue to demonstrate their power in Slovakia. After the equestrian statue of Svätopluk in front of Bratislava Castle divided society a year ago, a similar situation, though on a smaller scale, has now occurred in Slovakia’s second city, Košice, where a bust of a controversial interwar politician has laid bare the division between Slovaks and Hungarians – and not only between locals in Košice, but also among historians and politicians. 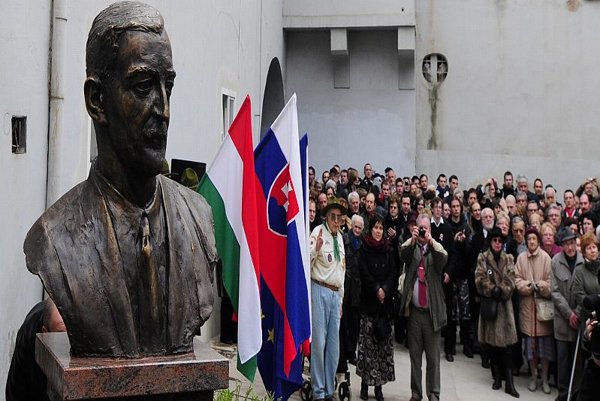 SCULPTURES continue to demonstrate their power in Slovakia. After the equestrian statue of Svätopluk in front of Bratislava Castle divided society a year ago, a similar situation, though on a smaller scale, has now occurred in Slovakia’s second city, Košice, where a bust of a controversial interwar politician has laid bare the division between Slovaks and Hungarians – and not only between locals in Košice, but also among historians and politicians.

An argument that ended in a brawl marked the ceremonial unveiling of the bust of János Esterházy, a local ethnic Hungarian politician active mainly in the 1930s, at a private lot on the main street of the city. The unveiling was organised by the Košice Civic Club on March 14, which is the anniversary of the emergence of the Nazi-allied 1st Slovak Republic in 1939. A few ethnic Slovak Košice inhabitants turned out to protest against the bust.

Peter Kalmus, a local artist who was active in the November 1989 revolution, presented what he called a peaceful protest. After the bust was unveiled, he attempted to cover it with toilet paper but was stopped by two young men who attacked him and threw him to the ground. The police detained the pair and later accused them of promoting extremism based on the right-wing extremist symbols they were reported to have been wearing.

Count János Esterházy was an ethnic Hungarian politician in interwar Czechoslovakia. He served as a member of the Czechoslovak parliament, and later, after Slovakia broke away from Czechoslovakia, he sat in the Slovak parliament. Historical facts about his personality have been blurred by the divergent portrayal of his role by Slovaks and Hungarians: while the former have tended to think of him as a traitor, the latter have instead tended to regard him as something of a hero.

Historians highlight his attitude in the vote on the so-called deportation law, which the Slovak parliament passed in May 1942 to permit the deportation of the country’s Jewish citizens to Nazi concentration camps. Esterházy was the only MP not to vote in favour of the law, arguing that he could not support a law which granted the right to the majority to expatriate a minority. His stance won him heavy criticism from the Slovak press at the time.

After the war, Esterházy was convicted by a Soviet court, and later also by a court in communist Czechoslovakia. The Czechoslovak court first sentenced him to death, later commuting that to life imprisonment. Esterházy died in a prison hospital in 1957.

Opinions on Esterházy are divided even within the Slovak community, as well as within the Hungarian community. Most Slovak historians claim he was a traitor to the Czechoslovak state, though some say that this argument lacks historical foundation.

“János Esterházy, as a minority politician, was continuously trying to break up the Czechoslovak state and its democratic regime,” the Historical Institute of the Slovak Academy of Sciences (SAV) wrote in a statement about Esterházy, adding that in pursuit of that aim, Esterházy secretly collaborated with Hungary as well as with Nazi Germany.

Historian Milan Zemko from SAV’s Historical Institute said that Esterházy took an active part in the preparation of the Vienna Arbitration, which stripped Czechoslovakia of its eastern and some southern parts, including the city of Košice, and handed them to Hungary.

“Slovaks can hardly see this in a positive light,” Zemko told The Slovak Spectator. “Hungarians, however, see it as a contribution to the re-unification of magyarság, the Hungarian community in the Carpathian Basin, and thus as positive for the Hungarian nation.”

István Kollai, a historian and director of the Hungarian Cultural Institute in Bratislava, stressed that Hungarians who found themselves living in Czechoslovakia after the Trianon Treaty had determined the borders of the new post-Austro-Hungary nation-states were not happy with their position and, although most of them did not support the potential change of borders actively and were not against Czechoslovak statehood, they certainly welcomed the change of borders which followed the Vienna Arbitration.

“Hungarians tried to accept their actual situation but it’s true that they were happy to see the kind of changes that were happening in their favour,” Kollai told The Slovak Spectator, adding that this is exactly where János Esterházy serves as an example which could help Slovaks to understand the position of Hungarians in Czechoslovakia at that time.

“He was not a war criminal,” Kollai said, explaining that a war criminal is someone who violates universal human rights, which in his view Esterházy did not. Esterházy opposed the Czechoslovak state-building process and most Slovak nation-building ideas too, but although Slovak and Czech state and nation-building ambitions were legitimate, opposing them does not equate to opposing universal human rights, Kollai said.

The debate about Esterházy, however, covers more controversial territory. He was a representative of the Nazi-allied Slovak state and a self-proclaimed anti-Semite, but this was to some extent balanced by his clear opposition to the 1942 deportation law and the evidence of Jews whom he saved by helping them to escape Slovakia.

Historians from SAV say that despite his vote on the deportation law, he had supported all the previous anti-Jewish laws in parliament and himself stated that he was “always on the anti-Jewish side since childhood and will always remain there”.

“He declared himself an anti-Semite, but that doesn’t mean he completely identified with the intentions and policies of Adolf Hitler,” Zemko said. “More likely, he hoped that Hitler’s revisionist and expansionist politics will be useful in favour of Hungarian revisionism too.”

Claims of anti-Semitism can burden historical personalities of that time, Kollai said, but in the case of Esterházy his anti-Semitism is not a strong issue, “because nobody can be sure whether it was genuine or only tactical behaviour”.

Kollai claims that there are Jewish survivors who were saved by the Esterházy family, and some of them even wrote letters to the Yad Vashem Museum in Israel to nominate Esterházy for the “Righteous Among the Nations” title.

Zemko admits that Esterházy might have helped some Jews who were threatened by the wartime regime in Slovakia but says “he was far from being alone in this praiseworthy activity in Slovakia, even among politicians”.

Views about whether Esterházy deserves to have a bust in Košice differ, just like the opinions about his historical role. Matica Slovenská, a state-supported cultural organisation, rejected the bust as tension-inducing, and some human rights organisations have protested against it due to Esterházy’s record of anti-Semitism. But historians are divided over the bust.

“I believe it is not justified,” Zemko said. “Esterházy, with his political and conspiratorial activities against the state of which he was a citizen, is not a good example for the present and the future of Europeans.”

Ivan Mrva, a historian at the University of Ss Cyril and Methodius, however, says that Esterházy’s conspiratorial activities are unconfirmed and in the end he was a victim of post-war hysteria in Europe. From that point of view, the bust is not problematic.

“The question, however, is whether this is not one of the Hungarian provocations that have grown in number – and we, Slovaks, are sensitive to that,” Mrva said.

Kollai of the Hungarian Cultural Institute said Hungarians are trying to avoid any provocation and believe that Esterházy can serve as an example for Slovaks of what Hungarians think about some historical issues.