ONE could say that the January 2009 gas-supply crisis, when Russian natural gas flowing from Ukraine into Slovakia was completely halted, changed the natural gas industry in Slovakia forever. The crisis highlighted questions about the security of the gas supply and in the process brought forward efforts to diversify sources, prompted a search for new supply corridors and confirmed the strategic importance of underground storage facilities. 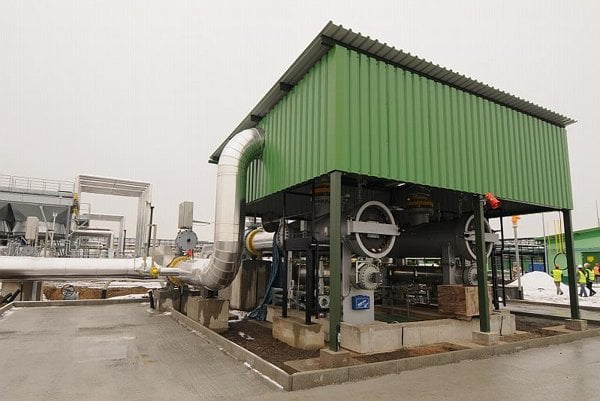 ONE could say that the January 2009 gas-supply crisis, when Russian natural gas flowing from Ukraine into Slovakia was completely halted, changed the natural gas industry in Slovakia forever. The crisis highlighted questions about the security of the gas supply and in the process brought forward efforts to diversify sources, prompted a search for new supply corridors and confirmed the strategic importance of underground storage facilities.

“During the January 2009 crisis underground gas storage facilities in Europe contributed significantly to stabilising the situation,” Ján Klepáč, executive director of the Slovak Gas and Oil Association, told The Slovak Spectator. “The situation in Slovakia was similar because during the first days of the crisis Slovakia withdrew gas from local underground storage facilities.”

All the currently used underground gas storage facilities, which are actually depleted deposits of natural gas and crude oil, are located in western Slovakia in the Slovak part of the Vienna basin. The gas is stored in porous underground storage facilities into which it is injected under high pressure.

Gas storage is primarily used for seasonal storage, that is, to balance the uneven consumption of gas between the summer and winter seasons. From May to October, gas is injected underground and during the winter season it is withdrawn.

But this has now changed somewhat as more and more gas traders are also using Slovak gas storage facilities.

According to Klepáč, Slovakia remains the most important transmission corridor for Russian gas moving to western Europe.

Slovakia’s transmission system is one of the biggest in Europe, with an annual capacity of 94 billion cubic metres, and many companies that transmit their gas via Slovakia also use Slovak gas storage capacities.

The history of gas storage in western Slovakia dates back to the 1970s, when construction of the complex of storage facilities at Láb began. At the end of 1990s its storage capacity was 1.7 billion cubic metres.

“Since 2003, when Nafta set out on the path of restructuring, it has managed to augment, by optimisation and new investments, the existing storage capacity to its current 2.2 billion cubic metres,” Martin Hollý, director general of Nafta, told The Slovak Spectator.

Nafta launched the three-phase, €166-million Gajary-Báden project, to turn a depleted hydrocarbon deposit into a modern gas storage facility in 2008, before the Russian gas crisis. The total storage capacity of the facility is projected to be 500 million cubic metres, increasing Nafta’s aggregate storage capacity to 2.5 billion cubic metres (200 million cubic metres of new capacity is already in use). The company expects to complete the second, most important phase of the project later this year. This phase includes construction of a gas distribution centre for the Gajary-Báden facility as well as gas treatment facilities. Nafta plans to wrap up the project in 2014.

“After the investment is complete, Slovakia will be among those countries with the highest ratio of existing storage capacity to actual natural gas consumption,” said Hollý.

Klepáč confirmed the strong position of Slovakia in gas storage, which after Gajary-Báden is completed should increase to 3.2 billion cubic metres.

“Slovakia has a very good position in terms of natural gas underground storage capacities,” said Klepáč, given that in theory it can store as much as 45-50 percent of its annual consumption of natural gas – between 5.7 billion and 6 billion cubic metres. But he pointed out that since the storage facilities are used not only to store gas for consumption in Slovakia but also by gas distributors and gas trading companies renting gas storage capacity on a commercial basis, this simple calculation should not be applied.

Slovakia is not the only country in the Vienna basin, which also comprises southern Moravia in the Czech Republic and eastern Austria, to use its suitable geological conditions to build gas storage facilities.

“Currently there are a number of underground gas storage facilities, with an aggregate storage capacity of about 7.5 billion cubic metres,” said Klepáč, adding that conditions exist to allow this volume to be increased by as much as 100 percent within the next five to eight years.

“This would be a really very important step for the whole region for security of gas supplies,” said Klepáč.

Slovakia also holds a strong position in gas storage within the Visegrad Four countries of Poland, Hungary, the Czech Republic and Slovakia.

Klepáč expects the aggregate capacity to increase in future years as Poland and the Czech Republic, as well as Slovakia, are also extending their facilities.

After the gas crisis ended, the Robert Fico government discussed building a state-owned underground storage facility to establish a state gas reserve, but later abandoned the plan as too costly.

With respect to gas storage, Klepáč distinguishes between seasonal, i.e. commercial gas storage, and strategic reserves. The latter are used only in the event of a crisis, as happened in January 2009.

“In Spain or Hungary such strategic reserves are in the ownership of the state and can be used only in event of a crisis,” said Klepáč. “In Slovakia such reserves do not exist.”

Moreover, there are some depleted deposits in Slovakia which could be turned into new storage facilities, even though not all their conditions are ideal and many technical questions need to be answered.

As Ladislav Goryl, director of Nafta’s underground gas storage division, told The Slovak Spectator in an earlier interview, the basic conditions for turning a depleted deposit into a gas storage facility are its permeability and its porosity. The porosity of the site determines the amount of natural gas that it can hold, while its permeability determines the rate at which natural gas flows through it. This in turn determines the rate of injection and withdrawal of gas. Other factors taken into consideration are the overall volume of such a depleted deposit, as well its tightness and retentive qualities, which determine how much stored gas might be lost.

According to Hollý, better conditions exist in western Slovakia and that is why all existing storage facilities so far are in this region, adding that his company will also analyse other opportunities.

According to Klepáč, one possible place where a new storage facility could be built is near Láb, the site of the existing facilities. He regards the location as promising, offering further capacity of between 0.925 billion and 1.250 billion cubic metres.

“The problem is that it is located at a depth of 2 kilometres,” Klepáč noted, adding that this would mean significant costs.

Other potential storage capacities are located near Sereď, according to Klepáč. He sees the locality as very attractive because it is very close to the pipeline transporting Russian gas into the European Union. However, again, there is a fly in the ointment: about 75 percent of the site’s capacity is currently filled with CO2. This is a greenhouse gas and no effective solution has yet been developed to deal with the large volume that would be expelled if the site was filled with natural gas.

According to Klepáč, one of the possible solutions is to use CO2 as the so-called base gas or cushion gas, which remains as permanent inventory in a storage reservoir to maintain adequate pressure and prevent underground water from flooding it. But, according to Klepáč, some experts warn that the very high pressure required to do this might lead to the destruction of the whole reservoir.

The third place where a storage facility could be built is in eastern Slovakia, close to the Slovak-Ukrainian-Hungarian borders, near the village of Ptrukša.

“This would be a relatively small facility, with estimated capacity of about 210 million cubic metres,” said Klepáč. “Nevertheless, during the crisis we realised that it would have helped Slovakia very much if it had had an underground storage facility in the east of the country because all the existing facilities are in western Slovakia and the transit system was built to move gas from east to west.”

Whether new storage facilities are built in Slovakia is a question of finding reasonable technical solutions, the amount of investment necessary, and the level of demand for gas storage. But current indicators suggest the market for gas storage will continue to grow.

“The trend in Europe is that the share of domestic gas production is decreasing, gas consumption is rising and thus dependence on imported energy is increasing,” Hollý said. “This results in an increased demand for gas storage capacities, to which operators of gas storage facilities are responding with development investments. Simultaneously, gas storage facilities are being used more and more to support the trade in gas, which further increases demand for storage. Nafta identified this demand and prepared its investment in Gajary-Báden in 2003, which is now being carried out.”