The documentary is dead: long may it live!

“DEATH to the documentary” was the slogan of the 2nd DOCsk festival, Slovakia’s only event devoted entirely to documentary films, which took place in Košice between April 13 and 16. 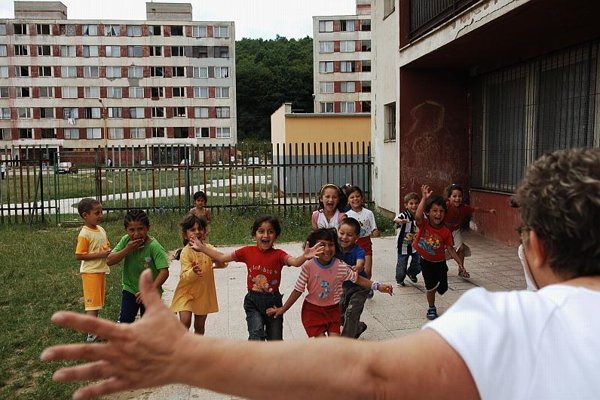 The kindergarten in Lunik IX, as shown in the British documentary movie Lunik IX. (Source: Courtesy of DOCsk)
Font size:A-|A+0

“DEATH to the documentary” was the slogan of the 2nd DOCsk festival, Slovakia’s only event devoted entirely to documentary films, which took place in Košice between April 13 and 16.

The main theme of the event – expressed via its seemingly paradoxical slogan – was inspired by Jan Gogola Jr, a Czech filmmaker who rejects the term “documentary film” because he believes it fails to encompass all the aspects of the genre, explained Ľuboš Bišto from the DOCsk team.

Gogola, who attended the festival in person, said during a lecture there that categorisation of artistic genres is the result of our feeble attempt to capture the world and that “we cannot discover new approaches in film, theatre and literature unless all labels and delimitations die out completely”.

A selection of Gogola’s films was screened within a special section entitled Long Live Film.

In total, 60 movies were showcased at DOCsk, including 14 premieres.

One of the highlights of the programme was the premiere of Lunik IX, a feature documentary by British director Michelle Coomber about a kindergarten in the middle of the eponymous Roma ghetto on the outskirts of Košice, which was held in the very place where it was shot.

“When we first visited Lunik IX, we were immediately fascinated by the contrast between the neighbourhood’s gloomy reality and the joyful atmosphere at the kindergarten,” said Dana Wilson, the producer of the film. “We therefore decided to make this movie to encourage those who live in Lunik IX to believe in their own future and help others understand that these people deserve to be treated with dignity.”

The festival also featured an exclusive premiere of the first episode of a planned 24-part TV series about the history of Slovak cinema, to be aired on Slovak Television (STV) later this year.

This first episode, directed by award-winning Slovak filmmaker Peter Kerekes, focuses on the role of public houses in Slovak movies.

Among the other topics dealt with in the upcoming series will be Sex and Eroticism, Slovak Princesses, Fear, and Jánošík (a folk hero often referred to as the “Slovak Robin Hood”), said Barbara Janišová Féglová from the Slovak Film Institute, a co-producer of the series.

“We wanted to avoid the elitist, academic ‘talking-heads’ style, and tried to find a more attractive framework; hence our decision not to follow a chronological scheme, but instead devote each episode to a particular theme,” Féglová explained.

In addition, visitors to DOCsk were allowed a glimpse into the origins of the documentary genre as practised in Slovakia through a series of unique screenings of The Line-Up, a newsreel produced in the period of the 1939-45 pro-Nazi Slovak State. It is considered to be the first locally produced documentary.

The shots were selected by film critic Petra Hanáková and provided by the archives of the Slovak Film Institute.

“I deliberately excluded from my selection all that was hard-core propaganda, potentates and high politics; instead, I wanted to focus on everyday life, culture and period curiosities, though propaganda was not completely absent from these domains either,” Hanáková observed.

Róbert Rampáček, who was responsible for the programme, said that apart from familiarising the audience with both the past and the latest trends in domestic documentary film production, one of the main aims of the DOCsk team was to “create a platform for filmmakers to exchange ideas and discuss their works”.

“In the future, we wish to expand this idea, and organise similar meetings at least twice a year,” Rampáček told The Slovak Spectator.

He added that the ultimate goal of DOCsk is to become a year-long initiative rather than a one-off event, and perhaps to make Košice – which will be a European Capital of Culture in 2013 – a national hub for documentary filmmaking.

As part of this effort, film fans can look forward, for example, to free open-air screenings of documentary movies in Košice, as well as in other cities around eastern Slovakia, this summer, his colleague Ľuboš Bišto added.

“Until recently, not much attention has been paid to documentary films in Slovakia, presumably because they are not as interesting for the media as feature films with higher budgets and attractive casts,” Martin Ciel, a film critic and associate professor at the Academy of Performing Arts in Bratislava, who was among the guests, told The Slovak Spectator.

“I am therefore very glad that the attitude towards this genre has been changing thanks to events such as DOCsk, particularly now when – in line with the slogan of the festival – the strict borders between different film genres have finally started to disappear, and Slovak documentary filmmakers have dared to experiment and go beyond conventions,” Ciel concluded.