'US Ambassadors of Goodwill' tour Slovakia

“A SQUARE peg in a round hole” – this is how the members of the United States Air Forces in Europe (USAFE) Band, one of the US military ensembles, are sometimes described in their concurrent roles as musicians and military officers. But after attending one of the five gigs the band recently gave in Slovakia, one would say “a fish in water” is a much more fitting epithet. 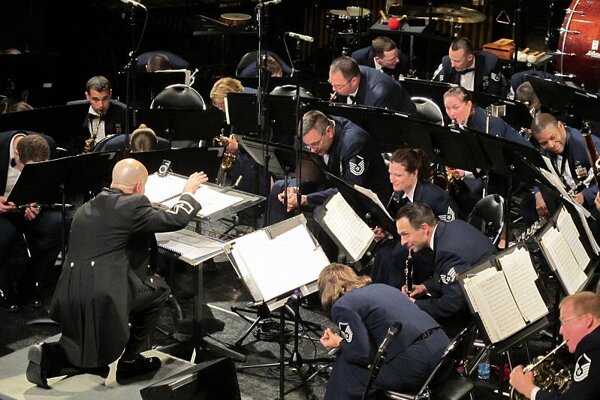 “A SQUARE peg in a round hole” – this is how the members of the United States Air Forces in Europe (USAFE) Band, one of the US military ensembles, are sometimes described in their concurrent roles as musicians and military officers. But after attending one of the five gigs the band recently gave in Slovakia, one would say “a fish in water” is a much more fitting epithet.

Stationed at Sembach Kaserne, Germany, “America’s Ambassadors of Goodwill” perform live concerts for more than 1.2 million people each year throughout Europe, Southwest Asia and Africa. The 45-member squad, with a performance tradition now spanning six decades, is the only Air Force band stationed in Europe.

In line with their aim to “communicate Air Force excellence” and “enhance public trust and support”, the ensemble toured Slovakia between May 4 and 9, visiting Bratislava, Nitra, Prievidza, Lučenec and Banská Bystrica, and drawing around 1,400 appreciative people in all.

According to Chris Scharf, public affairs officer at the US Embassy in Bratislava, which supported the USAFE tour, military bands are a very important part of US culture.

“At major holidays tens of thousands of people gather in our nation’s capital to hear one of the military bands play popular and patriotic music followed by spectacular fireworks over the Washington Monument,” he told The Slovak Spectator. “Military bands contribute to national unity and members of these bands often come from prestigious conservatories and schools of music in the United States.”

Scharf further explained that “the Air Force Bands programme will always be associated with the name of the famous band leader and a major in the US Army Air Force – Glenn Miller – whose plane disappeared while flying over the English Channel to Paris to play for soldiers there”.

Of course, the USAFE’s Slovak show also included a piece by Miller: his famous In the Mood was the closing performance in the two-hour programme.

But the music offered by the ensemble encompassed many different styles, from classical music to American big-band jazz, pop and famous Broadway tunes.

The programme included pieces such as Symphonic Metamorphoses by Paul Hindemith, an aria from The Barber of Seville by Gioachino Rossini, selections from West Side Story by Leonard Bernstein, and Defying Gravity by Stephen Schwartz, the signature song from the musical Wicked.

“We try to bring as wide a variety of music to our audiences as we can,” said Major Matthew Henry, commander and conductor of the USAFE band. “My concept is that the first half is usually of a more formal, ‘European’ style, though we still try to feature American music, the consensus being that this is what people are looking for. Then in the second half we try to do more of a Broadway show concert, where music just keeps coming and is more pop-oriented.”

Though many people may find the combination of music and the military as a little odd, working as a musician in the US Air Forces Band has many advantages compared to a civilian orchestra, Henry told The Slovak Spectator.

“I think that I have greater latitude with my folks than I would if this was a civilian organisation: if, for example, we need an extra rehearsal time for whatever reason, we simply get it, while in a civilian orchestra, there would be extra pay involved, I would have to contact the unions, and so forth,” Henry remarked.

And he added that being in a military band involves responsibilities that are more varied, with only around one-fifth of an officer’s time spent on the musical side and four-fifths on the military leadership side.

“I am not sure in nearly fifteen years that I’ve had an average day,” he added.

Staff Sergeant Rachel Trimble, a vocalist with the USAFE band, said that military ensembles are also very particular with regard to their mission.

“The reason we perform is not for profit,” she told The Slovak Spectator. “It is for building partnerships, delivering the Air Force message and enhancing a relationship between the United States and other countries through music, which is the universal language that brings people together.”

According to Dana Polčíková from the US Embassy, the musicians followed this mission in Slovakia on- and off-stage alike.

“Every time we arrived in our venues both male and female members of the orchestra put on their working gloves and helped unload the trucks that carried their instruments and equipment; then each of them sat behind their music stands, gave outstanding performances, and, after the concert, again loaded the trucks as if this was completely natural,” she said.

“I think that what they brought to Slovakia was not only gorgeous music but also a message of goodwill and friendship.”