Walking with pride, once again

LESBIAN, gay, bisexual and transgender people, as well as supporters of diversity, planned to gather in Bratislava’s largest square on June 4 to demonstrate their solidarity and perhaps in some way repudiate the tumultuous and troubling experiences of a year ago when the first Rainbow Pride Parade was held in Bratislava. 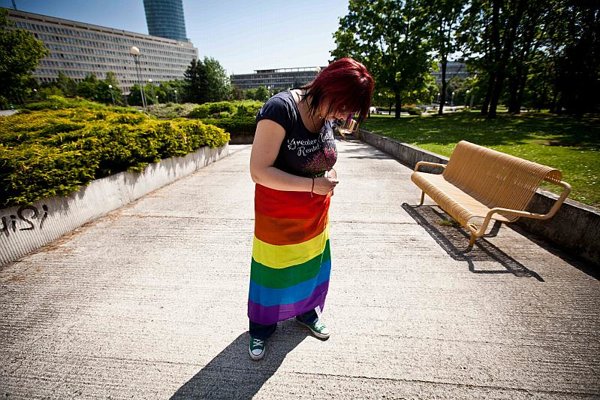 LESBIAN, gay, bisexual and transgender people, as well as supporters of diversity, planned to gather in Bratislava’s largest square on June 4 to demonstrate their solidarity and perhaps in some way repudiate the tumultuous and troubling experiences of a year ago when the first Rainbow Pride Parade was held in Bratislava.

As The Slovak Spectator went to press, the programme for 'the Pride', as Slovaks refer to it, called for opening ceremonies and speeches in Hviezdoslavovo Square by the event organisers, several members of the European Parliament and foreign ambassadors who are supporting the event.

The parade has the official backing of the embassies of the UK, Norway, Finland, the Netherlands, Ireland, Spain, Switzerland, and France.

“We, as members of the international community, stand both literally and figuratively with parade participants as they peacefully assemble to stand up for their human rights, and raise awareness of the LGBT community in Slovakia,” reads the joint statement signed by 20 ambassadors. “Everyone, including LGBT people, should be free to enjoy the rights and freedoms laid out in the Universal Declaration of Human Rights. ”

Despite fears inspired by violence at last year’s march, when anti-gay extremists attempted to disrupt the parade, Romana Schlesinger, one of the organisers, told The Slovak Spectator prior to the march that they expected a bigger crowd than last year, when an estimated 1,000 people took part.

“We believe that our allies in the straight community will come out in greater numbers to support the Pride,” Schlesinger said.

Security measures will be tighter than last year, including a doubling of the police presence to approximately 400 officers. The organisers will also not release the exact route of the Pride march until just before it begins.

“Three alternative routes have been planned and the decision on which to take will be made right there on the spot,” Ľubomír Andrassy, the spokesperson of Bratislava Mayor Milan Ftáčnik, told the Sme daily.

Unlike last year, the recently-elected mayor is taking a lead in the security measures surrounding the Pride march. Andrassy said several other events have been cancelled in Bratislava on that day to make sure there will be enough police officers on hand to maintain public order in the streets.

Mayor Ftáčnik, who was elected to his post in autumn 2010, announced that he was planning to join the march as well.

The first Rainbow Pride gathering took place in Bratislava on May 22 last year. When several hundred supporters of the event gathered in Hviezdoslavovo Square, around 100 anti-gay protesters attacked the gathering by throwing tear-gas canisters, rocks and eggs at the audience as well as the speakers on the stage.

In response to the attacks, the Pride organisers modified their plans, including the route of their march. Though the original plan was to parade through the streets of Bratislava’s Old Town, the Pride participants wound up marching only from the downtown square across the New Bridge that spans the Danube River to a ship anchored on the southern bank where they staged an after-march celebration.