AN OLD Slovak proverb says that the more languages you speak, the more times you are human, meaning that they make you a better person. Despite its antiquity, this saying is echoed in the modern trend for learning several foreign languages. As a recent study by the Institute for Public Affairs (IVO) found, half of all people living in Slovakia claim to speak – at least to some extent – two or more foreign languages; and only 19 percent speak none of the six most widely-spoken foreign languages. 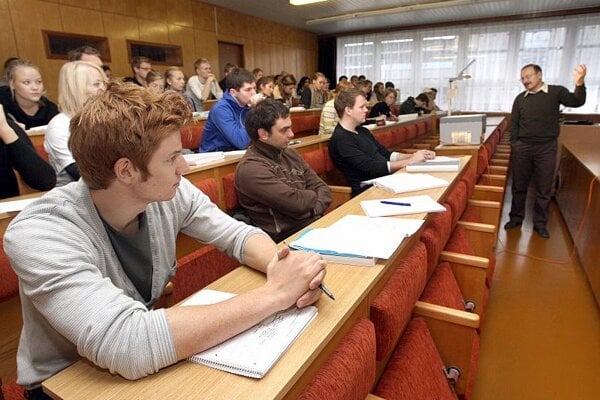 AN OLD Slovak proverb says that the more languages you speak, the more times you are human, meaning that they make you a better person. Despite its antiquity, this saying is echoed in the modern trend for learning several foreign languages. As a recent study by the Institute for Public Affairs (IVO) found, half of all people living in Slovakia claim to speak – at least to some extent – two or more foreign languages; and only 19 percent speak none of the six most widely-spoken foreign languages.

From the point of view of level of knowledge, English is the most prominent language, followed by German. The study was initiated by the Goethe-Institut and supported by the German Foreign Ministry.

The Goethe-Institut (GI) is an institution of the German Federal Republic which promotes and spreads not only the German language, but also German history and culture abroad, including in Slovakia. The German language has always had a strong presence here, thanks to this country’s geography and history. During the Austro-Hungarian Empire, it was one of two official languages, but both before and since this period the closeness of Austria has strongly influenced the country, especially its western part. In central and eastern Slovakia, waves of German immigrants – many, but not all of them miners – have left noticeable traces, in local names as well as in people’s lifestyle and traditions.

During the communist era, listening to Austrian radio and watching Austrian TV broadcasts was one of the few ways to obtain accurate information, given the propaganda broadcast via the official media. Currently, of course, these influences have diminished, but the prominent presence of German and Austrian companies and the opening of the labour markets of these two countries have highlighted the importance of learning the language. The GI also supports multilingualism (by organising the Language Café event and through cooperating with other cultural institutions in Slovakia) and early teaching of foreign languages.

According to data provided by the Goethe-Institut, the number of students on German-language courses is continuing to grow, as is the number of people undergoing tests aimed at getting an internationally-recognised certificate. Also, many students of secondary schools seek to obtain some kind of German-language certificate, be it a school-leaving exam or some other type.

For those who have already learned some German and who want to enhance their knowledge the Language Café represents one opportunity. Every first Wednesday in the month, several embassies organise an exchange in various languages, including German. Competitions for young learners, like German for Clever Minds, a scientific contest for German beginners, are designed to attract students to the language.

The Goethe-Institut also seeks to bring German artists to Slovakia. Examples include: Gisbert Stach from Munich, at Hommage á Erna Masarovičová; eight artists from Munich who will take part in the Collaboration 4 mobile project at 'Banská St a nica' in Banská Štiavnica; Danica Dakič and her multi-sensual works; and Einar Turkowski and his creative workshops at the Biennial of Illustration Bratislava (BIB).

The Košice Artist-In-Residence project within the Košice, European Capital of Culture 2013 programme, has brought Urbanartist (an artistic duo) and Maya Schweizer from Germany to the eastern Slovak city for three months to create, cooperate with locals and involve the public. Visual arts need no translation, like music, so it is also easier to present musicians from Germany, such as Marc Jaquet, who will play within the Ivan Sokol International Organ Festival; Till Brönner, at the Bratislava Jazz Days; and Friedrich Gauwerky from Cologne, at the Orfeus student musical festival.

On the other hand, literature needs some language skills – or a good translator – but exchanges in this sphere are vivid, too, and popular among Slovaks. In September and October, Daniela Seel and Tom Schulz will participate in the Ars Poetica International festival and Christina Viragh will tour Slovakia and discuss her own works and translations. Some new literary translations will also be launched and the Literature In Flux project fuels discussions about literature in the region of the Danube River.

Another popular artistic form is film, which inconspicuously promotes foreign culture and language. The Cinematik international movie festival taking place in Piešťany in September will screen a film by a legend of expressionism, Fritz Lang's M (A Murderer Among Us) dating from 1931. The Inakosť gay- and lesbian-themed film festival will show 3 (Drei) by Tom Tykwer (2011), Romeos by Sabine Bernardi (2011) and Fremde Haut (Strange Skin) by Angelina Maccarone (2005).

In 2011, the institute has co-organised or taken part in several musical projects (especially in classical and choir music), artistic exhibitions, the SHaPiNG The NeW artistic residence in Košice, theatre performances (like the puppet theatre from Dresden at the International Puppet Festival), movie screenings, festivals (Early Melons, Fest Anča), literary exhibitions, readings, discussions and other events.

The Goethe-Institut also helps to train German-language teachers, both for German as a foreign language and German as a minority language, and to establish partnerships between Slovak schools and schools abroad. It tries to find ways to make learning German fun and motivating. In September, library services are being enhanced with an online-library called Onleihe where anyone registered with the GI library can borrow e-books, e-magazines, or videos for a PC, iPad or tablet device.

Thanks to these activities, as many as 80 percent of Slovaks think that speaking more foreign languages than just English is important; and the same percentage believe that the best chance of succeeding in the German and Austrian labour market lies with those who can speak the local language. Apart from these data, the IVO study of foreign-language learning showed that 88 percent of people in Slovakia consider mastering the German language to be important. It seems that in the central-European context, German remains a strong influence and phenomenon, regardless of oscillations in popularity caused by geo-political and historical developments.