2013, the year when Košice is to become a European City of Culture (ECOC), is soon approaching, and residents of the city claim that in the past two years, since the city was so designated by the EU, significant changes have occurred that are making Košice a cultural centre for the whole country. But the winds of change have also been swirling within Košice 2013, the non-governmental organisation that is responsible for managing the city’s ECOC efforts. 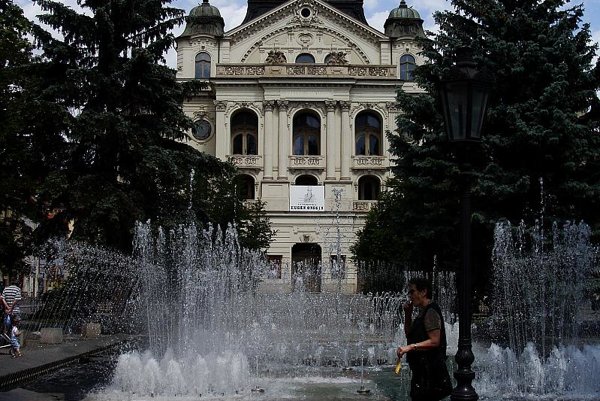 2013, the year when Košice is to become a European City of Culture (ECOC), is soon approaching, and residents of the city claim that in the past two years, since the city was so designated by the EU, significant changes have occurred that are making Košice a cultural centre for the whole country. But the winds of change have also been swirling within Košice 2013, the non-governmental organisation that is responsible for managing the city’s ECOC efforts.

In May, Zora Jaurová was removed as the director of the project and replaced by Ján Sudzina. This happened after Košice 2013 suggested that the powers of the managing director be divided between two persons: a project manager and an art director. Jaurová was originally chosen to be the art director but failed to get that position after a disagreement surfaced between the management and the administrative board of Košice 2013 over how to select the person for the position. The NGO’s management group wanted the art director to be appointed but the board agreed on a new organisational structure that required managers of the project to be selected through public channels.

After that change, Jakub Urik, who had served as the lead manager for international relations, was designated as the head of the development projects section. Peter Sokol, with previous experience in marketing and campaign management for the Košice women’s basketball team, became head of the marketing and fundraising section and Martin Petro became the head of the section for finance, administration and public resources, after previously serving as the head of the economic department at the Children’s Faculty Hospital in Košice, the SITA newswire reported. Košice 2013 is still searching for an art director as well as the head of the art and programme section, SITA wrote in early August.

A project of transformation

The ECOC programme was launched in 1985 by the Council of the European Union, and more than 40 cities have earned the accolade since then. In 2013, Košice will share the title with Marseille, France, which has made the links between the two cities particularly strong. But partnerships have also been developed with many other cities and regions of Europe.

Though the project has been accompanied by fierce debates on how the €63 million awarded to Košice should be used, local residents seem to be uniformly pleased about their hometown’s success.

“Five years ago, people used to head to Bratislava when they wanted to enjoy some kind of cultural activity. Today, it is Košice that creates the buzz,” said Júlia Gergeľová, 24, a student in English and Italian, who often volunteers at ECOC-related events. “Also, I have noticed that even people previously uninterested in arts have started attending exhibitions and concerts. That, in my opinion, is the best thing about our having won the title: it has been changing the city from within.”

Change is, indeed, both a tool and an end in itself. Christian Potiron, 33, a cultural manager from France, joined the Košice ECOC team in 2008. (The selection process usually takes place six years in advance). He has lived in Slovakia for 10 years and speaks impeccable Slovak with an endearing French accent.

“The ECOC initiative is first of all a project of transformation of a city through culture,” Potiron said, adding that the main idea is to “recycle” existing infrastructure in order to create new cultural venues.

A large part of the budget has therefore been invested in the renovation of an old barracks on Kukučínova, a five-minute walk from the Main Street. The Captain Jaroš Barracks dates from the end of the 19th century and is set in a historical park with an area of 17,000 square metres. Before they became part of the Košice ECOC project, the buildings had been used as warehouses by the Slovak military.

In 2009 the complex was renamed Kasárne Kulturpark, or simply Kasárne (‘the Barracks‘), and quickly became a lively cultural venue with a calendar full of concerts, exhibitions, screenings, workshops, and lectures.

“The area of Kasárne is amazing,” said Tomáš Džadoň, a 30-year-old artist, during the opening of an exhibition there. “If this place was in Prague, they would drool over it.”

However, the recent bad news is that after two years of successful operation in half-renovated premises, the Barracks have now been closed to complete the reconstruction and prepare them for the impatiently-awaited 2013. As soon as the complex is re-opened, the Barracks will also serve as a residency for foreign artists visiting the city and wishing to draw inspiration from it.

Another major investment within the ECOC project will go into what is called SPOTs, a network of small, community-managed cultural venues throughout Košice’s suburbs. These will be housed in former heat exchanger stations, which used to supply hot water to housing estates but have been long unused as technology has progressed.

Out of the 156 stations in Košice, about 20 are to be converted into community centres. The first of them, the Pink Heat Exchanger on Obrody in the neighbourhood of Terasa, was opened in March 2010, while the others are being reconstructed and should start operating throughout 2012.

At the Pink Heat Exchanger, all types of events take place three to four times a week – from body-painting fashion shows to exhibitions of children’s works, and from culinary workshops to graffiti art sessions.

Again, some exchanges will be residential, so that artists can create their works of art directly there: that is, on the SPOT.

More ECOC money will finance the conversion of the abandoned swimming pool on Rumanova into a large gallery entitled ‘Kunsthalle’, the revival of the embankment of the River Hornád, and the renovation of the dilapidated amphitheatre on Festivalové námestie. The amphitheatre could once seat 10,000 people and after its renovation its capacity will be reduced to around 4,000 seats.

St Elizabeth’s Cathedral, Hrnčiarska Street, as well as the park on Moyzesova will also undergo renovation. But the development of cultural infrastructure is only one part of the ECOC project.

“An equally important challenge is changing the way culture is regarded by residents through exposing them to various forms of art in public spaces,” Potiron, the cultural manager, said.

Therefore, many ECOC events will take place in the streets and are aimed at involving audiences to the greatest possible extent. The prime example is Košice ECOC’s flagship “Use the City festival”, held annually at the end of May, which offers events such as concerts on trams under normal operations, open-air literary soirées, or theatre performances in shopping centre car parks.

Another festival, Nuit blanche (White Night), takes place in early October, and features exhibitions and performances available throughout the city centre after sunset and during the night. In 2010, when the first edition was held, the programme included a concert at a swimming pool accompanied by special lighting effects and an installation of thousands of plastic spoons illuminated with LED lights spread all over the City Park.

The 2013 cultural agenda will of course feature similar events, multiplied by a thousand. Organisers, however, remain guarded about the details of the programme “for strategic reasons”.


“The programme is still being finalised and cannot be made public yet,” said Jozef Môcik, 27, an event manager for Košice ECOC.

A progressive type of beauty

For all its diversity, Košice remains a medium-sized town and its possibilities in terms of both budget and capacity are obviously limited in comparison with big European capitals such as London, Paris or Berlin. So why would someone who comes from Paris, which is supposed to be Europe’s most beautiful and lively city, choose to live in Košice?

“There are different types of beauty,” said Potiron. “Of course, if you like Paris by night with all its lights, you will not find that here; I think that Košice’s beauty dwells in relations with people and in how these can make you move forward – and my experience here has made me move forward.

“Košice is a city on the move, with many things changing, and being part of the change is much more attractive than to live in a city that is already established,” Potiron said.