EVEN though 22 years have elapsed since the fall of the communist regime, some issues linger from then and are still unresolved. One of these is the issue of regulated rents in properties which were confiscated by the communist state but then returned – but with their sitting tenants – to their pre-communist owners in the post-1989 process of restitution. 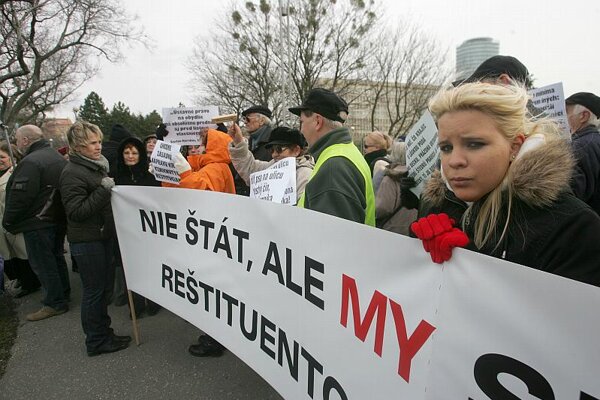 EVEN though 22 years have elapsed since the fall of the communist regime, some issues linger from then and are still unresolved. One of these is the issue of regulated rents in properties which were confiscated by the communist state but then returned – but with their sitting tenants – to their pre-communist owners in the post-1989 process of restitution.

Earlier this year parliament passed a new law intended to resolve the dispute. However, the Act on Termination and Settlement of Specific Rental Relations has satisfied neither side. Tenants claim that it is discriminatory and will produce more homeless people, while the owners of the buildings complain that they will be forced to wait up to five more years before they can charge a true market rent for their property.

The history of the issue goes back to the communist regime, during which housing was mostly managed by the state. After the communist takeover in 1948 and the subsequent nationalisation of property, the state rented empty residential units in confiscated properties. When the regime fell in 1989, these properties were returned to their former private owners, leaving both tenants and owners in a trap.

The tenants, through no fault of their own, and unlike other occupants of state housing post-1989, were not able to acquire the property they lived in for a symbolic price. They were also left in a state of uncertainty about future rent, as most of the houses returned to former owners are in desirable locations. On the other hand, the owners complain that the presence of tenants means that their properties have not been fully returned, and say they cannot afford to invest in the buildings because the rent that tenants pay is regulated.

Based on the new law, which became effective on September 15, owners are permitted to increase the regulated monthly rent, but only once a year, and by no more than 20 percent, until the end of 2015. Owners will then be allowed to charge market rates or use the property in any way they want. Additionally, owners are permitted to terminate a rental contract with a tenant for any reason by March 31, 2012; the tenant must then vacate the property within one year, the SITA newswire wrote.

After adoption of the law, complaints were heard from municipalities which warned that they would be forced to shoulder the main burden since the law made them responsible for securing substitute housing for people asked to leave their homes.

The ministry has estimated that as many as 923 apartments with around 2,300 tenants are involved, with 706 of these apartments in Bratislava, mostly in the Old Town district, according to the SITA newswire.

“By the adoption of the new law, the will was finally found to resolve the unsustainable state in which tenants were in constant uncertainty about their housing situation and on the other hand owners of those properties were not able to use them,” Táňa Rosová, mayor of the Old Town district of Bratislava, told The Slovak Spectator. “The whole burden for settlement of this problem was transferred onto municipalities.”

The Old Town district will search for a solution in cooperation with Bratislava City Council as it said it is not able to tackle the problem alone. It plans, among other things, to reconstruct old apartments in its ownership and rent them to those tenants whose rental contracts are terminated. For now it does not know the exact amount of substitute housing it will need, but expects to find out only after the deadline passes for applying for substitute housing in September 2012.

Kristián Straka, of the Right to a Dwelling civic association that represents tenants, said he expects the situation to become what he termed “interesting” after March 2012, when the deadline for terminating a rental contract with a tenant for any reason will lapse and when rentals can be increased by up to 40 percent.

Right to a Dwelling has campaigned against the new legislation publicly and has communicated its dissatisfaction to politicians, but without, it says, any positive outcome.

“The law does not solve the problem of tenants; it only worsens their situation,” Straka told The Slovak Spectator. “Tenants in property restored to their owners, as the only ones in Slovakia and through no fault of their own, were not able to become owners of their homes while the rest of the population had this chance for a symbolic price. Instead of adequate compensation the state has decided to force these people to move into social apartments, which those responsible for building them do not know when, where or how they will build them.”

Straka argued that the new law discriminates against some tenants, for example those who fail to meet the property criteria to qualify for a substitute dwelling.

The owners of the returned buildings also oppose the concept on which the new legislation is based. Karol Spišák from the Civic Association of Owners with Regulated Rentals summed these up for The Slovak Spectator, highlighting that the new law needlessly prolongs the regulation of rents by an additional five years. He said that the annual 20-percent increase in rents, which he said do not now cover costs, is completely insufficient.

“The regulated monthly rental for a 100-square metre apartment in the centre of Bratislava is €100,” Spišák told The Slovak Spectator. “After a 20-percent rise this will be €120, while the market rental is about €800-€900. Who will compensate the owner for this loss?”

The association proposes the complete cancellation of regulated rents and that a state contribution is instead made to cover the rental payments of socially vulnerable people. But the state should not support those people who have been profiting from this situation for years, Spišák said.

The owners of returned properties believe that their constitutional rights have been violated and have already submitted five multiple applications to the European Court of Human Rights. They are seeking payment of damages of at least €50,000 each, as well as compensation for losses incurred, i.e. the difference between the market and the regulated rent. Spišák expects that the court could issue its first verdicts in the spring of 2012.

“The Slovak Republic currently faces complaints at the European Court of Human Rights [ECHR] which in terms of the number of applicants and especially in terms of the amount of damages sought, do not have any parallel in the history of Slovakia,” Spišák said, adding that damages might total tens of millions of euros.

Spišák believes that it was applications submitted to the court in Strasbourg which forced the Slovak government to deal with this issue while previous governments, despite declared commitments to cancel regulated rents, kept postponing a comprehensive solution.

“Without the submitted applications, the state would not resolve this matter,” said Spišák. “It is stunning that the Slovak Republic is addressing this problem not because it violates the basic rights and freedoms of Slovak citizens… but because it needs to minimise the damages threatened by the [court] applications.“