THE 20th year of the Febiofest international film festival will feature a host of movies, both feature length and short, and documentaries. Febiofest was the brainchild of filmmaker Fero Fenič, a Slovak native who has been living and working in the Czech Republic for decades. This year the Slovak part will open in Bratislava before continuing on to the other regions. 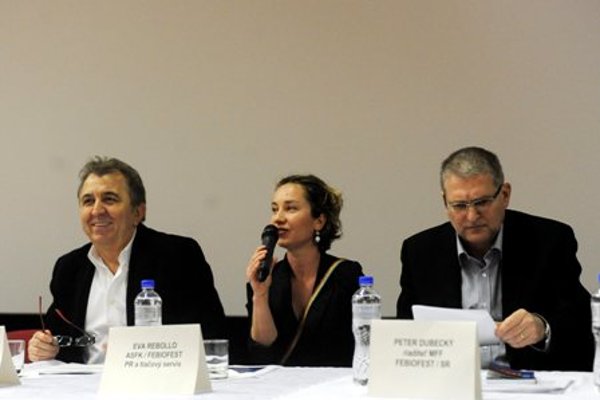 THE 20th year of the Febiofest international film festival will feature a host of movies, both feature length and short, and documentaries. Febiofest was the brainchild of filmmaker Fero Fenič, a Slovak native who has been living and working in the Czech Republic for decades. This year the Slovak part will open in Bratislava before continuing on to the other regions.

“I am very glad – and also surprised – that from a small event basically meant for friends, it grew into a big festival that runs separately in both neighbouring countries and has lived to see its 20th anniversary,” Fenič said at a press conference introducing the festival. “I have had some times of crisis, and even now we start each year anew, searching for new sponsors and partners from point zero, unlike other festivals that have grants spanning several years.”

He also praised the initiative of the head of the Slovak Febiofest, Peter Dubecký, who joined Fenič in the early years of the festival and who also persevered during the more dire years of Slovak cinema and TV production to help it become an annual independent project.

“We saw the festival, especially in the beginning, as a kind of bridge of cooperation between Czechs and Slovaks,” Dubecký recalled.

In 2013, Febiofest will take place in Bratislava between March 15 and 21, opening at the Lumiére cinema with the film My Dog Killer by director and writer Mira Fornay. The film recently received the main Hivo Tiger Award at this year’s International Film Festival in Rotterdam.

Film buffs will get the chance to see 130 movies of various lengths and genres this year, mainly European in origin, but with a focus on Czech and Slovak films, Eva Rebollo of the Association of Slovak Film Clubs said. Films will be screened in five venues and divided into 13 sections, including a brand-new one: the Competition of Short Films from the Visegrad Group countries, in which 20 films shorter than 30 minutes will compete, five from each of the V4 countries (Poland, Hungary, the Czech Republic and Slovakia).

There will also be the Klubový jukebox / Club Jukebox section, which will feature five hits selected by movie-club-goers. There will also be sections presenting profiles of three renowned directors, Czech Jiří Menzel, Austrian Michael Haneke and Hungarian Bence Fliegauf. To mark the 50th anniversary of the Slovak Film Institute and the 100th anniversary of Slovak dissident writer Dominik Tatarka, the cult movie Panna Zázračnica / The Wonder-Maid, based on his novel and directed by Štefan Uher in 1966, has recently been restored and will be screened at the festival. Other sections include Czech and Slovak Documentaries, European Panorama and Contemporary Polish Film.

After Bratislava, some of the films featured in the festival will travel to Trenčín, Banská Bystrica, Martin, Prievidza, Trnava and Prešov. Detailed info - unfortunately only in Slovak - can be found at www.febiofest.sk.