US cuisine: Eating the rainbow

RED, yellow and green bell peppers, deep pink salmon, reddish-brown pieces of steak, amber pineapple and lawn-green zucchini slices framed by forest-green beans, all on a floral-white tablecloth: this was not an arrangement for a still-life painting, but rather, preparations at the residence of the US ambassador to Slovakia for an activity the ambassador, Theodore Sedgwick, called “quintessentially American”: grilling. 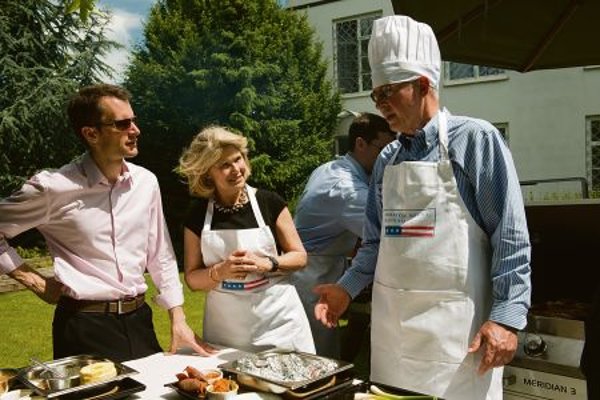 “America is a nation of immigrants, so we have food from all over the world, but what makes the US food unique, I think, is one thing: the grilling process,” Ambassador Sedgwick said while mixing the brown sugar, paprika, chili powder, ground cumin, coffee and curry powder to season the salmon he was about to grill for the Cooking with Ambassadors programme.

While explaining the significance of grilling to his guests, Sedgwick asked them to picture Americans celebrating the 4th of July outdoors on a sunny day, suggesting that people in the United States usually grill on festive, social occasions.

“Many people will have their neighbours over for hotdogs and hamburgers,” said Sedgwick, adding that “something that grilling does in America is that it brings communities together – neighbourhoods and families – since everybody can participate with children running around”.

According to the Sedgwicks, the question ‘I am grilling – do you have any food that you want to put on the grill?’ will sound familiar to many Americans, as will the menu the ambassadorial couple chose to give readers a peek into American cuisine: blackened salmon, grilled rib-eye steak with spinach and corn-stuffed sweet potatoes and grilled garlic seasonal vegetables.

“We call this ‘Surf and Turf’ which means with a little fish and a little meat,” said Kate Sedgwick, the wife of the US ambassador, describing the prepared dishes.

Whenever people outside the US think of American food, they think of doughnuts or fast-food chains. Yet, the Sedgwicks say that there is now much more public awareness of the problem of obesity and people are being encouraged to eat healthier food.

“We call it eating the colours of the rainbow,” said Kate Sedgwick, explaining that this concept actually encourages Americans to consume a wider variety of vegetables and, most importantly, fresh food, while pointing to the colourful assortment of vegetables and ingredients her husband was grilling.

Exchanging white bread for brown, or just switching from white rice to brown rice, can already help, according to Kate Sedgwick.

The ambassadorial couple said that even fast-food chains are catching on to the idea that Americans are increasingly aware of nutrition.

“Americans are now much choosier when buying fast food,” Kate Sedgwick said, adding that “consumers are speaking and the industry is listening to what they want”.

The Caesar salad that Ambassador Sedgwick prepared would definitely pass the healthy food test. Matt Miller, the press attaché for the embassy, who skilfully turned the zucchini slices on the hot grill, later explained that even this dish is American in origin: it was invented by an Italian immigrant who operated restaurants in Mexico and the US. In fact, according to Wikipedia, the daughter of the immigrant invented the dish when a 4th of July rush depleted the kitchen’s supplies.
“It doesn’t get more American than that,” commented Miller.

Ambassador Sedgwick enjoys game meat as well, adding “whatever I hunt I will eat; I will never waste anything, because any life is valuable”. In summer in the US, Sedgwick likes to fish for bluefish and striped bass, he said.

Here in Slovakia, the ambassadorial couple like the local cuisine, including one of the country’s national dishes: bryndzové halušky.

“I know that people who eat it either like it a lot, or they don’t like it at all, and I really liked it, and so I like to try it in different parts of the country,” Ambassador Sedgwick said. Kate Sedgwick promptly admitted that her very first experience with bryndzové halušky, which she had in Bratislava, was not positive at all, but when she had it near Košice, she became a convert to the dish and could have eaten two helpings.

Ambassador Sedgwick noted that both Slovakia and the US are known for their great wine, adding that in Slovakia “there has always been viticulture here, back to the Roman times”. He is proud of California and Oregon wines, while the less well-known vintages of Virginia, where he and his wife have their US home, also make his list of favourites.